For our Holiday Test Kitchen 2012, we asked Pineapple Grill’s hot new executive chef, Isaac Bancaco, to do the honors in guiding Maui No Ka ‘Oi’s staff through the preparation of a four-course feast. The innovative chef enthusiastically agreed to share a few of his favorite recipes.

On the appointed day, Chef backed into my driveway with his truck and unloaded crates of pomegranates, bushels of kale, stacks of labeled containers with assorted ingredients, and four plucked ducks complete with heads, beaks and webbed feet.

“I ordered these special from Maui Prime,” he declared happily, adding that they were just like the ducks with which he had helped his mentor, Ming Tsai, prepare for the Food Networks’ Iron Chef, Battle Duck, in 2004.

It took me a while to warm up to the undressed ducks. At first their useless extremities reminded me of cliche comedy props, but at some point during the multiple stages required to transform the poultry into delectable Peking duck, I developed a fondness for the doomed critters. As Chef later explained, leaving the feet on the duck honors the bird; leaving the head on is essential to proper preparation. Now that I understand, I could not have duck any other way.

Note: Traditionally, Peking duck is prepared twenty-four hours prior to cooking. Chef Isaac started one bird the day before, and while all of them were delicious, the bird with the head start tasted best. 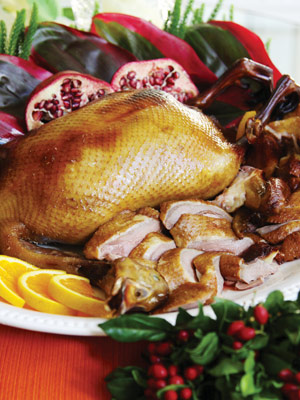 SPECIAL EQUIPMENT: Chef Isaac used a small air compressor to separate the duck’s skin from its meat and fat. This allows the skin to roast crisply and the fat to drain so the meat isn’t greasy. You can find similar compressors at hardware stores for around $25, but if you prefer doing things the hard — er, traditional — way, blowing into a straw can achieve the same effect.

Combine salt and Chinese five spice and season the ducks thoroughly from head to feet with the mixture. Rough-chop the orange, ginger and scallion, and stuff into the cavity of the ducks. Seal closed with wooden skewers. Refrigerate ducks one hour.

Set up the air compressor. Place the nozzle between the meat and fat layers through a slit you’ve made at the neck of the duck. Cover the openings in the neck and tail tightly with kitchen towels, holding the compressor hose firmly in the neck cavity, and start the airflow. Inflate until the skin separates from the meat.

Heat the 6 “bath” ingredients in a large wok. In a separate stockpot, boil 2 gallons of water. Immerse each duck in the boiling water until the skin visibly tightens. Now bathe the ducks in the shoyu mixture until they “tan.” Hang them to dry for 24 hours. If you don’t have a walk-in cooler, place the ducks breast side up, uncovered, in the refrigerator. The dryer they become, the crispier the skin will be.

Once the ducks are dry, bake in a 350° oven 30 to 40 minutes until skin is extremely crispy. Serve with your favorite Hoisin sauce.

While the ducks cooked, Chef Isaac prepared this mouthwatering Portuguese confection as an appetizer. Cornmeal and grated sweet corn made for a less sweet, more savory version of the doughy local favorite. You’ll need a deep fryer and heavy-duty mixer. 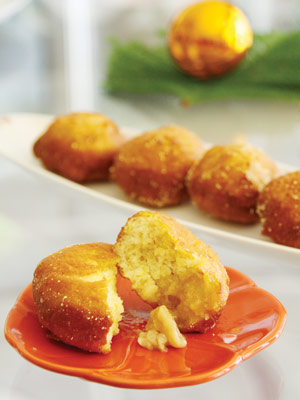 Grate the corn off the cob. The corn milk adds liquid and thickening agent to the malasada batter, and the smaller kernels prevent the dough balls from falling apart. In the mixer, combine the sugar, butter and salt with 1 egg and process on medium with a dough hook for 1 minute. Add 5 cups of flour, cornmeal, grated corn and yeast, and beat for 1 minute. Add warm water (99° is best), evaporated milk and vanilla and beat until well blended. Stir in remaining 2 eggs and ½ cup flour, and beat until dough is smooth, soft and a little sticky (about 10 minutes). Scrape down sides of bowl. Cover the bowl with a clean towel, then plastic wrap. Let dough rise in a warm area until doubled in size, about 2 hours.

Punch down dough and cut into 2 equal pieces. On a lightly floured surface, roll out each piece into a rectangle of desired thickness. (Chef rolled his ½” thick.) Cut into 2” squares and place in refrigerator to set. This preparation can be done ahead of time.

Just prior to serving, fill a medium saucepan with oil about 2” deep and heat to 350°. In small batches, add dough squares and fry till golden brown on both sides, flipping only once. Remove with a slotted spoon and drain on paper towels. Let stand about 5 minutes so that interior dough finishes cooking and guests don’t burn their mouths. Serve with honey butter.

Combine ingredients in a heavy-duty mixer, using the paddle attachment. Mix at low speed, then gradually increase speed and mix for another 10 seconds.

The corn malasadas were a fantastic midafternoon pick-me-up for our volunteer sous chefs, but there was still plenty of work to be done. Next up was Chef Isaac’s “unfried” rice. As with the duck, this dish was inspired by his mentor, Ming Tsai. 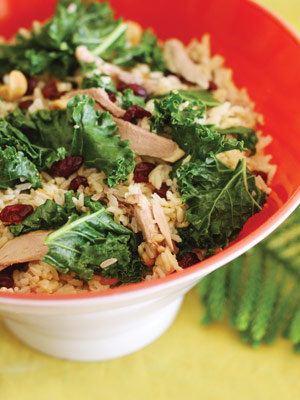 Cook the rice in water 20 minutes, then spread on a cookie sheet to cool. Rice should appear slightly overcooked. While rice is still slightly warm, drain any excess water and season with salt and pepper. Cut kale into ½” pieces and blanch in salted water. Reserve. Add cooked rice to a large mixing bowl and combine with shredded meat, mac nuts, Craisins, and kale. Season again to taste.

For our feast’s finale, Chef made a delicious and surprisingly light panna cotta with fresh pomegranate and Maui Gold pineapple. The custard and fruit toppings can be prepared the day before, and assembled just prior to serving. 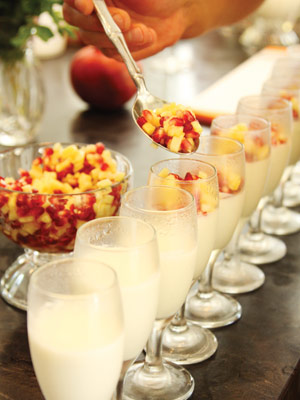 Pour the cream into a saucepan. Halve the vanilla bean lengthwise, scrape out all the seeds with a knife, then add seeds and pod to the saucepan. Add 1 cup sugar and bring to a simmer over medium-low heat, stirring occasionally. Discard the vanilla pod.

In a bowl, sprinkle the gelatin over the milk and let stand until the gelatin softens, about 5 minutes. Stir the gelatin mixture into the hot cream and mix until dissolved, then stir in yogurt. Divide among 12 four-ounce vessels, cover with plastic wrap and refrigerate until set (about 6 hours).

TIP:  To remove pomegranate seeds without a juicy mess, cut into the fruit, then hold it under water in a large bowl as you pull the seeds from the membrane.

We hope you’ll try these dishes for an exotic and exquisite holiday meal. But I caution you — once you’ve mastered the method for preparing Peking duck, unfried rice, and panna cotta, you may never go back to turkey, mashed potatoes and pumpkin pie again.

Here’s to the New Year! May it bring many new flavors on your table!