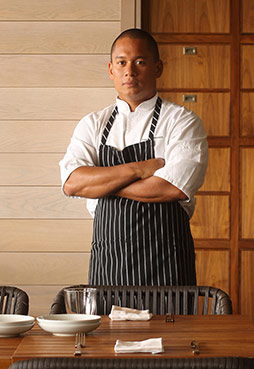 Isaac Bancaco stands in the midst of a maelstrom: dinner orders flying through Ka‘ana Kitchen, the sleek new restaurant in the heart of Andaz Maui at Wailea. Cool and collected, as if conducting Mozart’s Piano Sonata in C, the young chef de cuisine directs his staff: “Fire the risotto. Two strawberry salads . . .” then turns to a counter covered with plated appetizers and entrees. Every dish receives Bancaco’s vigilant inspection. He adds finishing touches of delicate baby herbs and edible flowers, then nods his approval to the servers standing by. And he does so with not a drop of sweat on his brow.

After graduating from O‘ahu’s Kamehameha Schools in 1999, Maui-born Bancaco enrolled in the Western Culinary Institute in Portland, Oregon. Two years later, he applied for an internship in Wellesley, Massachusetts, at Blue Ginger, the East/West restaurant launched by Chef Ming Tsai of TV’s Food Network fame. Under Tsai’s mentorship, Bancaco honed his culinary prowess and professionalism, working his way up to sous chef and learning “to prepare good food, to strive for success in business management, and to interact with people on all levels.” A capstone of his four years at Blue Ginger was assisting Tsai in a first-ever win against Bobby Flay during an Iron Chef America cook-off. 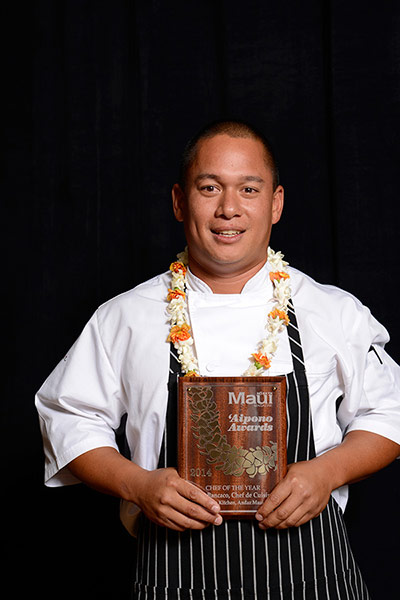 Andaz Maui opened in 2013, with Bancaco as chef de cuisine of Ka‘ana Kitchen. Here, he continues to grow a repertoire of unique-to-Maui dishes. One example: kampachi-smoked “bacon” on creamy risotto, topped with abalone-like sauteed ali‘i mushrooms and a velvety sweet poached egg.

Andaz Executive Chef Brent Martin commends Bancaco’s innovative use of local produce and sustainable seafood, and also his support of food-driven charity events. “Isaac is the new-generation Hawaiian chef,” says Martin, “the poster child of a revolution of chefs [who are] working closely with the Maui Tourism Board to promote Maui as a cultural destination that is driven by food.”

What His Peers Say…

“Isaac Bancaco never stops striving to improve; he is also passionate about the use of local ingredients.”

“Isaac is a talented chef with an appreciation for local products. [He] gives a true taste of Hawai‘i to our guests visiting Maui.”

“Isaac is a great supporter of our culinary community. He has created a very innovative menu at Ka‘ana Kitchen. Through hard work, he came up through the ranks and is a perfect role model for local young chefs entering the culinary field.”