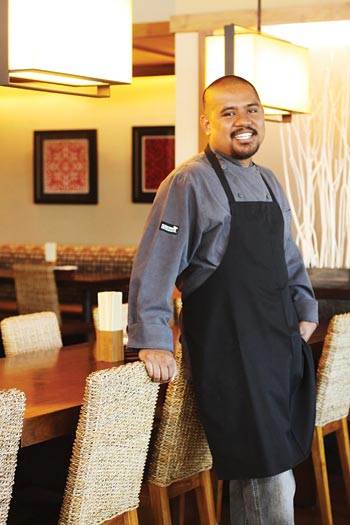 Nine years ago, Sheldon Simeon was visiting his girlfriend (now wife) on Maui. Raised on the Big Island, the recent culinary-school grad had attended Maui Community College for a time, and said he’d move back here if he could get a job. A week later he was Aloha Mixed Plate’s new prep cook. He paid his dues as grill guy, expediter, and sous chef before accepting a plum assignment: lead chef at the brand-new Star Noodle.

His bosses sent him and a few colleagues on a spy mission to slurp soup at New York City’s best noodle houses. Back in the Star kitchen, they crafted a simple, flavor-packed menu of locally inspired dishes with urban flair.

Star Noodle was an instant hit. Getting not one but two James Beard nominations is every chef’s dream, but Simeon hasn’t let it spoil his humility. At the recent World of Flavors Conference in California, Simeon found himself face to face with real culinary giants: a thirteenth-generation soba maker and Iron Chef Masaharu Morimoto. (Simeon proudly brandishes a knife signed by Morimoto-san.) He was most inspired by a chef who surrendered his 200-year-old dashi recipe when university research revealed a new way to get maximum umami (savoriness) from kombu (seaweed). “The Japanese have tradition, but they don’t shy away if something’s better,” Simeon says. “Sustainability is a trend now, but to them it’s a way of life.” He pauses. “Like pono [right behavior] in Hawai‘i.”

A former instructor of Simeon’s recently commented, “I hope he wins.” Well, Teach—he made the grade.

What his peers say:

“His food is culturally significant [with] a contemporary approach.”

“Local boy from Maui Community College running one of the most progressive, urban-feeling restaurants on Maui.”

Congratulations to our 2011 Chef of the Year!