Maui is a refuge and a reward, a red-carpet-ready celebrity, and a shy tendril of fern uncurling in the sun. Its landscape runs the gamut from thunderous walls of water bearing down on the North Shore to fragrant, rain-forested valleys that reveal themselves soft-bellied, with tousled hair, like a lover in the morning. A tangle of contradictions, Maui wears a Gucci heel one on foot and a puka-shell anklet on the other. It’s the Hawaiian humpback whale’s curious serenade and the machine-gun fire of raindrops on a tin roof. It’s a warrior with a long memory, a glistening treasure washed up from the sea, a whiff of plumeria as you step off the plane.

Each of us who calls Maui home—for a lifetime or a few days—has a collection of impressions that spells out our personal paradise. Sure, more traffic lights sprout up around the island every year. And some of our cherished landmarks are mere memories now. But even as Maui transforms, its allure remains. After three years of composing this lucky-we-live-Maui list, we haven’t run out of fresh material yet. Here’s our latest sampling of what makes Maui truly no ka ‘oi.

On the way to or from Kahului Airport, stop at Kite Beach, the west end of Kanaha, via Amala Place, the side road past the rental car companies. Dig your toes into the sand and watch daring waveriders perform aerial acrobatics—you can’t help but feel your spirit lift vicariously.

If the night sky seems somehow bigger or closer here, it’s no accident. Astronomers hail Haleakala as one of Earth’s top spots for staring into the sky. Each night, Mauians can be humbled by a dizzying kaleidoscope twinkling in the distance: planets, stars, comets, satellites, and other cosmic stuff. Watch Scorpio and Orion trade places as the seasons shift and search for the Southern Cross—Hawai‘i is the only spot in the U.S. where it can be seen.

Recipe for joy: a few friends, a steep, grassy hill with a view, and some sturdy cardboard slides.

When a shaft of sunlight pierces the clouds draped across West Maui’s peaks, few places can rival ‘Iao Valley’s beauty. Wander through the valley’s multicultural gardens, watch kids cannonball into the stream, take a fragrant hike in the rain, or even go for an afternoon skinny-dip in a secluded pool  upriver. No worries, the giant pina‘o (dragonfly) soaring overhead won’t tell. 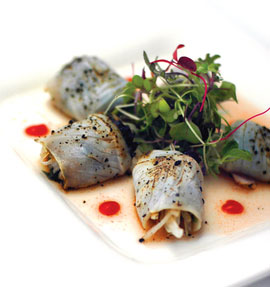 Upcountry you’ll find the prettiest bouquets of protea, bird of paradise and eucalyptus stems. On the road to Hana there’s giant torch ginger and anthuriums—a steal at just $5 a bundle. But don’t steal ‘em! Instead, plunk a few extra nickels into the honor-system bucket for the aunty or uncle who grew and cut them for you.

Which seasoning is the most ono (delicious): limu, wasabi, or shoyu? Knock yourself out trying to decide.

Thanks to the Simmers, an entrepreneurial couple on the North Shore, Maui’s many yogis now practice their sun salutations and sphinx poses in brightly colored, organic yoga pants and camisoles. Styles like “moana” and “pono” spread aloha to mainland customers. Namaste. www.innerwaves.org 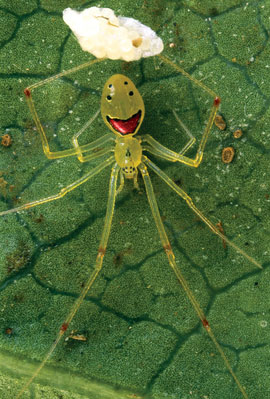 This tiny, endemic forest dweller puts its best face forward. Scientists think the rare arachnid’s markings—which vary from spider to spider—evolved as a means of disorienting hungry birds. Guess a smile will save you every time.

“Maui” sounds best when pronounced by a native Hawaiian speaker. The middle vowels are drawn out deep and low, the sound rising from the belly, the piko, or navel. Composed mostly of such resonant vowels, Hawai‘i’s native tongue is punctuated by percussive pauses, populated with words that are layered poems in and of themselves, and woven into proverbs such as the state’s motto: “Ua mau ka ea i ka  ‘aina o ka pono. The life of the land is perpetuated through righteousness.” That  righteousness is contained and nurtured in its language.

Maui might not have world-class art museums, but anyone can peruse for free the million-dollar collections at various island resorts. Discover original works by Picasso, Warhol, Botero and many more at the Grand Wailea Resort & Spa, and check out the exhibit of Hawai‘i-based modern artists at the Four Seasons Resort Wailea. Big-city sophistication without the subways.

For more than thirty years, the skilled artisans of this collective have turned out flawless wooden bowls, imaginative ceramics, stained glass, prints, and paintings—any of which make coveted anniversary or graduation gifts. Visit the Guild’s new home at 69 Hana Highway in Pa‘ia.

This October, Maui County will celebrate the canonization of its very own saint—the Belgian priest who came to Hawai‘i in 1863 and worked tirelessly for the benefit of those suffering from Hansen’s disease, then called leprosy. He built six chapels and homes for girls and boys, and defied Board of Health rules by ministering to those exiled to Kalaupapa on Moloka‘i. He’s credited with two miracles: the spontaneous healing of a nun in 1987 and the disappearance of a woman’s lung cancer in 1999. 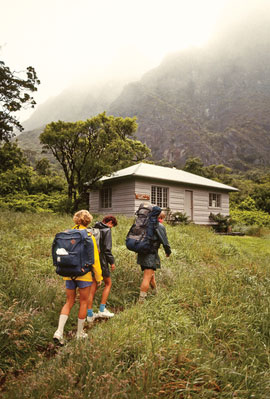 Of Haleakala National Park’s three wilderness cabins, Paliku is the jewel—nestled against the rain-washed cliffs of the crater’s most remote interior wall. Built by the Civilian Conservation Corps in 1937, the cabin’s wide bunks and cozy fireplace offer sweet shelter after a vigorous ten-mile hike. www.nps.gov/hale

A mile and a half of soft, deep sand with no buildings in sight. The water is more colors of blue than we have names for and the crankin’ shore break is a perfect platform for skimboarders’ tricks.

For the week surrounding May first, elementary and middle schools celebrate aloha with flower-decked hula and song competitions. If you don’t have kids, borrow some for the day to get free, front-row tickets to an unforgettable rendition of “Opihi Man.

Come Fourth of July weekend, all of Maui’s paniolo (cowboys) dress in their finest for a parade through Makawao town. After the parade, three days of Hawaiian-style rodeo action dominate the Oskie Rice Arena. Don’t miss this year’s bull riding, calf roping, and barrel racing heroes!

Remember when attending the rare performance that made it to Maui meant sitting on bleachers in boomy gymnasiums, or in rows of metal folding chairs where you couldn’t see the stage? Fifteen years ago, the MACC opened its doors, and now a world of art and entertainment is ours to enjoy in comfort and style. The box office? Right over here. www.mauiarts.org 242-7469

Maui’s own poet laureate lives in remote Peahi, where he restores native habitat, cultivates rare palms, and crafts the kinds of poems that have won him the Pulitzer and Tanning prizes, among many others. An author of more than fifty books of poetry, prose, and translations, this stalwart community member recently spoke at the memorial service for Hawaiian conservationist Rene Sylva.

Planted at the request of Queen Keopuolani, this sprawling, living landmark has stood watch over one hundred and sixty-six years of Lahaina history. 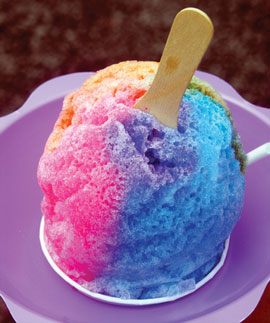 The home of manta rays, dolphins, coral colonies, multitudes of fish and a few shy sharks, this protected marine treasure offers idyllic conditions for water-sports stars and dabblers alike. Snorkelers can lazily float above the bay’s underwater metropolis, shielded from blustery trade winds. Surfers come from around the globe (and down the street) to test their wave-riding prowess and get barreled by winter’s breaks.

With ice cream and adzuki beans on the bottom!