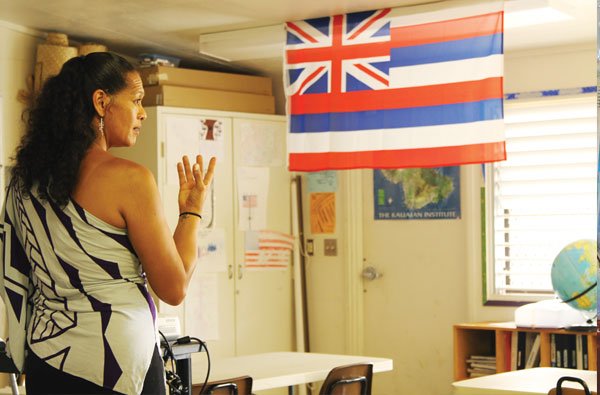 When Kapolei Ki‘ili was eleven, she bought a bumper sticker at a Hawaiian music festival. She asked someone to pronounce and translate the words for her. E ola ka ‘olelo Hawai‘i: The Hawaiian language shall live.

From that moment, Ki‘ili burned to learn ‘olelo Hawai‘i, the lyrical language of her ancestors. Years later, with a double degree from the University of Hawai‘i and a teaching certificate, she returned to Maui to offer the next generation what she had yearned for at their age: an education in Hawaiian.

It seems obvious: When in Hawai‘i, speak Hawaiian. But just thirty years ago ‘olelo Hawai‘i had few native speakers — including fewer than fifty children. When people no longer speak a language from birth, it dies. The loss is incalculable. Every language contains words that can’t be translated, ideas unique to the culture that articulated them. More than a set of words, a language is the vessel that shapes a person’s thoughts, values, and worldview. ‘Olelo Hawai‘i, the repository of over a thousand years’ worth of cultural knowledge, was on the verge of extinction. Its revival is the story of love and perseverance.

Traditionally an oral people, kanaka maoli (native Hawaiians) embraced literacy with unmatched enthusiasm when Westerners introduced it to the Islands. Missionaries developed a Hawaiian alphabet in 1822; within thirty years, nearly every Hawaiian could read and write. Hawaiians crafted laws, published newspapers, composed songs, and taught lessons — all in ‘olelo Hawai‘i.

But as Westerners monopolized political power in Hawai‘i, schools shifted to the newcomers’ language. After the 1893 overthrow of the Hawaiian monarchy, the new territorial government proclaimed English the basis of instruction. Hawaiian schoolchildren were punished for using their native tongue. Mary Kawena Pukui, revered author of the Hawaiian Dictionary, recalled being rapped on the forehead and denied holiday visits home for speaking Hawaiian in school.

In a single generation, Hawaiian all but disappeared. Despite the cultural renaissance of the 1960s and ’70s, which reawakened interest in all things maoli, ‘olelo Hawai‘i continued to languish. Many island schools reintroduced it to their curriculum — as a foreign language.

UH professors William Wilson and Kauanoe Kamana found this unacceptable. When the university asked them to establish a Hawaiian studies degree in Hilo, they made one stipulation: classes would be taught in Hawaiian, not about Hawaiian. Their program launched in 1982 — the first time ‘olelo Hawai‘i was the medium of instruction in almost 100 years.

With the birth of their first child, Wilson and Kamana’s focus shifted to early education. The couple joined other Hawaiian-speaking families to form ‘Aha Punana Leo, a nonprofit devoted to nurturing the Hawaiian language, primarily through immersion preschools. The first Punana Leo, or “language nest,” opened on Kaua‘i in 1984. There are now eleven, on five islands.

Punana Leo o Maui is housed next to Queen Ka‘ahumanu Church in Wailuku. On the grounds where the Hawaiian monarch once walked, keiki (children) learn to count and mele (sing) in her language. During field trips to nearby kalo lo‘i (taro patches) and fishponds, the youngsters put Hawaiian values into practice: he a‘o ka honua a me na mea kulohelohe (the natural environment is our classroom), and a‘o ke keiki hanau mua i kona muli (older children should teach younger children).

The preschool raises operating funds each year by hosting a Hawaiian music festival — which is where Kapolei Ki‘ili picked up her fateful bumper sticker. Her story came full circle when she became an immersion kindergarten teacher at Pa‘ia Elementary.

Determined to continue their children’s fluency in Hawaiian beyond preschool, ‘Aha Punana Leo founders lobbied to reinstate Hawaiian-medium education through twelfth grade. The resulting program, Kula Kaiapuni, operates as a school within a school on twenty-one campuses, including four on Maui: Pa‘ia Elementary, Princess Nahi‘ena‘ena Elementary in Lahaina, Kalama Intermediate in Makawao, and King Kekaulike High School in Pukalani.

Pa‘ia Elementary is a stately campus, with architecture dating back 105 years and a large, grassy playground sheltered by monkeypod trees. Kula Kaiapuni pupils make up two-thirds of the student body. As a result, the entire school practices some Hawaiian protocols. Each morning, students gather at the front steps to ask permission to enter. “It’s beautiful,” says Ki‘ili, “a sea of 200 children chanting this melodic oli [chant] to their kumu [teacher].”

In the classroom, immersion students tackle the same subjects as their English-taught counterparts, but with a different perspective. “Our students aren’t just learning facts,” says Ki‘ili. “They’re learning to think in Hawaiian.” Immersion students tend to embody traditional Hawaiian values, such as respect for kupuna (elders), cooperation, humility, and environmental stewardship.

“In immersion, you get a strong sense of what you are supposed to do,” says Kaimana Brummel, one of Maui’s first immersion students, now executive director for the Hawaiian Canoe Club. “You clean up after a party, for example. You don’t wait to be asked. It’s very different than what I see in Western culture. . . .

“We were always called upon to lead chants and dances. We became cultural leaders at a young age.” Plus, laughs Brummel, ‘olelo Hawai‘i proved handy in dodge-ball matches with other kids. “We could strategize in Hawaiian and they couldn’t understand us.”

So many parents want to enroll their children in the immersion track at Pa‘ia Elementary that they’ve held demonstrations for expansion of the program. Hawaiian ancestry is not required for admission, but preference is given to children from families that speak Hawaiian at home.

After five years at Pa‘ia, Ki‘ili transferred to King Kekaulike, where she teaches teens — her favorite. “Because the students have command of the language, we can really dive into curriculum,” she says.

Plastered across her classroom walls are giant maps of the island’s ahupua‘a, traditional land divisions that guided natural-resource management in ancient times. The Hawaiian moon calendar decorates the ceiling, complete with instructions on which lunar phases are best for planting, harvesting, fishing, or mending nets. On the shelves: nineteenth-century Hawaiian-language newspapers, Hawaiian folklore compiled by Abraham Fornander in 1916, and books by Mary Kawena Pukui, redeemed at last. Her Hawaiian Dictionary and ‘Olelo No‘eau (book of proverbs) are now curriculum standards.

Though it honors the past, the immersion program is by no means backwards looking. As eagerly as yesterday’s Hawaiians took up pens and printing presses, today’s kanaka maoli make modern technology their own. In the 1990s, before the Internet became ubiquitous in classrooms, Kula Kaiapuni students chatted with kumu on other islands via computer bulletin boards. Educators televised lessons for students to watch at home, and the University of Hawai‘i partnered with Apple to develop Hawaiian-specific software.

Conversational Hawaiian is so useful that UH Professor Puakea Nogelmeier believes it should be a job qualification for everyone from island landscapers to CEOs. “For Hawaiians, it’s often a visceral connection to ancestry; for others, it adds grounding to this place.”

Despite its value, Hawaiian education has travelled a rocky road. First, the nineteenth-century law mandating English instruction had to be overturned — a process that took several years. Then there was the matter of teachers. Most speakers proficient in Hawaiian were kupuna sixty and older, unlikely to return to college for certification. Younger, credentialed teachers weren’t fluent. And textbooks didn’t exist; teachers and parents had to create their own materials.

The biggest hurdle was bureaucracy. When Punana Leo began in 1984, no precedent existed for incorporating a second language as a medium of instruction in the U.S. public school system. Each year, parents had to petition for its continuation. Finally, in 1991, the Board of Education approved Kula Kaiapuni through grade twelve.

Today the Hawaiian-immersion movement encompasses post-graduate education, online courses and broadcast media. Its teachers have become models for indigenous-language education across the nation.

High school graduations are always lavish affairs in Hawai‘i, but none rival those celebrating the Hawaiian immersion students. Loretta Borden flew from Moloka‘i to watch her granddaughter graduate from Kula Kaiapuni in May. This year’s Maui cohort had only three seniors, but that didn’t stop the Hawaiian-speaking community from coming out to honor them.

Rain poured down outside the King Kekaulike school gymnasium. Inside, tears streamed down the faces of friends and family as elementary students presented ho‘okupu (ceremonial gifts) to their older classmates, who shyly took the stage. Barefoot, dressed in white, the graduates danced hula and offered reflections in Hawaiian before their teachers adorned them in kihei (capes) representing their class and school.

The gym’s atmosphere turned downright reverent when the students began reciting the genealogy of Kekaulike, the eighteenth-century ali‘i (chief) for whom their campus is named. It’s a long chant, quadruple the length of a Shakespearean sonnet. The teens evoked the king’s ancestors, starting with the gods Wakea and Papa. As the island’s history came palpably to life, the students revealed their place within it — as torchbearers of their language and culture.

For Borden, who had been denied Hawaiian as a child, witnessing her granddaughter chant their mo‘okuauhau, family history, was an experience beyond words. 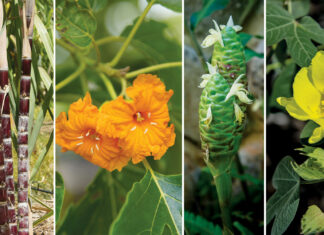 The culture of ancient Hawaiʻi was deeply rooted in nature. It still is—thanks to places like Maui Nui Botanical Gardens.