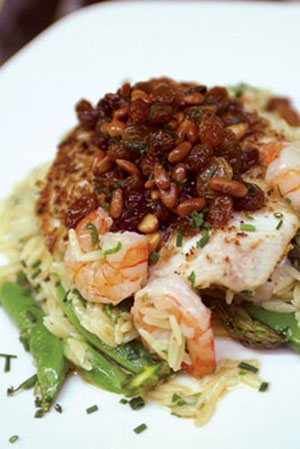 As I gushed about the fried oysters at a certain new restaurant, my doctor inched the scale upward. “Hmm,” she said ominously. “Let’s watch your cholesterol intake.” Gulp. I needed a strategy quick, before my food-writing career fattened more than my wallet. I soon discovered vitamin-packed menus all over the island, most of them foreign-flagged. Dust off your passport; we’re touring Maui’s international circuit to find gourmet meals that fit our bill of health.

The Mediterranean Sea laps up to Maui shores at the Plantation House Restaurant (2000 Plantation Club Dr., Kapalua 669-6299), where Chef Alex Stanislaw makes generous use of ancient wisdom. For over 5,000 years, cooks have depended on olive oil, one of the culinary wonders of the world. Overflowing with antioxidants, its cancer-fighting and cardiovascular benefits are well documented. Chef Stanislaw’s sashimi drizzled in lemon olive oil atop arugula and sides of asparagus, snap peas, and spinach sautéed in olive oil make getting your daily dose of good oils a delicious prospect. Choose from an array of Mediterranean-inspired fish preparations, any of which can be transformed into a vegetarian dish upon request. (This is standard at many fine restaurants, though few advertise it.) My favorite is the pan-roasted onaga (ruby snapper) served on a light stew of shrimp, green beans, and baby fava beans in a pine-nut sauce.

A line out the door and family-style seating add to the jovial atmosphere of tiny Café Des Amis (42 Baldwin Ave., Pa‘ia 579-6323). The food here has to be fresh, given the pint-sized kitchen. The crépe-based menu is simple, but good ingredients don’t need much to make them outstanding. Spinach and feta crépes are served with wild greens and a dollop of sour cream. Lightly spiced curries come with chutney and raita, traditional Indian yogurt sauce. Go easy on the chutney, but eat all the raita you want—the low-fat yogurt is calcium-rich and provides beneficial live cultures. Try the appetizer plate with hummus (a garbanzo bean spread high in protein, fiber, and iron) and dolmas (Greek grape leaves stuffed with rice).

Since we’re speaking Greek, take a seat at Vasi’s Cafe & Bakery (810 Kokomo Rd., Ha‘iku 575-9588). This Ha‘iku outpost built its reputation with a popular bakery and catering business; now there’s a sit-down menu that won’t burst your belt or your wallet. Skip the cheesy casseroles and butter-laden moussaka (traditional eggplant dish), opting instead for a delicious gyro, a warm fresh pita loaded with lean slices of grilled lamb, beef, and tzatziki, the garlicky Greek version of raita. Like all meats, lamb is high in saturated fat and should be consumed moderately. But it’s also a solid source of protein, high in zinc (boosts the immune system) and B vitamins (depression fighters). Try it in souvlaki, grilled on skewers with vegetables.

The care that goes into the preparation of meals is evident at Thailand Cuisine (1819 S. Kihei Rd., Kihei 875-0839; 70 East Ka‘ahumanu Ave., Kahului 873-0225), where matching blue porcelain and glittering Buddhist shrines set the stage for a nearly ceremonial meal. Lift the lid from a bowl of tom kha gai, chicken coconut soup, and inhale. The scent of lemongrass (a celebrated stress-reliever), mingles with kaffir lime and galangal (a ginger-like cancer fighter). Coconut milk, the base for most Thai curries, has long been maligned in the West for its high saturated-fat content, while its substantial antiviral and antifungal properties have been ignored. Enjoy this creamy remedy in tasty shrimp or tofu curries. Also try green papaya salad, a traditional Thai treat packed with flavor and papain (a powerful digestive enzyme).

Apparently, no one told the Thai or Vietnamese chefs that medicine is supposed to taste bad. Rich and soothing Vietnamese pho has forever supplanted America’s proverbial cold cure, chicken noodle soup, in my mind. At the slightest tickle in my throat, I race to Ba-Le (270 Dairy Rd., Kahului 877-2440; 1221 Honoapi‘ilani Hwy., Lahaina, 661-5566) for a bowl of pho to go. The magical broth is made from beef bone marrow simmered for hours with ginger, onions, star anise, and cinnamon. Slices of rare beef and rice noodles and submerged in near-boiling broth. Toss in handfuls of fresh basil, chili, bean sprouts, and ngo gai (saw-leaf herb, known for relieving gastro-intestinal problems), and pho is sure to cure whatever ails you.

Thanks in part to a diet of fresh fish, sea vegetables, and whole grains such as soba (buckwheat noodles), the Japanese live longer and healthier than everybody else. Their cooking may be the world’s most nutritious—if you choose carefully. Sorry, plate-lunch diehards—I’m afraid fried chicken katsu is out.

Anyone craving authentic Japanese fare can do no better than to belly up to the sushi bar at Hirohachi (1881 South Kihei Rd., Kihei 875-7474), though the line stretching 20-deep outside is actually for its famous neighbor, Sansei. Speaking of bellies, a sign above Chef Hiro’s bar announces, “Yes, we have toro!” The fatty belly of blue-fin tuna, toro derives its prized buttery texture from a triple dose of omega-3 fatty acids, the good kind of fat. Also on the menu are Big Island farm-raised abalone and nearly translucent slivers of tai (snapper) served with a pinch of ginger and shiso (beefsteak plant, a leafy source of omega-3s). For seafood choices that are good for you and the environment, check out www.blueocean.org/seafood. Whatever you order, don’t drench it in soy sauce—it skyrockets the salt content of your meal, and it’s a slight against the quality of the fish.

A discussion on Japanese health food wouldn’t be complete without a mention of natto (fermented soy beans). To some, the gooey mass of slightly sour soy beans is downright offensive; others love the stuff. Natto eaters enjoy health benefits aplenty; its unique enzymes prevent strokes, strengthen bones, moisturize the skin from the inside out, and inhibit aging and dementia. Go ahead, try it. Reward yourself with three scoops of Chef Hiro’s fresh ice cream: ginger, strawberry, or black sesame.

Finally, we consult the world’s experts on longevity. The Okinawans, who dance past their nineties, eat with an understanding of food’s medicinal or healing power, and embrace hara hachi bu, the practice of stopping when 80 percent full. By adding a similar consciousness to our dining adventures, we might just add years to our life—without subtracting any of the enjoyment. And when we can’t resist that deep-fried temptation, a little exercise never hurt anyone.

From the Chef’s Toolbox

No, it’s not a washing machine; it’s a tandoor oven—one of the few of its kind in the state. At Lahaina’s newest oceanfront restaurant, Blu, Chef Maka Kwon bravely lays dough on the sides of this fiery furnace, which can top 800 degrees Fahrenheit. (He has the scars to prove it.) Soon after, delicious naan bread and spicy, crisp chicken are delivered to your table. For dessert, what else? S’mores ala tandoor: homemade amaranth crackers topped with roasted marshmallows.