The ’49 Fleetline rumbles into the parking lot just after dusk, a few minutes ahead of the others.

Its big engine delivering short kicks of acceleration, the streamlined Chevy backs up to the curb outside Kïhei’s Round Table Pizza and drums to a stop.

At length the doors swing open. Ken and Patty Ventura step out and open the trunk. Before the event coordinators can set up their canvas folding chairs, other members of the Maui Classic Cruisers club start arriving for the Saturday night rally.

In a ritual reenacted hundreds of times since 1977, the Cruisers thunder single file into the parking lot. Throbbing with barely restrained power, each car bucks noisily into its space and stops. Soon the lot gleams with early arrivals: a maroon 1960 El Camino, a jet-black ’55 Chevy Nomad wagon, a 1929 Ford five-window coupe, a blue targa ’72 Corvette Stingray, and a red ’68 Camaro, license plate “3 qt low.”

Once or twice each month, the Maui Classic Cruisers gather at appointed destinations to let their exquisitely restored autos dazzle passersby. The members, generally Baby Boomers and older, kick back in folding chairs nearby to swap yarns and answer questions.

As befits a Maui group, the Cruisers welcome a wide cross-section of auto aficionados. At the entry level are members who own a single vintage auto. Then there are owners of two or more vehicles; owners who actually work on their cars; and at the graduate level, owners who work on other people’s cars.

And then there is club president Ken Ventura, owner of the ’49 Fleetline and several other street rods. He can assemble a car from parts. Nodding toward the Fleetline, Ventura says, “I bought this car for $500, because it was all in boxes and jars on the Mainland. It took me three-and-a-half years to build it.” Half-grinning, he adds, “Anybody can take a car apart. Putting one together is something else.”

As a kinsman to two of Maui’s pioneering car people—brothers Herman and Valentine Calasa—Ventura has been around automobiles all his life. And like other Classic Cruisers, he has owned more than his share. His present fleet includes a 1936 Willys pickup truck, a ’59 Corvette, a ’63 Corvair Manza coupe, and a 1951 Henry J Kaiser, a former race car he bought for $75 back in the day.

Cruisers who lack Ventura’s build-it-yourself savvy may have to pay more for their rides. Fred Perkins, the owner of the “3 qt. low” ’68 Camaro, recalls, “I bought it for fifty-five hundred, and then I put fifteen thousand into it. Ten people helped me work on this car.”

A big part of the cost of restoring a car, he says, is shipping specialized parts from the Mainland. Gasoline prices have also skyrocketed, and a multicoat custom paint job can run $15,000 or more. But even after pouring years of work and a fortune in cash into a car, there’s no guarantee the owner will be able to keep it.

“My first Camaro was a lacquer-black four-speed 327,” Perkins recalls wistfully. “But my daughter came to me one day and said, ‘Daddy, I want to go to college next year.’ So I sold the car. I said ‘Here: go to college.’”

Adds veteran auto restorer Clifford Figueroa, “You might live with a car for years, and you’re always tinkering with it, so it can be very hard to let one go.” For tonight’s rally, Figueroa drives a 1929 Model A Ford coupe with hot yellow flames licking its jet-black chassis. But his thoughts turn back to a former love—a ’61 Corvette he owned in a previous life.

“I had to sell that car,” he recalls sadly.

“How did you feel, seeing it out on the road when it wasn’t yours any more?” he is asked.

“Oh, I didn’t have to see it. The same day I let it go, the guy who bought it from me hit a semi and totalled the car. He told me later he got too excited driving home. He ran a red light.”

“Oh yeah. The car was totalled, but he walked away.”

One Cruiser unlikely to have that problem is Benjamin “Bully” Joaquin. The husky mechanic and cabinet maker spent thirteen years converting a 1943 Dodge Army weapons carrier into a glossy black dump truck with a custom-built koa-wood tool box. “I just wanted something different,” he shrugs.

After its wartime service, the Dodge started its civilian life fitted out with stakes for cattle-hauling in Makawao. When Joaquin bought it, he tore out the stakes, made new bumpers, and torched a couple of feet off the bed, but the truck still weighs 4,000 pounds.

“How do you get this rig up the hill?” I wonder. “Can it even do the speed limit?”

Joaquin’s chuckle suggests reaching the speed limit is not the problem. “That’s a punched-out Chevy 402 under there,” he says. “Once in a while I crack it going up the hill, but not often. I don’t want to get a ticket.”

In chats with other Cruisers, I discern a pattern. Asked about a given vehicle, the owner will recite year, make and model, then invariably add the size and manufacturer of the engine. It is soon clear that few of Maui’s estimated 200 restored autos have their original lead-burning power plants.

Fewer still wear their original paint. Instead, most restorers take advantage of high-tech processes and finishes developed for today’s market. Of the dozens of dazzling cars and trucks I viewed at Round Table and two subsequent Cruiser gatherings, the classiest paint job ennobled a ’57 Chevy hardtop owned by Keith Maeda.

Called “Bad 57,” the car boasted a black base coat overlaid with six clear coats of “violet pearl,” a tint that didn’t exist in 1957. Each clear coat was rubbed out before the next was applied. The result: a metal-flake purple so dark and mysterious it might have come from Jupiter. 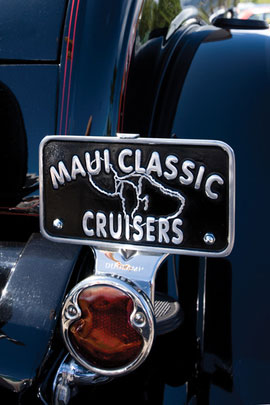 Strolling among the Maui Classic Cruisers at any given rally, you sense a whimsical nostalgia for earlier eras, most notably high school. Pausing near a gigantic, mocha-colored 1959 Cadillac, I notice wiring attached to the twin exhausts. “Those are called flame throwers,” grins the caddy’s owner, Jim Boulton. “They ignite the exhaust into a blue flame. When I was in high school in Oregon, we all had ‘em on old Fords and Mercurys, anything with a big V-8 engine.”

“There were two or three of these in every high school parking lot when I was growing up in Temple City,” recalls Howlett. “I’m guessing there might be a dozen here on Maui.”

It gets you thinking. The Maui Classic Cruisers have already spun off a Corvette Club and a Mustang Club. In these dire economic times, why not a Woody Club?

“You could live in one,” Howlett suggests.