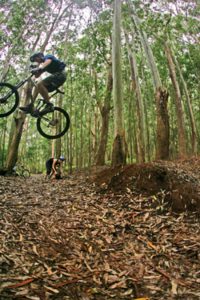 I’m no extreme sports enthusiast. When I visit the great outdoors, I tend to stroll. I like to look at the plants and pretend to know their Latin names. I might freeze midstep, awestruck by a peculiar insect. So the wild thrill of mountain biking took me completely by surprise—why stroll when you can fly through  a Makawao forest?

It was while volunteering with Na Ala Hele, the trail-building division of the Department of Land and Natural Resources, that I first considered trading my hiking boots for wheels. The Kahakapao Loop trail through Makawao State Forest is so brand spanking new that parts of it are still under construction, and I wanted to be a part of the effort.

My sister had been itching to go on a hike, so I invited her along.

At the trailhead, she eyed the shovels suspiciously. “What are those for?” she asked. “I thought this was a hike.” I feigned innocence. Hey—what are big sisters for? Tools in hand, we followed Mark Peyton, the Na Ala Hele coordinator, beneath a canopy of eucalyptus and tropical ash to an overgrown, stumpy bit of gulch. The future trail was hidden in there somewhere, and it was our job to unearth it.

We spent several hours carving switchbacks into the side of the gulch with a tool shaped like a giant spork, called a “McCloud firefighter.” Half-claw, half-scooper, it moved piles of rocky earth efficiently. We were instructed to level the dirt evenly, at a moderate grade suitable for the bikers, hikers, and horseback riders who would soon be tromping across our handiwork. As the rough hillside slowly took the shape of a path, my sister commented, “I never thought about how trails were made before.” Peyton laughed.
“Well, they aren’t made by trail fairies.”

Na Ala Hele employs a few workers, such as Peyton, but much of the trail construction is done by volunteers. Kahakapao Loop is the newest, one of Maui’s only all-purpose trails. Peyton said it’s been exciting to work on; it’s the first trail he’s been able to build from scratch during his tenure. Mountain bikers and equestrians even got to lend their two cents on the trail’s design. I graded the slope with my McCloud and imagined what the forest colors would look like to someone zipping through on a bike. 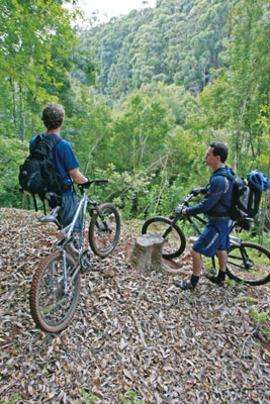 The forest’s carpet of fallen leaves looks downright autumnal—something we aren’t used to here in the tropics. The trail threads through non-native, deciduous trees planted by turn-of-the-century foresters. Remnants of native forest still remain—mostly clinging to the steep sides of gulches where wild cattle and goats can’t reach them. ‘Ie‘ie vines twist upwards in flower, and ‘oh‘ia tree here and there suggest what might have covered this land long ago. Tall, spindly halapepe trees dangle pom-pom tufts of foliage and bright yellow berries over the gulch. Ancient Hawaiians considered the tree sacred to Laka, the hula goddess. This is one of the few places on the island where it can be easily seen.

After lunch, we hiked down the completed sections of the trail. An opening in the canopy revealed a deep gulch full of koa. I was excited to hear that the native Hyposmocoma molluscivora, one of the world’s only carnivorous caterpillar species, was discovered in this very forest. (For those interested, mulloscivora means “snail eater.” The caterpillar feeds on native snails also inhabiting this forest.) Through the gap, the edge of the West Maui Mountains and Kahakuloa Head were visible in the distance. A local Boy Scout troop plans to earn some badges by building a bench here—a perfect picnic spot. As we loaded up our tools and left, a young Na Ala Hele staffer said, “I want my grandchildren to come here and say, ‘My grandpa built this trail.’”

I appreciated the sentiment, but wasn’t about to wait for my own grandchildren; I wanted to enjoy the fruits of my labor right away, while I still had a youthful advantage. Before surrendering to a life of contemplative strolling, I wanted to give mountain biking a try. I made plans to meet up with some athletic friends and headed over to Island Biker in Kahului to get a bike.

The following Sunday, two Kahakapao regulars met us by the gate at the top of Waiahiwi Road. Typical gearheads, they pointed out the flashy extras on their bikes—advanced suspension designs, Fox shocks, and fat tires. Luckily, my “Rockhopper” met the muster. I was surprised to see Ken Malott, a local physician with a busy medical practice. While I laced up my shoes and strapped on my helmet, he described how, after work, he loads his bike into his truck. Within an hour, he’s surrounded by trees, mist, and mud. He said he’s grateful for the escape Makawao Forest provides. Heaving our bikes over the gate, we ascended the steep cement road leading up to the trail.

Unused to physical exertion, I was soon huffing and puffing. I gained a serious appreciation for Na Ala Hele crew as I pedaled into the forest. Without those carefully carved switchbacks, the uphill stretches were mean! 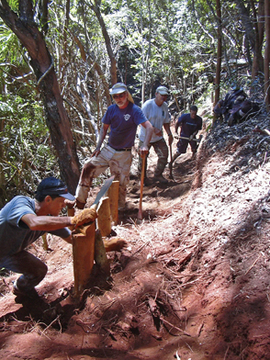 Climbing the trail’s steep eastern side, I dodged patches of gorse, a nasty, thorn-riddled shrub from Scotland that has unfortunately found its way into the Makawao forest. Its two-inch-long thorns warned me not to stray from the trail.  Stopping often to rest, I caught sight of native plants I’d missed earlier: pukiawe, whose slender, pine-like branches resemble gorse when viewed at high speed, and native sedges sprouting up through the leaf litter. Bunches of maile—another sacred hula plant—rose along the path like green waves frozen in time.

As for downhill—it’s a good thing they checked my brakes before I left the bike shop. My tires skidded across slippery, wet eucalyptus leaves and swooshed through mud puddles. Strangely heedless of my own safety, I felt a little like a carnivorous caterpillar myself. Rather than inching predictably along, I was devouring the trail. I’ll admit it: I hooted. I let out a holler of joy—the adrenaline made me do it. I’ve come to the conclusion that special endorphins are released only by the action of maniacally pedaling a bike uphill. Freed by the heroic efforts of my back thigh muscles, the endorphins filled me with an irresistible urge to laugh out loud—and strain my muscles all the more.

Luckily, my companions didn’t mind my frequent rest stops. They used the opportunity to launch themselves into the air. Like a strange insect with wheels for wings, Robbie catapulted off a sharp bump in the trail. He was soon covered in mud and grinning ear to ear.

Robbie had logged some volunteer hours himself shoveling this trail with Peyton’s crew, and he’d like to do more. Despite the efforts of Na Ala Hele, Maui has just 41 miles of state-run trails, and only two trails are open to bikers. The bikers agreed that they’d love to see more trails and more support for biking in general. Bitten by the bug, I was already thinking of when I’d like to ride next and how I could get a tricked-out bike of my own. If others find this sport as instantly addicting, Na Ala Hele might need some trail fairies just to keep up with demand.

How to get there: Take Pi‘iholo Road up 1.6 miles, turn left on Waiahiwi Road. Pass Pi‘iholo Stables, and continue upwards for 2.1 miles. Park below the gate. Follow signs to trail.

Gear up for your ride at Island Biker: Rentals ($40 daily, $140 weekly) include helmet, spare tire kits, and car racks. Choose a size that fits from a selection of new Specialized bikes. Bikes should be returned in clean condition—regardless of how mean your ride was!
415 Dairy Road, Suite C Kahului
www.islandbikermaui.com
(808) 877-7744