In one of the most famous legends of ancient Hawaiʻi, Pele, the volcano goddess, sends her youngest sister, Hiʻiaka, to rescue a mortal lover. Three moʻo (supernatural lizards) have captured Pele’s sweetheart and hold him hostage in a cave on Kauaʻi. Thus, Hiʻiaka’s mission involves a second errand: dragon slaying.

As Hiʻiaka travels island to island, she encounters many moʻo. On the windward cliffs of Molokaʻi, the young goddess and her attendant Wahineʻomaʻo come to an impassable ravine. As they ponder how to proceed, a slender plank appears. Wahineʻomaʻo starts across, but Hiʻiaka recognizes the bewitched bridge for what it is: the tongue of the man-eating moʻo Kikipua. Spanning the gorge with her magical paʻu (skirt), Hiʻiaka chases the lizard to its lair and kills it. 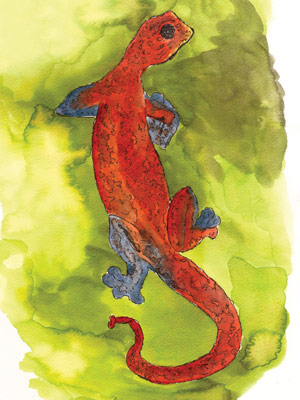 Dragons. Lizards. Deities. Whatever word used to invoke them, moʻo rank among Hawaiʻi’s most mysterious mythic creatures. They figure into the oldest Hawaiian stories and are a key to a deep, nearly forgotten magic.

Most moʻo of legend are female, shapeshifters capable of appearing as beautiful maidens or water dragons. They dwell in caves, pools, and fishponds and are fierce guardians of freshwater sources. According to nineteenth-century Hawaiian historian Samuel Kamakau, when fires were lit on altars near their homes, the moʻo would appear: twelve- to thirty-foot-long reptiles, black as night, glistening in the water. “If given a drink of awa,” he writes, “they would turn from side to side like the keel of a canoe.”