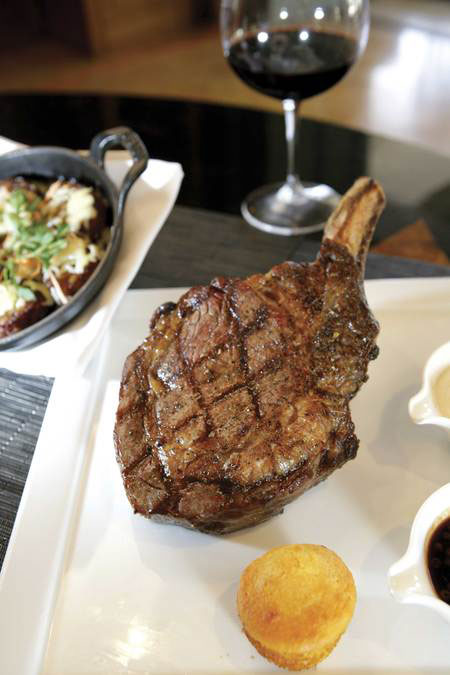 The following ode to steak is dedicated to you unabashed carnivores out there. I know I’ve ignored you. As I penned bright, bloodless paragraphs about camaraderie, sustaining the world’s seafood supply, and vegetarianism for the last several issues of this magazine, I sensed I was beginning to stray from the herd.  So . . . sharpen your incisors and raise high your steak knives: we’re stalking the island’s most drool-worthy piece of meat.

For the “Great Steakout,” I enlisted the company of my friend Michelle, a meat lover of the highest caliber. Our first stop: Duo, the newest member of the Four Seasons Wailea restaurant family. On an island that leans heavily toward the surf end of “surf and turf,” Duo opened with both barrels roaring, amidst a fanfare of carved-ice martini bars and Kobe beef “sliders” (gourmet mini-hamburgers). Christian Slater, Kate Bosworth, and Sex in the City stars John Corbett and Chris Noth were among the celebs standing in line for a taste.

A few weeks after the opening, Michelle and I took our seats by the pool, charmed by the Sambonet knives glittering at each setting. The wait staff, dressed in crisp white coats with little black buttons, look faintly overdressed for the tropical poolside clime. Yet that seems to be the intent: an orchestrated bit of pretension. It is, after all, the Four Seasons, bastion of all things celebrity. Here, even the drink menu is pedigreed. LA mixologist Kim Haasarud designed the restaurant’s chic cocktails, including a grapefruit-and-basil martini mixed with fresh herbs, and the Sommelier, an unexpectedly wonderful mix of red wine and vodka in a martini glass.

The seafood tower appetizer was less dazzling. The anonymous oysters, cocktail shrimp, and New Zealand green-lipped mussels failed to wow either of us—especially Michelle, who grew up shucking shellfish in Seattle. Before I gulp down seafood (raw oysters in particular) I want to know where and how it was harvested. And when in Hawai‘i, why import seafood from elsewhere? Never mind. We were there for the meat, which the wait staff knew considerably more about.

The famed straight-from-Japan Kobe tenderloin (at $27 per ounce!) was sold out, so I opted for the organic NY prime. Michelle ordered the chef’s recommendation, the dry-aged rib eye—twenty ounces of meat on a dinosaur-sized bone. Dry aging, an expensive and relatively rare process, requires several weeks, during which the meat’s enzymes break down tissue, naturally tenderizing the steak and concentrating its flavors. Again I would have liked to see local sources (especially now that Maui Cattle Company offers a range of superb cuts), but I was content knowing where these high-quality steaks had come from.

Unlike Hawai‘i Regional Cuisine that typically does best with fruitier, New World wines, red meat begs you to break the bank on a big red wine. Duo’s list (both bottles and by the glass) is filled with treats: lesser-known varieties and vintages from unusual locales. We chose two we had never tried: the Chateau Musar Cinsault from Lebanon, and a Spanish Tempranillo, Les Terrasses.

The Tempranillo was terrific. The Cinsault tasted like an old saddle drenched in Angostura bitters, like some potent medicine a desert gypsy might pull from his pocket. The intense flavor profile was complex, but not unpleasant. (I later read that the area’s nonstop warfare may have lent Chateau Musar’s wines their slightly metallic taste. The winery owners earned an uneasy amnesty for their grapes by hiring employees from each of the warring factions.)

The meat arrived, and its toothsome aromas drove everything else from our minds. My buttery New York was essentially flawless, and went well with the Tempranillo. Michelle’s rib eye had a nutty, sweet taste—the dry aging resulted in layered flavors reminiscent of cured meat, only succulent and tender rather than leathery.

When we drank the Lebanese wine with a mouthful of the rib eye, the top of both of our heads blew off. It was as if a powerful burst of music erupted suddenly in the air. We could see wild horses stampeding across the desert and feel the wind-blown Mediterranean crashing against the cliffs. The meat’s primal aged flavors blossomed with this wine; it was a perfect marriage.

Accompanying the steak, Chef Noel’s sauces are commendable in their simple, powerful delivery. Like single-note fragrances, the sauces capture the essence of each flavor. Green peppercorn, fresh horseradish cream, and the chef’s personal barbeque are three favorites. As delicious as they were, I used them sparingly, not wanting to distract myself from the meat.

On the side we enjoyed the “spuddies”—dollops of truffled potato drenched in cheese and baked in an iron pan. The bamboo-steamed veggies were plain, but lightly coated in butter. We ate in reverent silence. Thanks to the unobtrusive service for which the Four Seasons is renowned, glasses were refilled and empty dishes vanished. I stole greedy forkfuls of Michelle’s steak. Mine was good, but hers was a symphony.

For dessert we shared a chocolate trio that included a light mousse and a meltaway cake that promises to give the award-winning chocolate soufflé served down the road at Roy’s a run for its money.

When we hit Ruth’s Chris Steakhouse a few weeks later, I warned the manager. “We fell in love with Duo’s dry-aged steak. And we can’t stop fantasizing about this unusual wine.”

“The Lebanese Cinsault,” he said, knowing immediately. “We don’t have it. But I’m sure we can make you happy.” Christian Savage came to the Wailea Ruth’s Chris two years ago. After recreating the wine program, he immediately won Wine Spectator magazine’s award of distinction, followed by an award of excellence. This year he nailed twelve of the one hundred top-listed wines, beating his previous par of four.

We started with veal osso bucco ravioli—fabulously rich but burdened by too much salt. The shrimp spiced with Serrano chili went well with the Super Tuscan that Savage selected. After these bitefuls, we were well primed for our steaks.

Michelle ordered the T-bone. I went for the filet. Savage informed us that the meat is butchered daily; he said he had a hand-cut filet waiting just for me. All Ruth’s Chris steaks are dusted in salt and pepper, slathered in a thick pad of butter, and pan-seared.

Savage recommended the Ruffino Il Ducale 2003, which he decanted like a practiced acrobat, swinging his liquid partner between bottle and glass. We let the wine warm up. Often Maui restaurants spoil red wines by storing them behind the bar, at too high a temperature; Ruth’s Chris keeps a fifty-six-degree cellar.

As the wine’s flavors began to open, we got to comparing wines to novelists. “Some people like Dan Brown and The Da Vinci Code,” said Michelle. “He’s readable, but I want to drink Samuel Beckett.” The Four Seasons’ Lebanese wine, we agreed, was unquestionably the poet Kahlil Gibran.

When our steak arrived, the food runner politely inquired which hand Michelle holds her fork with, so he could place the bone out of her way. Maybe the name influenced me, but I tasted the wide, Midwestern plains in the T-bone. The expansive flavors grew sweeter closer to the bone. My filet was tender enough to feed a newborn—this cow didn’t wander through the sagebrush, it was fanned with sagebrush. It was cooked perfectly: bright pink all the way through. (Though in the future I’ll order it sans butter; the more subtle flavors were overwhelmed by the extra fat.)

The Ruffino (christened “Jules Verne” by Savage) continued to ripen throughout dinner, cutting through the marbling in both our steaks. On the side, we dug into asparagus and a sugar-crusted purple sweet potato dish I could easily have enjoyed as dessert.

After dinner, Savage shared an Okanagan (British Columbia) ice wine, the 2003 Mission Hill Riesling. It slid down my throat like liquid gold, its intoxicating floral hints, grapefruit, and baked Alaska lingering on my tongue—a perfect finish to a fine meal.

As for the Great Steakout? After these two superlative dinners, I doubted I could find better and threw in the napkin. The verdict: don’t bother with the extras at a steakhouse; but do treat yourself to a prime cut and wine to match. Of the four worthy contenders, it’s the aged rib eye I deem champion. Weeks later I’m still digesting its complex flavors in my mind, like lines of a well-crafted poem.