If you frequent Hawai‘i’s tree-lined beaches as much as my family does, it’s likely you’ve seen someone barefooting it down to the water, suddenly stopping, crying out and hopping on one foot. Maybe you’ve been that unlucky person who just got punctured by a kiawe thorn hidden in the retreating sandy wash or the deep sand dune. Those inch-long impalers can penetrate rubber slippers and boots, and pierce the leathery sole of even the toughest local’s foot.

Introduced here in 1828, and spread via cattle and goats’ digestive tracks, kiawe trees also produce bean pods that island ranchers used to harvest for cattle feed. I’ve always had a healthy respect for those menacing thorns, but after spending some time with Sunny Savage—an advocate for wild-plant foraging and owner of the mobile Savage Kitchen—I’ve a new admiration for the beans’ nutritious properties and tasty possibilities.

Savage says, “Prior to moving to Hawai‘i, I harvested mesquite pods in Arizona; they are in the same family as kiawe. When I arrived on Maui in 2008, I remember having my mind blown with how much kiawe grew here. I started harvesting right away, but wasn’t making much flour on my own. I was just cooking it into tea and soup stocks.” With a gentle smile, Sunny says, “It’s what I fed my son Zeb when he was a baby. I bought Waianae Gold kiawe flour and all I had to do was add water, broth or coconut milk. I felt empowered . . . here was a tried-and-true, healthy food for my son.”

She credits Vince Dodge, of Waianae Gold, for being a proponent and leader in kiawe education and flour production since 2006. “We’re lucky to have someone like him to champion the cause.” I ask Sunny whether the bean could become a major food source for people, and she replies, “It could feed an army! The yield [of flour from milled pods] is nearly 100 percent. It’s high in protein [100 grams of kiawe flour contain 8 percent of the recommended daily allowance] and minerals like magnesium and potassium.”

Knowing what to harvest is paramount, as aflatoxin, a carcinogen produced by molds like Aspergillus flavus and Aspergillus parasiticus, may be present under damp and humid conditions. Once you know what to look for in a “good bean,” it’s easy to identify. There are also labs that can test for aflatoxin levels. If you’d rather not harvest the pods yourself, you may order the flour from Waianae Gold at WaianaeGold.com or DesertHarvesters.org.

Our thanks to Sunny Savage for sharing her recipe for this kiawe cooler. 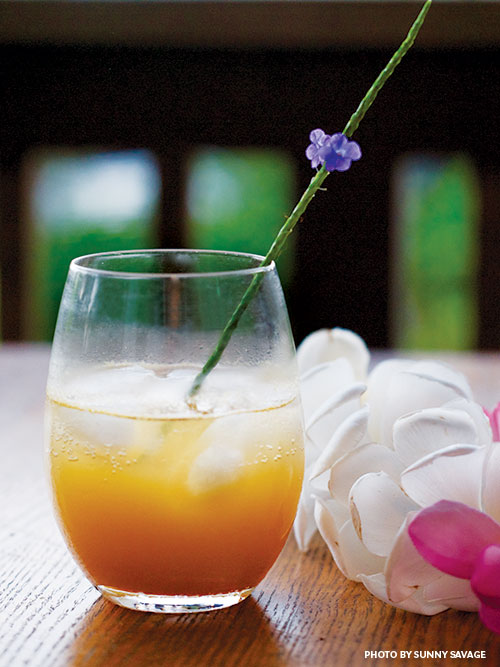 Procedure: In a bowl of water, soak pods, citrus rind, and (if using) pineapple rind overnight (roughly eight hours) in fridge. Place the mixture in a pot and cook on lowest heat setting, adding allspice and cinnamon. Do not allow liquid to boil. Simmer for an hour and a half and strain. Compost or discard solids. Add honey or coconut sugar (vegan) to taste. Cool in refrigerator before serving. Garnish with a twist of citrus rind. Enjoy!