There’s something about Lisa Raymond’s garden that makes you feel immediately at ease. Perhaps it’s because Raymond is an ethnobotanist who studies the relationships between plants and people.

Ask, and she’ll tell you that this garden has yet to display its true colors. A painter’s palette is concealed within the stems, roots and leaves of the native plants and trees that border her home in Kula.

“The early Hawaiians extracted dyes from a vast number of native plants,” Raymond says, pausing to examine the underside of a pale yellow gourd resting on her back porch—a winning entry at this year’s Maui County Fair. “Virtually every plant and tree I have here can be used to make dyes,” she says, with a hint of pride. “It’s a work in progress; now that I’m retired, I can focus on expanding my garden.”

Raymond bends down to pluck a dime-sized berry from a nearby ‘uki‘uki, a native member of the lily family. She gently swipes it across the top of her left hand, and a lustrous smudge of indigo appears. “The ‘uki‘uki berries are used to create several shades of green and blue,” she explains. “The exact shades depend on what area the plant comes from.” Growing conditions, soil quality and the age of a plant can affect its pigment. “The [Hawaiians] figured this out thousands of years ago.”

The Polynesians who settled Hawai‘i brought with them the ancient art of kapa making, pounding strips of bark and other plant materials into cloth of astonishing quality that was used for nearly every aspect of daily life, from ritual adornment to swaddling clothes for newborns. When it came to color, the Hawaiians’ use of natural dyes—extracted from roots, leaves, bark, soil, flowers and fruits—set them apart from the rest of the South Pacific.

“They really were scientists,” says Raymond. “They wanted more than just the standard brown and black dyes, so they learned how to extract color from other sources.”

The Hawaiians managed to outshine their neighbors, thanks to the diversity and abundance of plants and trees they found in these islands. “We have plant resources here that are considerably more complex than anywhere else in the Pacific.”

Hawaiians discovered dyeing techniques that could yield everything from jewel-like tones of red, purple and yellow, to the purest white and the deepest black. The softly textured ‘akala, better known as the Hawaiian raspberry, produces brilliant reds once used to adorn the ali‘i (Hawaiian royalty). Various shades of red can also be extracted from the cheerful ‘ohelo berries, sap from the inner bark of the kukui tree, and ‘alaea, the native red clay that today stains the popular “Red Dirt Shirts.”

Yellow, another color signifying royalty, is bountiful in several regions of the islands; it can be extracted from a variety of plants, including the mottled gold fruit of the holei tree, kukaenene bark, or a flush of ma‘o blossoms.

Intent on capturing the most desirable hues, Hawaiians began mixing in natural additives, such as seawater, coconut water and egg whites. The root bark of the noni tree can be used to create a tinge of golden yellow. According to Raymond, “If you add the right amount of burnt coral to the noni root, you’ll wind up with a deep red dye.”

The design elements used in kapa held great significance, reflecting the experiences of those who crafted them. Bird feathers, shark teeth and fish bones were common themes. Positive and negative space and striking geometric designs—fashioned by carving intricate lines or stamping repeated patterns with a dyeing stick—were a favored motif. “Their use of watermarks was unique to the Hawaiian people,” adds Raymond.

While there is no comparable, definitive record of the cultural significance of dyes, Raymond suspects each hue, thread, stitch and pattern held meaning, as Hawaiians believed that clothing absorbed the mana (spiritual power) of the wearer.

Certain dyes may also have distinguished one clan from another, says Raymond. “The abundance of particular dyes in a particular region would mean that the members of that clan would wear, and be identified, by those colors.”

Raymond’s own fascination with traditional dyes was inspired by a trip to the Bishop Museum in Honolulu more than ten years ago, where she encountered an exhibit of Hawaiian-dyed artifacts. The artistic beauty and delicate intricacy of the colorful fabrics piqued the curiosity of the ethnobotanist.

“When I saw the photos and exhibits of Hawaiian kapa,” she recalls, “I   couldn’t help but wonder, How did they do that?”

Raymond’s burgeoning curiosity evolved into a steadfast determination to replicate the colors of the artifacts she had seen on display. After researching and working alongside respected Hawaiian kapa makers and dyers (such as O‘ahu’s Dalani Tanahy and Moana Eiseley, and the Big Island’s Marie McDonald), she now has an extensive collection of dyes, dyed fabrics and dye sources—the plants that flourish in her backyard garden. 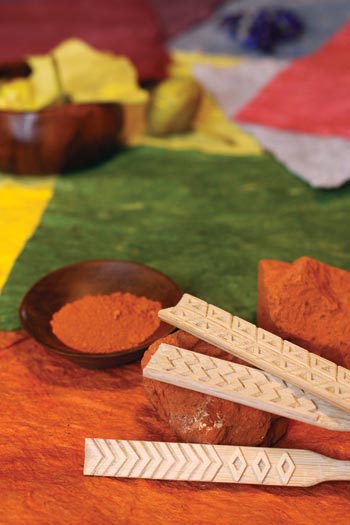 Hawaiian dye making is not for the impatient. It is complex, and painstakingly slow. The laborious process of extracting dyes from plants includes collecting the requisite materials, allowing them to steep for several days before boiling, fermenting, mixing . . . and, of course, preparing for the possibility of doing it all over again.

Raymond’s own kitchen is a testament to the arduous nature of the craft. Large metal pots filled with murky concoctions of water, plant ingredients and cloth are scattered across the kitchen countertop—a typical sight for this household, she says with a laugh. And she doesn’t use any shortcuts. Her tools include a shark-tooth knife and a shell for scraping bark into strips. Other than her kitchen stove, everything is authentic.

Perhaps the most time-consuming endeavor is generating the lifeblood of Hawaiian dyes—planting and tending to the native plants and trees with dye potential. “It’s definitely a labor of love. . . . Those who are willing to learn must be willing to take the time,” Raymond advises.

Though she has uncovered a slice of Hawai‘i’s colorful history—and is, in fact, writing a book on the subject—Raymond plans to continue experimenting with the dyeing potential of native plants and trees, in her garden and beyond. In particular, she is actively hunting for an elusive red dye she spotted in a photograph of a Hawaiian tapestry. “I’ll find it,” she vows. “I know it’s out there somewhere.”