On the day that the National Weather Service issued a tsunami warning for Hawai‘i, Pineapple Grill had a sold-out wine dinner scheduled and an additional 100 guest reservations on the books.

The restaurant closed for breakfast and lunch, but when the warning was cancelled mid-afternoon, Executive Chef Ryan Luckey pulled on his chef’s coat and scrambled to get ready for dinner. His wife joined him in the kitchen, peeling asparagus with their baby daughter Lola in a backpack. “I thought, ‘I’m having one of my chef nightmares,’” says Luckey. “But we pulled it off.”

Servers serenely poured Okanagan ice wine, courtesy of the visiting winemaker, while the kitchen baked pineapple upside-down cake for the masses. Just another day at work for this polished crew. That kind of aplomb is one reason Maui No Ka ‘Oi readers rewarded this smooth-running restaurant with not one, but three ‘Aipono Awards this year, including the coveted Restaurant of the Year for the second year running.

Credit for the restaurant’s success belongs to everyone, says Luckey, from Sous Chef Pavy Keomaniboth, who “brings a calmness to the kitchen,” to managing partner Chris Kaiwi, who is “tough, but always fair.”

Undoubtedly, it’s the creative cuisine that keeps guests coming back for more. Devout fans are so fond of Chef Luckey’s braised short ribs and pistachio-crusted ‘ahi, they’d rebel if he tried removing these dishes from the menu. The chef’s commitment to local ingredients and clear, simple flavors shows in dishes such as the warm Maui fennel, watercress and corn salad, dressed with a yuzu emulsion and topped with Alaskan crab.

The task of matching wines to the ever-evolving menu belongs to assistant general manager Sheehan McCoy. McCoy has continued to improve the cellar since opening the restaurant five years ago, packing it with well-priced gems—particularly in the pinot noir and syrah categories. His wine list contains helpful tasting notes to steer the uninitiated towards vintages they’ll enjoy. He and Kaiwi have created a calendar of compelling special promotions. Top among these is Wine Wednesday, when guests enjoy terrific bottles at half price.

Pineapple Grill is an example of all the pieces falling into place: excellent food and wine, gracious service, and inspiring views from nearly every seat. But this winning combination is no accident; it’s the result of consistent practice and improvement. “You know, it’s tough trying to get to the top,” says Kaiwi, “but it’s even tougher trying to stay at the top.”

Most of Maui’s top restaurants compete for the patronage of tourists, who dine out every night of their vacation. Dana and Michael Pastula aim for an arguably tougher market: the locals.

Since diving into the business twelve years ago, the Pastulas have opened ten restaurants—most of which the down-to-earth couple have built into booming successes, then sold. They’ve nailed a formula that works. Many restaurants promise creative, quality food at affordable prices. The Pastulas deliver—in spades.

“We have to follow through,” says Dana Pastula. “We see people over and over again. They have my cell number and they’re not coy.”

The chef/restaurateurs currently own Cafe O’Lei franchises in Kihei, Kahului, Wailuku, and Waiehu—each tweaked for its particular clientele.

At the Market Street restaurant in Wailuku, Pastula has trained her staff to serve lunch—from the moment guests are seated to the payment of their bill—within forty-five minutes. “It has to be fast,” she says. “It’s a business town.”

The atmosphere at Cafe O’Lei Kihei is festive and lively. Gauzy red curtains separate tables, giving a hint of privacy, and orchids lend class to the strip-mall address. On any night of the week, the south-side restaurant is packed; patrons mill around the hostess stand, waiting to be seated. Despite the sustained rush of customers, the wait staff is prompt and friendly.

It’s no wonder the bustling restaurant is popular. In addition to Cafe O’Lei standards, guests can order lobster and gourmet flatbreads from the brick oven or oysters from the raw bar. Smart couples bypass the line and snag seats at the sushi bar, where chef Masa Mafuni plates up dragon rolls and sashimi with lightning-quick precision.

Catering to a more laid-back crowd, the Waiehu restaurant on the municipal golf course serves many of the same items, but without the fancy flatware and folded napkins. Plate-lunch specials include the proverbial rice and macaroni salad. Also overlooking golf course greens, the Dunes at Maui Lani is a tranquil oasis just outside Kahului’s business district. In addition to lunch, guests can book birthday celebrations, retirement parties, or wedding receptions in the banquet room.

At each location, the Pastulas have their fingers on the pulse of what Maui diners want; it’s this type of customer service that makes Cafe O’Lei restaurants perennial winners.

Nestled on the cliff overhanging Napili Bay, the Sea House restaurant at the Napili Kai Beach Resort has been a treasured secret since the 1960s. Back then, it was known as the Teahouse of the Maui Moon and surfers stopped in for breakfast at this scenic spot before hitting the waves.

Fifty years later, not much has changed: hostesses still greet guests with relaxed aloha, and bartenders still pour stiff mai tais at the Whale Watcher’s bar. Crystal-clear seawater still laps gently up to the restaurant’s lanai, which boasts one of the most arresting views on the island.

On Sundays, the restaurant fills to capacity for breakfast. As the sun begins to peek over the West Maui Mountains, house-made macadamia-nut cinnamon rolls fill the dining room with an irresistible aroma. Waitresses whisk by with fluffy oven-baked pancakes topped with caramelized sugar, bananas, and local organic pineapple. POG (passion-orange-guava juice) is still on the menu, just like the old days.

Since taking the helm in the kitchen three years ago, Chef Craig Erickson has steadily introduced new elements to the menu. For dinner, the poke nachos—diced ‘ahi drizzled in Thai citrus and wasabi aioli—are a colorful start. The volcano lamb shank melts off the bone. For couples or small parties seeking something special, Erickson will prepare a private four-course dinner, served outside on the dramatic bluff.

Several members of the Sea House’s staff have grown up along with the resort, including restaurant manager Verna Biga, who started three decades ago as a cook. “It really is an ‘ohana [family] here,” says Chef Erickson. “Everybody seems committed to helping each other out.”

As the resort’s fiftieth anniversary approaches, the staff is busy preparing for a major renovation. The public will be invited to the golden celebration in November. By then, the restaurant’s entrance will have been rerouted, restoring emphasis to the spectacular view and adding prime seating along the waterfront. Once these updates are complete, this seaside gem isn’t likely to be a secret any longer. 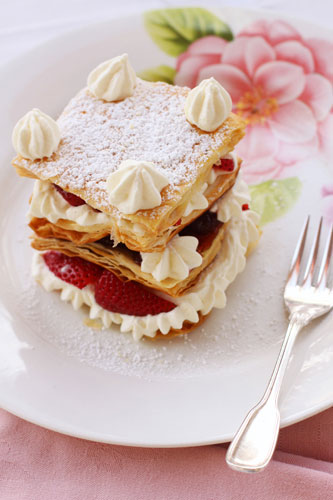 When asked to declare the island’s most romantic restaurant, Maui No Ka ‘Oi readers consistently elect small, intimate spots. This year’s silver and gold winners both have only a handful of tables inside, and a few more tucked amidst gardens—ideal environments for kindling passion. Since we recently featured the gold winner, Capische and its sister Il Teatro, we’re turning the spotlight on Gerard’s, where it’s as easy to fall in love with the food as with your partner.

Gerard Reversade left France for Hawai‘i in 1973—a plucky twenty-two-year-old who spoke no English, but managed to introduce islanders to duck confit. In the thirty-plus years he’s called Hawai‘i home, he has yet to surrender his charming accent or his zeal for fine French cuisine.

Each dish at Reversade’s Lahaina restaurant, however creative, bears the stamp of authenticity; he doesn’t stray far from tradition. This loyalty pays off handsomely in his perfect French onion soup: soft ribbons of onion are submerged in rich, house-made beef broth and blanketed by melted Gruyere and Parmesan—the browned edges of which are a sinful delight to crack off the rim of the bowl. The olive-oil-roasted snapper is served with a creamy orange-and-ginger emulsion, a testament to Reversade’s skills as a saucier.

When the chef desires to incorporate new menu items, such as gooseberries—known as poha berries in Hawai‘i—he consults his library of over 300 cookbooks and encyclopedias. According to the chef-cum-scholar, the tart fruits were popular in France in the seventeenth century. Dipped in dark chocolate, they were called “amour en cage” or “caged love.” In sharing such timeless recipes with Hawaiian diners, Reversade sets love free.

He’s among the few chefs who also bakes; his commendable puff pastry seals in a savory quail Souvaroff, and wraps around tender Hamakua mushrooms. For dessert, diners can scale the mille-feuille, a delicate pastry tower layered with lemon curd, fresh fruit, and house-made strawberry jam, or dive into fresh sorbets—chocolate and guava scoops bursting with flavor, served in a pool of rhubarb compote with an angelically light macaroon.

But the magical Grand Marnier soufflé is the real star. Guests desiring this sweet finale should order it on arrival, as it requires lengthy preparation. It’s an impossibly light, eggy affair that doesn’t collapse, but stays true to the last reluctant bite—just like a great love.