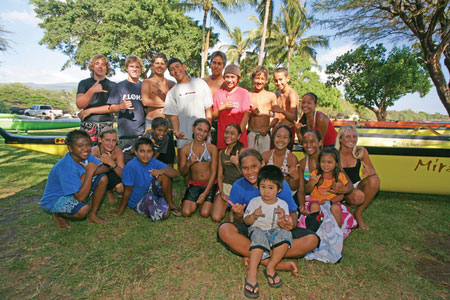 I moved to Hawai‘i when I was 13 years old, and my life has never been the same. But it wasn’t just the lush green growth of Hilo’s jungle or the fascinating world hidden beneath the cool waters along Keaukaha’s rocky shore that introduced me to a new way of being.

It was the people. Families in humble homes who fed wandering flocks of kids and included me without hesitation. New friends who took me camping at the beach, invited me to sing along as they casually picked up an ukulele to strum mesmerizing melodies, indulgently accepting me and all my awkward haole ways.

What changed my consciousness and redirected my future was that warm, friendly, down-to-earth way of life that makes this place feel like nowhere else.

Those who know the Islands will not be surprised to learn that the people who welcomed me were Native Hawaiians, whose ancestors conceived the concept of “aloha.” Far more than simply “love, greeting, farewell,” this word’s many meanings include compassion, mercy, sympathy, pity, kindness, grace, and charity, and it is the basis for all the other Hawaiian values we cherish. Related concepts like malama (to care for), ‘ohana (family), ho‘okipa (hospitality), and kokua (helpfulness) formed a foundation upon which succeeding waves of immigrants layered their own cultural values to create the lifestyle that has flourished in these Islands.

Some people call the expression of these values the aloha spirit. Some see it symbolized by the “shaka,” that friendly thumb-and-pinkie hand waggle that says “hello” in a uniquely local fashion. But everyone knows aloha when they experience it: It’s the neighbor who brings you a bag of mangoes from her fruit-laden tree . . . the stranger who stops to give you directions when you’ve lost your way in Kula or Ha‘iku    . . . the driver who lets you into a line of traffic, then grins as you mouth “Thank you” and wave him a shaka. That this Good Samaritan may have a different accent, eat foods that seem strange to you, hold different cultural values, is incidental. The spirit of aloha binds us, and makes us proud of these tiny islands that hold so much peaceful diversity.

The importance of preserving this attitude goes far beyond our desire to maintain an island lifestyle, beyond nostalgia for a past that admittedly grows more idyllic with time. In a world that defines itself as Shi’a vs. Sunni, Hutu vs. Tutsi, Christianity vs. Islam vs. Judaism . . . few societies offer a more positive example of living together harmoniously than Hawai‘i’s.

Yet many longtime residents fear that the spirit of aloha, the kind of warm acceptance that welcomed me years ago, is disappearing under the rising tide of newcomers and the stresses of a rapidly growing population.

More than a decade ago, community leaders in Honolulu decided to address that very concern. At first they thought the task meant reforming state government—but the group soon realized that aloha isn’t something you can legislate. It takes individuals to make a difference, and it’s the little things that count—the friendly gestures Islanders share, the helpful things we do, the way we accept each other’s differences and celebrate each other’s cultures.

The group created a list of actions anyone could practice: holding the door for someone, returning a shopping cart, picking up litter. They even created a slogan that expressed their idea, then printed bumper stickers that have made the phrase “Live Aloha” a familiar concept around the Islands.

People I’ve talked to recently tell me how difficult it is these days to “Live Aloha.” Yet many of them shared ideas that were strikingly similar to those suggested by the Live Aloha campaign.

“It starts at home,” with how respectfully people treat one another, says chanter Charles Kaupu. “If you respect yourself, you can respect everyone around you.” He cautions that a society whose focus “has shifted to winning at all costs” is the opposite of the Hawaiian ideal of pono—right action that keeps humanity in balance with God and nature—and with the ethic of “community before self” that immigrant groups brought with them.

Malama ‘aina—caring for the land—must be a priority, says Kaupu. Hawai‘i’s is a fragile ecosystem, already reeling under the impact of population growth and development. Failing to appreciate that fragility, the unique history and way of life here, will have severe consequences, which is why this native Hawaiian has made it his goal to share with newcomers Hawaiian attitudes and their relevance in modern society.

For community leader Audrey Rocha Reed, who grew up in the plantation village Hamakuapoko, east of Pa‘ia, the aloha sensibility is closely connected to Maui’s plantation past.

“Plantation camp life taught me this,” Reed told the Maui Chamber of Commerce when she received the T.S. Shinn Award for community service in 2003: “to be loyal first to family and not bring them shame, to be loyal to friends and to respect their cultures, to share any bounty I might have with others, to be honest, to work hard, and to step forward when asked to help. These are the lessons everybody in a plantation camp learned.”

You don’t have to be a kama‘aina (“child of the land”) to understand this spirit. Lois Reiswig, who moved to Maui less than a decade ago, is doing her best to encourage new residents to participate in island life. “I met a lot of people on the West Side who didn’t feel a sense of community,” Reiswig says. She organized a monthly luncheon that brings women together from different parts of the island to socialize and network. Reiswig believes “The only way they’ll love Maui like I love Maui is to learn about it and participate,” so she urges the women in her lunch group to “find a nonprofit that supports your passion. Pick one, and get involved.”

One young Maui-born community leader had never heard the story behind the Live Aloha slogan, but his thoughts, too, focused on the individual’s responsibility to act with aloha.

Maui is still unique, says Maui Economic Opportunity executive director Sandy Baz, because of “the friendliness of its people, their openness whether you know them or not. If you choose to have an aloha attitude, you’re going to fit in perfectly.”