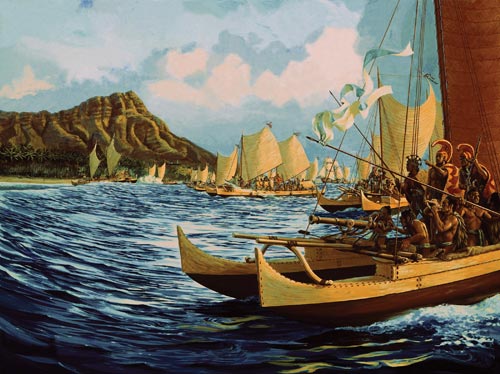 For twenty years, artist-historian Herb Kawainui Kane was my friend. He was not just a vast source of information about ancient Hawai‘i and Polynesia; he personified aloha. Until his death on March 8 at the age of eighty-two, Kane resided in South Kona. Some considered him a recluse, but I found the opposite true. During visits, he would “talk story” for hours.

I became aware of Kane when I was seven and saw an illustrated map he had designed for the December 1974 issue of National Geographic. Kane’s map (produced with the Bishop   Museum’s Kenneth Emory) showed the peoples of the Pacific and their canoes.

Two years later, the Hokule‘a completed its landmark journey to Tahiti and back. Kane had designed the voyaging canoe for the Polynesian  Voyaging Society, a group he co-founded in 1973 with anthropologist Ben Finney and Tommy Holmes, paddler and author of The Hawaiian Canoe. Their original goal was to duplicate the long-distance canoe voyages mentioned in ancient chants, but Kane had another goal, too.

“Recreating the central object of the ancient culture [and] taking it to sea might stimulate a cultural revival,” wrote Kane in Voyagers, his 1991 book.

On March 31, I spoke with Roland Cazimero about the lasting impact of Kane’s work, including the Hokule‘a. Even before the vessel’s initial interisland cruise, Cazimero and Maui’s Keli‘i Tau‘a had recorded the concept  album Hokule‘a.

“Through Herb’s paintings, I could see the Hokule‘a sailing before it had actually sailed,” said Cazimero. “It was flying on the water! We knew nothing about the ancient canoes and he taught us. His paintings are just magical. He brought our past to life. Na ke kahuna ka lai wa‘a kaulua [the master builder of the double-hulled canoe], Herb Kawainui Kane.”