You and I are older than the stones along the Puna shoreline. These stones started just a few years ago as gobs of lava from Pele’s current eruption, gobs that dripped into the sea only to be tumbled and polished then lobbed back onto the shore. Being new, they are uniformly black, unchipped, free of lichens and stains, and so round that each new surge of the sea sends them rolling around and against each other. When that happens—when the sapphire sea charges against the banks of pure black spheres—the stones rumble and clatter like a roomful of chattering kindergarteners.

I was there last year with a Hawaiian teacher, a man with deep family roots in Pele’s terrain. “These are pohaku,” he said, indicating the stones. “Po means night. Blackness. Original darkness. And haku is to make, to invent, as in a haku lei. Pohaku are the raw materials of our culture. The gods gave us these and said, ‘This is all you need.’” The sea pounced, and the stones noisily rearranged themselves. My teacher said, “We are a people of the stone age.”

The Hawaiians are to be admired among all the peoples of the Earth for the economy of their inventiveness—creating wonders with few materials. Hawaiian poetry is so beautiful despite, and in fact because, it was created without such seemingly necessary letters as D, L, S, and T (not to mention perfectly silly letters such as X, Q, and “silent E”). Same goes for material construction on both the grand and the minute scale. No lead, steel, glass, or ceramics, copper, bronze, cement, rubber, or plastics. Just sticks and stones.

Pohaku foremost. Pohaku are the essential building materials of traditional Hawaiian culture, and they remain with us as the primary evidence of the works of old, works that are simultaneously science and art. Some of this evidence is grand in scale—the fishponds, for example, graceful arcs of stone masterfully designed to withstand the implacable forces of ocean surge and tide. Not to mention all those house foundations and pa (platforms) that you still can find in remote coastal areas. And of course the heiau (temple sites), perhaps the greatest of which is in Hana at Kahanu Garden—five-tiered Pi‘ilanihale.

Structures like these are masterworks of dry-stack (mortarless) technique positioned in sophisticated relationship to the area landscape and to celestial motions. They also reflect an impressive social organization. For example, construction of the great heiau called Pu‘ukohola on Hawai‘i Island, built in 1790 at Kamehameha’s command, required a human chain of over 20,000 people hand-carrying thousands of stones out of Pololu Valley, a distance of twenty miles. 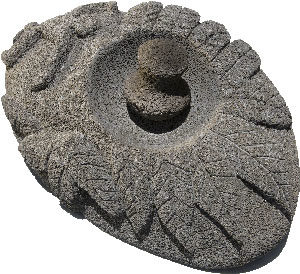 On a smaller scale, pohaku were essential to the doings of everyday domestic life. I was reminded of this when visiting Hoaka Delos-Reyes recently at his home in Ha‘iku. We looked through a museum-quality collection of old artifacts—round, flat stones with knob-like handles used for polishing wood or (if coarser in texture) for scraping the hair off slaughtered pigs, sling stones, octopus lures, stones with equatorial grooves so that they can be lashed for use as anchors or net sinkers. We looked at salt bowls (in which seawater would evaporate), pestles, and poi pounders. “Stone is the foundation of life,” he said. “You couldn’t heal yourself if you had no mortar and pestle. You couldn’t eat if you had no imu [the underground oven fired by red-hot pohaku].”

Then we looked at adzes. Chipped from super-dense, poreless basalt-type stone (relatively rare in the Islands), adzes of all sizes were the axes, the chisels, and the drills of native technology. They enabled the Hawaiians to fell giant koa trees, to hew them into thin-hulled canoes, and to pierce those hulls with tiny holes for the lashing-on of additional features. The adze was the essential unit of native technology.

Hoaka has dedicated his life to reviving traditional native practices of pohaku-craft. It’s an avocation that suits him physically. The compact sturdy frame, the long straight hair pulled severely back from his face, the elaborate genealogical tattoos that ornament his muscular arms—in a glance you know that he is kanaka maoli, native. His speaking style is spare and quiet, a manner that is encouraged, no doubt, by decades of careful listening to the messages of stone.

“It’s not you who shapes the stone,” he told me. “It’s the stone who shapes you. It seeks you. It tests your abilities. It determines your determination. It teaches patience, consciousness, it teaches you about yourself.” In his yard are many monumental pohaku, some of which he has altered. (One astonishing, mirror-polished sculpture represents Kihawahine, the famous mo‘o or lizard-goddess who was known to frequent the former lake Moku‘ula in Lahaina.) Other pohaku remain untouched. Hoaka is waiting for them to speak. “The stone has a mind of its own that teaches you when it wants to work.”

Any discussion of pohaku is, obviously, a perfect blend of rock-solid practicality and mythic spirituality—a combination that makes Western minds suspicious but that makes perfect sense in the Polynesian universe. In his classic work Ruling Chiefs of Hawai‘i, Hawaiian historian S.M. Kamakau offers this piece of lore: “The Stone-of-Kane (Pohaku-o-Kane) consisting of a stone set upright in the shape of a pillar, every family and every countryman could erect as an altar where offerings were made to the gods as penance for sins committed by any member of the family. Here he unburdened himself to the god by repentance for sins of the flesh and by prayer offered by the family. This Stone-of-Kane was a place of rest and refuge and the height from which a man conversed with the god in the heavens.” Thus the pohaku represents a very pragmatic poetry, and it resonates with spirit.

In pre-Christian Hawai‘i certain pohaku were themselves recognized as divine. As such, they were anointed and prayed over and named. During the widespread conversions of the early nineteenth century, these akua pohaku presented a real dilemma. Just because the people were turning away from the old gods, that didn’t mean that the gods were going away, especially not gods of native stone. It’s difficult to imagine the agony people felt as they buried these stones, or submerged them, or otherwise condemned them to muffled obscurity.

To truly “get” pohaku, one must cast away the Western assumption that rocks are inert, lifeless pieces of humdrum nothingness. Pohaku are alive and speaking with slow, slow, slow but fundamental messages.

While thinking about this, I went to visit Rock Man at his Kula home. He’s a haole, yet he’s been practicing the native art of dry-stack rock construction on Maui for thirty years. He asked me to use his nickname, partly because he doesn’t want attention, and partly because he has become something of a legend: His work is so distinctive, full of organic choices that emphasize the beauty of the stones’ natural forms, that people will look at a wall or flight of stone steps and say, “Rock Man did that.”

“It’s tough work,” he told me. “My fingers used to be an inch longer. Rocks will challenge you on a daily basis. How strong are you? How much endurance do you have? How smart are you? How quick are your reactions? What’s your pain tolerance? They test your patience. They challenge you in every way.”

Then he said, “We think we’re so important, but we’re just temporary. The rocks . . . they’ve seen it all. They’ve seen your granddaddy’s granddaddy. They’ll still be around long after we’re gone.”