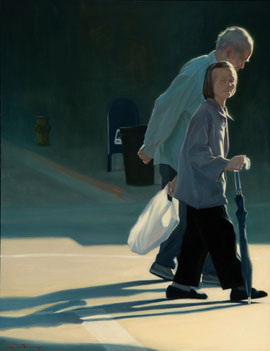 There’s a painting in the lobby of the First Hawaiian Bank on Bishop Street in Honolulu, an oil-on-board depiction of an elderly couple crossing the street. The woman holds her umbrella like a cane. The man is taller, but the curve of his back brings his head close to hers, as though he were imparting a secret, one of many they have shared over a lifetime. Light traces the edge of their faces and forms, casting attenuated shadows behind them.

It’s a remarkable painting, this piece entitled Crossing, with its everyday subjects and deceptively simple composition. It invites our imagination to fill in the details of these strangers’ lives, while reminding us how rich and worthy of our attention is the ordinary world around us.

Its creator is a Maui artist young enough to be that couple’s grandson.

Kirk Kurokawa is a storyteller who uses paint rather than words. People fascinate him: imagining who they are, what they care about, how they fill their days. He photographs them as he finds them, in public places, aware of him or not, and from those snapshots paints the evanescent moments of their lives. He may not get all the details, depicting these people he has never met, but oh, how he captures the soul.

We didn’t know, when we decided to feature him, that Kurokawa was about to open a solo show at the Contemporary Museum’s First Hawaiian space—where that portrait of the couple will hang until May 29. We just knew we’d been captivated by his work since 2003, when his self-portrait debuted in the inaugural Schaefer Portrait Challenge, a statewide competition sponsored by the Maui Arts & Cultural Center. In the painting, the artist leans against a wall, brushes in hand, an air of quiet defiance to his stance. The title, Wanting Distinction, is particularly apt: Although he had earned a BFA with distinction from the California College of Arts and Crafts (CCAC), and had been a commercial illustrator on the Mainland, back on Maui Kurokawa was working in a frame shop to pay the bills.

“I saw his self-portrait and sent him an application for a solo show at the Hui,” says Inger Tully, curator of education for the Contemporary Museum. At the time, Tully was program director for Hui No‘eau Visual Arts Center in Makawao. With her encouragement, Kurokawa applied for and got his first solo show at the Hui. Over the next couple of years, his work appeared in the Artists of Hawai‘i invitational exhibit at the Honolulu Academy of Arts, and his painting of three schoolgirls, Beginner’s Mind, won the Art Maui jurors’ award.

“When I’m painting, I’m not thinking about technical things,” he says. “I wonder what these people are thinking about. There are glimpses of good, of wisdom and history being passed along in everyday lives, and most of the time we miss it. My goal is to emphasize these experiences.

“This element of storytelling comes from my background in illustration,” he adds. “American illustrators such as N.C. Wyeth, J.C. Leyendecker and Norman Rockwell were big influences.”

Those illustrative qualities may provide the framework for storytelling, but—like the movie fan he is as well—Kurokawa never gives away an ending. He is content to have viewers bring their personal experiences to his paintings, their own conclusions to the story.

Jan Sato first taught Kurokawa when he was at Lihikai Elementary, and remembers him as a kid who loved painting and drawing. By his sophomore year, student and teacher were both at Baldwin High School. “He was thinking about architecture as a more acceptable pursuit, but he didn’t really like it. After he graduated, he asked me to help him put a portfolio together to get into CCAC.” 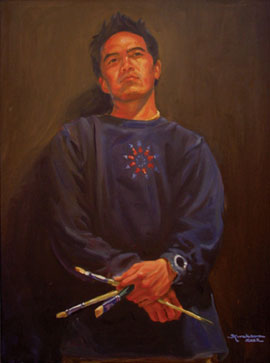 Kurokawa stayed on the Mainland after college. “I illustrated books, casino cards, websites. . . . But LA and San Francisco were a culture shock. My ideas and priorities are very different from a lot of people I met in LA.”

Two years after returning to Maui, Kurokawa made that stunning debut at the Schaefer Portrait Challenge. When the Challenge was held in 2006, Kurokawa won the $15,000 jurors’ prize.

His subject this time was Tadashi Sato (no relation to Jan). Like Kurokawa, Sato had grown up in a working-class Maui family. He attended art school in New York on the GI Bill just as abstract impressionism was becoming a major art movement. Sato became an internationally recognized painter, one of the most important artists Hawai‘i has produced.

Then, like Kurokawa, Sato left the Mainland art scene to return to Maui.

“The way Kirk captured Tadashi was brilliant,” says Tully. “There’s a lot of integrity to Kirk’s paintings, a lot of respect for his subjects. And his use of composition is always interesting. It keeps the conversation going.”

The Schaefer Portrait Challenge was exhibited at the Maui Arts & Cultural Center in January and February of 2006. Tadashi Sato died four months later at the age of 82.

“I didn’t meet Tadashi until the Schaefer competition,” says Kurokawa. “But I admired him. I got to really talk with him before he passed away, about how he got where he was; and how hard it is, working as an artist. He told me about hearing what other people say, but sticking to your gut, to what’s right for you.”

That message continues to resonate for Kurokawa. Lately his repertoire has been an intriguing synthesis of his signature realism and an exploration of edgier styles. When Allison Wong, curator of the Contemporary’s First Hawaiian exhibition space, met him, she was impressed by Kurokawa’s modesty and his determination not to be pigeonholed.

“He went to California to help a cousin, also a fine artist, install a show. He took photos of that experience, and made a series of paintings that are a wonderful departure from his other work.”

The half-dozen paintings Kurokawa gleaned from that trip comprise roughly half the exhibit. Monochromatic, they move from a realistic depiction of his cousin as she crouches over artwork laid out on the floor; to close-ups surprising in their angles and emphasis.

“I started doing monochrome a couple of years ago,” says Kurokawa. “It’s done with colors: browns, blues, yellows, white. I like being able to create interesting compositions by changing the tones of gray.”

“Kirk has a fan club at Baldwin,” says Jan Sato. “I hired him to do a couple of workshops for my AP [Advanced Placement] art students.

“There’s a painting he did called Zewski; it won the juror’s prize at last year’s Hui members’ show. It’s those girls.

“On the last day of school, we were cleaning the art room, and Kirk came in, carrying this little package. One of the girls said, ‘We wanted you to remember us, so we hired Kirk to do nine paintings.’ He had painted each of them as a gift for me. Nine four-by-four squares. The girls paid him, though it couldn’t have been what he was worth, and I think they gave him two weeks to paint. It must have been a huge challenge. I was overwhelmed.”

You can see both Zewski and The Real McCoy in the Contemporary’s exhibit. Together, they illustrate the breadth of Kirk Kurokawa’s talent, his commitment to honoring the generations who came before, and to passing on the gift to those who follow.