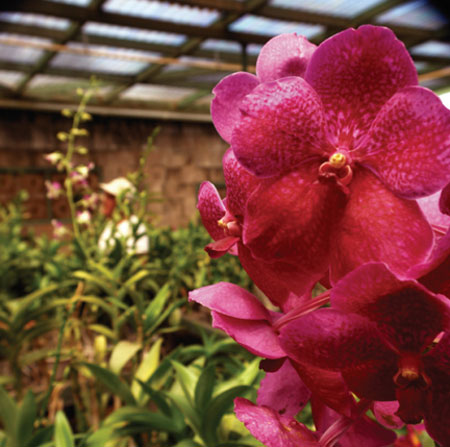 “Would you like a plant?” says Maui orchid grower Wilfred Suzuki. He reaches into the teeming foliage on a grow bench and tugs loose a lovely specimen of Dendrobium Wai‘anae Valley ‘Ruffles.’ The plant bears the classic features of an orchid—a few simple strap-shaped leaves on husky canes, minimal root system with just a few corky fingers clutching loose rocks and bark chunks, and a spray of beguiling flowers, these being pure pale-green with an alabaster luster. I’ve seen that look before, those innocent eyes    batting at me. I think of the Elvis song: “You’re the devil in disguise.”

As Wilfred hands me the plant, I say: “Oh no. Now you’re going to get me into trouble.”

I look around. Orchids have overrun this man’s entire property. It’s a standard residential lot on an old side street in Pukalani. Concrete-floored shade houses butt right up to the roadway, jam up against every property edge, and completely swallow the house. They form a labyrinth of interlocking passageways amidst table after table heaped with robust-looking orchids. Must be a million plants here; 18,500 square feet in shade.

I want to tell him that I already have too many orchid plants. It’s true. I have three. And those three are working on me day and night, hypnotizing me into getting a fourth.

My hand shoots forward. “Thank you. It’s beautiful.” I can almost hear the roar of unanimous satisfaction from all the shade houses. He’s got four!

Wilfred Suzuki started raising orchids around 1960 “as a hobby for my wife, who came from Japan,” he tells me. “To teach her, I had to learn.” Also, he had to create homes for his rampant collection even while he worked six days a week as a mixer/driver for Hawaiian Cement. He says, “I made all this in—I would say ‘my spare time,’ but there was no spare time.”

Plants in the family Orchidaceae have been spectacularly successful at making their way in the world, primarily by seducing, mesmerizing, or otherwise deranging us human beings into Wilfred Suzuki-like behavior. People of Maui seem to be particularly susceptible. As a result, this island has an international reputation not only for the high quality of its plants but also for the achievements of its backyard hybridizers. No one knows how many orchids have come from Maui. But in 1991, for its fiftieth anniversary, the Maui Orchid Society tallied the major awards won by its members—over 150 from the American Orchid Society and twice that number from the Honolulu Orchid Society.

What’s odd is that orchids are relative newcomers to Maui. This huge family of some 20,000 species occurs naturally everywhere on Earth—including frigid parts of North America and the high slopes of the Himalayas—except the impossibly remote mid-Pacific. We have only three endemic species of orchids, and these are obscure inhabitants of dense, high-elevation forests and bogs. Orchids as we know them didn’t get to Maui until about the same time as the horseless carriage.

In early plantation days, the planters hired botanical scouts to explore the Pacific Rim and collect tropical crops and floral curiosities. These collections ended up in rich men’s shade houses, emblems of prestige in the early twentieth century.

But it didn’t take long, only a couple of decades, for orchidmania to leak out of there into the backyards of the peasant class—former field laborers and their children, mostly Japanese. Early growers like Ben Kodama in Honolulu began mass-producing starter pots for chain retail outlets such as the Kress Department Store.

In the late 1930s a Kress opened in Wailuku, and one of its orchid customers—who’d purchase at the daunting price of fifty cents a pot—was a pidgin-speaking, Japan-born tailor from Kahului named Roy Fukumura.

“You have to write about Mr. Fukumura.”

I heard that in every conversation I had preparatory to writing this piece. I even spoke with the president of the American Orchid Society, Carlos Fighetti, who came to Maui last June to give a talk to the Maui Orchid Society. When I asked him about Maui’s place in the national scene, he said, “You can’t talk about vandas if you don’t talk about Mr. Fukumura.”

In fact, one of the American Orchid Society’s few named awards is the Roy T. Fukumura Vandaceous Award, given each year to the best plant in a large and important segment of the orchid world. Created in 1992, the award honors the life’s work of a self-taught hobbyist— living, by the way, in the hot, sandy, hard-on-orchids conditions of “Dream City” Central Maui—who had an Edison-like genius for inventing new plants.

Also, they crossbreed with enthusiasm. For most living creatures, a species is a species, a distinct breeding unit. But orchids will cross species easily; they even cross at the genus level, which equates to crossbreeding a tomcat and a cheetah.

This diversity-plus-promiscuity explains why certain people become obsessed with breeding orchids. It takes long-range planning, a fascination with details, and a superhuman ability to wait for results. Imagine a lifelong chess game that also requires knowing every statistic of the NFL—then multiply that by as many such games as your mind can handle. That’s what it takes to be a Roy Fukumura.

Among his many botanical inventions is the most important orchid hybrid of all time, a bigeneric cross known as Ascocenda Yip Sum Wah, which has received over 100 merit awards from the American Orchid Society.

“Fuku,” though, was just one of many pioneer orchidists on Maui, many (though not all) gone now—Ralph Yagi, Noboru Koito, Hiroshi Tokunaga, Ann Boteilho, Bill Blietz. . . . To attempt to name them is to fail inevitably from omission. And yet the Maui orchid tradition renews itself with fresh hobbyists every year. Nurseries such as Exotic Orchids in Ha‘iku (run by Bill Blietz’s son Mike and his wife Carol) and Tropical Orchid Farm in Huelo (Jeff Parker) are respected internationally for their high-quality plants and their orchid passion.

Ivan Komoda is living the contemporary expression of the Maui orchid saga. Born and raised Upcountry, he went to college and lived fifteen years on the Mainland, trained as a medical technician, and spent much of that time in cool Seattle, where miltonia-type orchids—flat-faced “pansy orchids”—grow well in window boxes. When Ivan came home to Maui, he chose to live at high elevation and specialize in this type of flower, exploiting his technical training and bonding with an island tradition. Now he sells to international customers—buyers from Holland, for example, who will be mass-marketing his hybrids and paying him royalties on all sales. Royalties! He’s a sort of orchid rock star.

By the way, those miltonias are very good-looking plants. I should get one. . . .

These tips from the Maui pros will help you feed your passion.

Find the right orchid for your location.

Orchids are the largest plant family, with well over 100,000 types, both natural and man-made. They occur naturally on every continent except Antarctica. Some thrive in hot and dry regions; some like it mountain-cool. Ask questions when you purchase an orchid and be prepared to experiment. If one plant fails on you, don’t assume they all will.

Take advantage of the expertise of those who have gone before.

You don’t want to introduce a virus or other pest into your collection. And why put lots of care into underperforming varieties? If someone is giving away plants, there’s a reason. Seek out the best you can find.
Don’t water excessively.

Most orchids are epiphytes—they grow naturally high in the air, lodged in the crevices of tree limbs. Soggy and boggy is no good. Breezy and misty is. Allow the roots to nearly dry between waterings, say once a week.

Keep moist when active, but allow to dry out between waterings when dormant:
Cattleya, Oncidium, Brassia, Dendrobium

Give them indirect light, but plenty of it.

Blazing, direct sunlight will cause distress; orchids are well suited to dense jungle darkness. Think of tree limbs high above the jungle canopy. A covered lana‘i could be ideal.
Watch the leaves.

Use a gentle liquid fertilizer when you water, preferably something formulated for orchids. Follow directions. Many growers advocate a post-flowering rest period. Let your orchid go dormant for a while. When you see the plant pushing new leaves, give it the juice.
Repot rarely.

Orchids need very little root room. A newly potted plant should go at least two years before changing. Repot when the medium starts to break down and get soggy, or when roots start to hang over the edges of the pot. Use bark or other coarse medium. Never pack the roots into soil the way you would most other plants. Watch for teeny pests.

Orchids are generally not prone to pests, but keep an eye out for the tiniest ones—aphids, thrips, scale insects, and mealybugs. In the old days, Maui growers used to spray plants with “cigarette water” made by steeping Bull Durham tobacco.
Leave the spike.

Don’t cut the flower spike until it is completely dried up and done. Spikes will sometimes bloom again after the first flush. And fresh cuts are vulnerable to fungi.