Molina’s ʻuke version of Taylor Swift’s hit, Shake It Off. 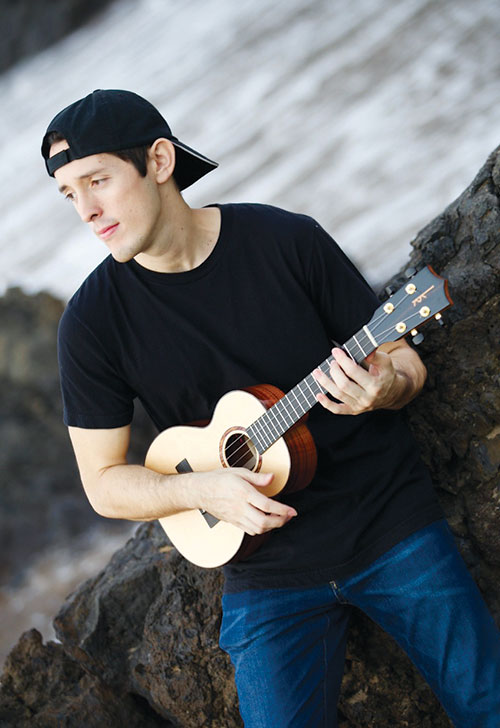 With his charming demeanor and a pedigree as a third-generation member of Maui’s largest musical dynasty, Andrew Molina could be the lead singer of America’s next superstar boy band. Except for one small hitch: he doesn’t sing. He does, however, play the ‘ukulele — with a passion and flair that critics have likened to that of ‘ukulele king Jake Shimabukuro.

In fact, Ukulele Magazine last year featured Andrew in its list “The Next Jake: 5 Up-and-Coming Hawaiian Artists to Watch,” an honor that the twenty-three-year-old does not take lightly. Jake is, after all, the inspiration for Andrew’s blossoming career.

Andrew was thirteen and hadn’t considered following in his father’s or grandfather’s footsteps as a professional musician, when a friend dropped by with an ‘ukulele and piqued his curiosity. Dad Jay, who started playing bass at the age of eleven, had never pushed the family tradition on his only son. But after noting Andrew’s newfound interest, Jay took him to see Jake in concert and arranged a post-show meeting. From that night on, Andrew was hooked on ‘uke.

Jake has since become a close friend and mentor, while Andrew has gone beyond imitation and into his own style. In 2010, he penned his first song. Four years later, eight of the eleven songs on his debut CD, The Beginning, were original compositions. He describes his music as “a mix of pop, Hawaiian, rock, Latin, and a little bit of jazz. . . . I’m always trying to find a way to take the ‘ukulele to another level.”

With Jay as his business manager and frequent accompanist (on bass and guitar), Andrew regularly performs at The Shops at Wailea and resorts such as The Ritz-Carlton, Kapalua, and the Fairmont Kea Lani. This fall, father and son will embark on their second West Coast tour, hopefully with a new CD in hand.

Andrew’s beaming smile is irresistible and infectious, much like his stage presence. His passion for playing is obvious, but it’s the interaction with his audience that fuels his drive. Performing live, he says, is “such a thrill, I can’t see myself doing anything else.”