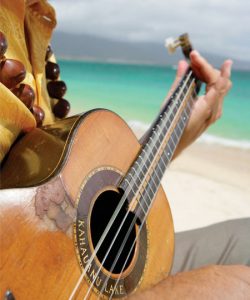 When Jake Shimabukuro told me that his favorite Hawaiian ukulele player was Eddie Kamae, “like Miles Davis on trumpet or Jimi Hendrix on guitar,” I was reminded of the first time I saw Shimabukuro play at the Jazz at Wailea Festival a few years ago. In his rhythm section was a bass player, Benny Rietveld, who’d once played with Miles Davis—and Shimabukuro’s astonishing hard-swinging and hard-rocking electric ukulele playing, complete with chorus pedal and wah-wah effects, had me reaching for the inevitable comparison: the Jimi Hendrix of the uke.

Shimabukuro’s lightning technique was incomparable, and he was exploring compositions that included, along with original pieces, Bill Evans’s “Waltz for Debbie,” Pat Metheny’s “Travel,” and “Stain” by Chick Corea.  His soaring rock-jazz fusion was staking out new territory for his instrument.

But for Shimabukuro, “That was a phase I went through. Now I’m purely off mike or I plug straight into the system. I’m back to keeping the natural timbre of the ukulele.”

At last year’s Starbucks Ukulele Festival, he was innovative and impressive in an entirely different way. Alone, with no special amplification, he structured a melodic and harmonic buildup on George Harrison’s  “While My Guitar Gently Weeps” that was so dramatic in its dynamics and tempo changes, it made the tune into a little tone poem. He displayed his chops in “Sakura,” a lovely Japanese folk song, not by being flashy, but by making an ukulele sound like a koto. During our interview he seemed reluctant to describe how he did it, like a magician protecting his secrets, but finally admitted to “a different attack for a percussive tone, and applying the fingers closer to the bridge.” For his last song in the festiva, he chose an entirely different realm of music with Schubert’s “Ave Maria.”

It’s a remarkable repertoire, but it started, as Shimabukuro told me, with traditional and contemporary Hawaiian music in high school. You can hear in his playing that he never loses the haunting plangency of the true Hawaiian feeling for the ukulele. But his focus remains finding his own style and repertoire. “The way I’ve always approached music is that there’s already been an Ohta-San [ukulele virtuoso Herb Ohta]; there’ll never be another Eddie Kamae. I have to find my own style and voice, express who I am, be as true to myself as other ukulele players are when I’m just awestruck by them.”

And so he keeps exploring his instrument. He’ll tour with Jimmy Buffet or Bela Fleck and then join the Honolulu Symphony in a collaboration with Matt Catingub on original pieces for ukulele and orchestra.

Shimabukuro’s success has been remarkable. He’s played at the House of Blues and appeared on The Late Show with Conan O’Brien, but what he still most enjoys is not the size or prestige of his audiences but their universality. The most technically accomplished player I’ve ever seen reminds crowds he wasn’t the “sharpest knife” at ukulele playing, but he practiced for hours and hours, part of his cheerful message that the ukulele is an instrument for anyone and everyone.

“One of the most charming things about the instrument is that it’s not intimidating. When I do a show, I see really young children and people 60 to 70 years old because the uke speaks to everybody.” So does one of its youngest and brightest star performers.

Jake Shimabukuro’s latest release, Gently Weeps, is distributed in the U.S. through Hitchhike Records at Borders and Amazon, and via www.jakeshimabukuro.com