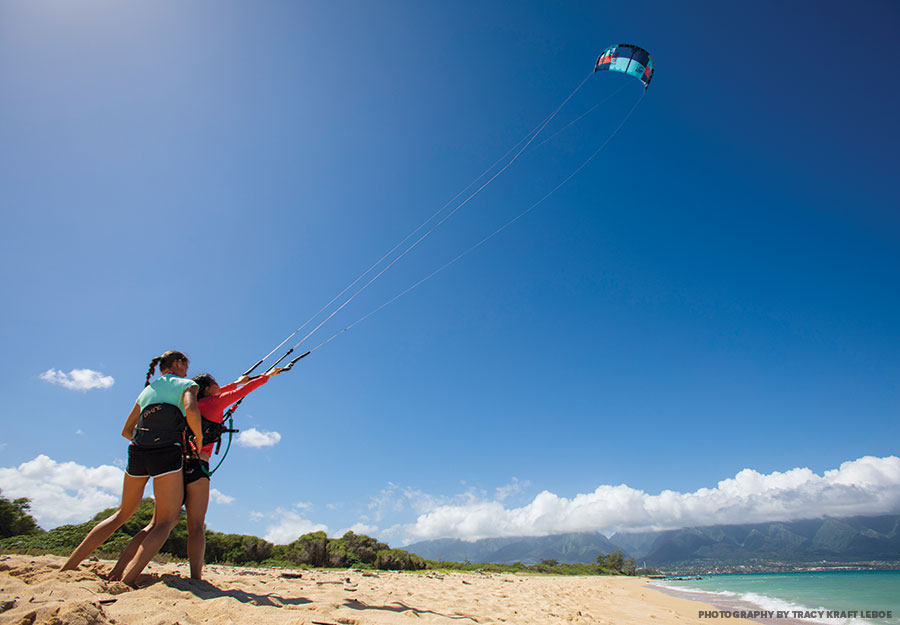 Along Kanahā Beach, the morning sun is rising into a clear blue autumn sky, but at the moment, I couldn’t care less. Against my will, I’m rising, too—my feet kicking the empty air as I’m pulled into the sky! How could this be happening?

“Nobody learns how to kiteboard in a day,” Kristin Boese Solbach had assured me earlier, as we cruised along Maui’s north shore, her car crowded with gear and my stomach clenched with nerves.

I take her word as gospel. A nine-time women’s kiteboarding world champion, Kristin holds the Guinness World Record for the most world championships won by a woman.

She grew up behind the Iron Curtain, where excelling in athletics was considered patriotic. “[East Germany] wanted to show that we’re just this tiny country, but we are a force in the sports world. From the time I was little I wanted to be a professional athlete.”

She learned the sport in 2001, and by the following year, she had captured the title of German Kitesurf Champion and climbed to twelfth place in the Professional Kiteboard Riders Association world ranking.That was just the start of her trajectory. Before retiring in 2013, Kristin not only dominated her sport, but also proved one of its greatest ambassadors. She joined the International Kiteboarding Association’s campaign to add the sport to the Olympic games, alongside entrepreneur and avid kiteboarder Richard Branson; and former windsurfing champion and Olympic medalist Mike Gebhardt. (Look for the first Olympic kiteboarders at the Paris 2024 Games!) In 2009, she launched the nonprofit KB4girls Foundation to connect and empower women through kiteboarding. In 2014, she moved to Maui and married fellow former professional kiteboarder Sky Solbach.

Would all of that experience be enough to teach this newcomer how to glide across the water using wind power alone? It’s time to find out.