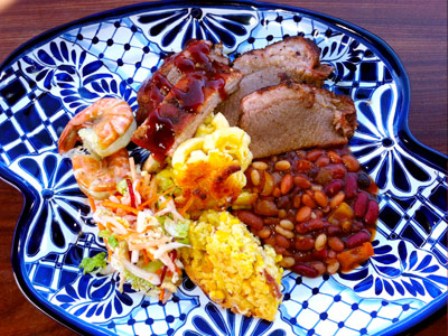 Since prehistoric times, humans have roasted food over open fires, improving the flavor, color, aroma and digestibility of meats and game. In 1248, King Louis IX established the Confrerie de la Chaine des Rotisseurs, primarily because he loved roasted meats so much that he hoped to establish best methods for roasting geese. Eventually the organization’s charter expanded to include guidelines for roasting all forms of game, fowl and meat, but the origin of the prestigious organization focused first and foremost on barbecue.

Maui’s king of the grill is Rob Wheeler, a Texas transplant who, with his wife, Kristin, and partner, Dave Singhaus, has answered the prayers of barbecue lovers by creating what has to be the best method of mobile catering yet devised. Iron Imu’s custom-designed smoking and grilling trailer delivers Texas-style barbecue to locations and events all over the island.

Three nights a week, the trailer sets up in various resort parking lots on West Maui, and starting around 5:30 p.m., Iron Imu dishes up barbecue until everything is gone. Which sometimes happens within an hour! Other nights, you may find them catering a party in Wailea, or delighting fans at canoe races, festivals and other community happenings. 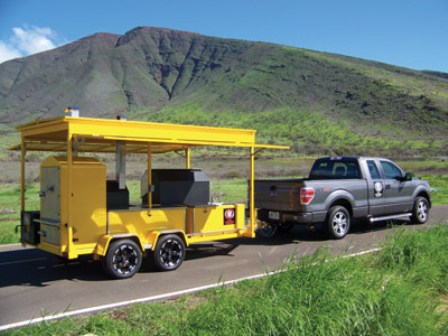 Rob designed the big yellow barbecue rig himself, then had it constructed and shipped to Maui from the Lone Star State. Inside is a giant grill known appropriately as “the grill meister,” a smoking pit called “the sniper,” and “the vault” where the smoky flavors develop. A sink, prep table, and impressive multitasking butane burner round out the roving kitchen.

Rob and Dave offer guests of their catering gigs the chance to learn the scrupulous art of authentic barbecue by participating in their Smokin’ School. Early in the day, students witness the meat being given a good rub, then placed in the smoker, where it remains until early afternoon. Smoking tenderizes the meat and infuses it with flavor, after which it’s transferred to the grill and given a good sear to seal in those mouthwatering juices.

On any given day, Rob and Dave may prepare fall-off-the-bone short ribs, meaty and juicy baby back ribs, expertly marinated tri-tip steak, sausages, or succulent, bone-in smoked chicken. Homemade rubs are the secret to the delicious flavors of Iron Imu’s smoked and grilled meats—and the secret is, well, ironclad. So are the formulas for sweet-tangy barbecue dipping sauces and Iron Imu’s formidable side dishes.

Take, for instance, Grandpa Ford’s mac ‘n cheese. When Kristin’s Grandpa Ford described what he imaged as the perfect version of the beloved dish, his granddaughter set off on a quest to create just that. The result is the cheesiest, creamiest, lip-smackingest mac we’ve ever tasted. Another menu standout is the slightly sweet and oh-so-tangy red-pepper-and-cherry slaw, a refreshingly upscale break from the usual mayo-laden option.

Classic molasses-thickened baked beans are another serious contender on the alfresco plate, as is a souffle-style corn pudding that’s as good as they come. For dessert, lucky patrons can choose Kristin’s lilikoi cheesecake or scrumptious pineapple upside-down cake.

Kristin and Rob graciously offered to share the recipes for one of Iron Imu’s most-liked side dishes, Uncle Kunkel’s Green Beans (created and handed down by Dave’s flamboyant uncle), and for their almost famous tri-tip roast.

If you’d prefer to experience the real deal without messing up your kitchen, mosey over to Noelani Condominium Resort on Mondays around 6 p.m., Kahana Falls at 5:30 p.m. on Tuesdays, and the Mauian at 5:30 p.m. on Wednesdays. The Iron Imu dishes it up until sold out, and they always sell out fast. Dinners are $9 to $15 and most include a choice of barbecued meats and three sides.