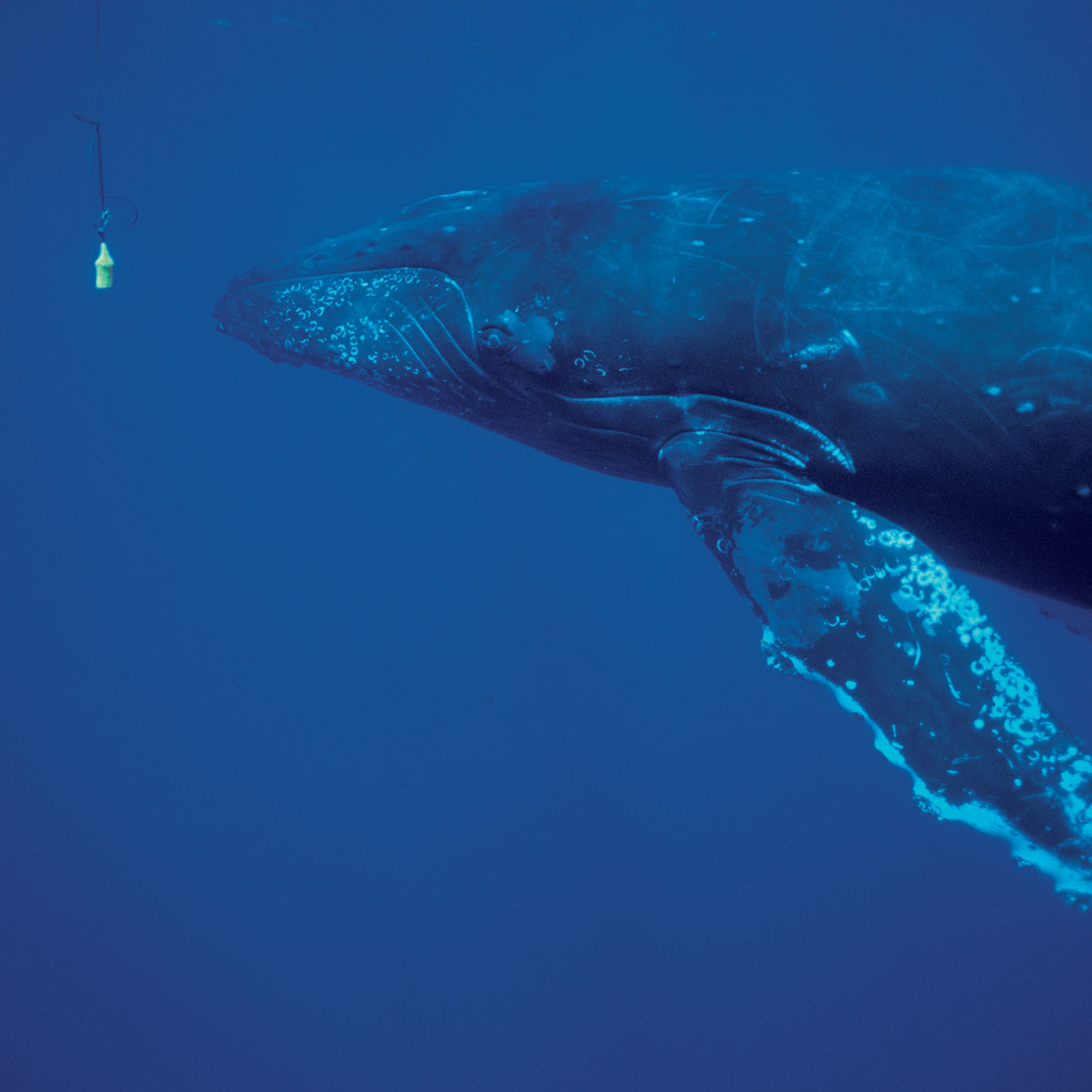 Long before there was such a thing as a “whale watch,” Jim Darling took people to watch sea lions off Vancouver Island.

“Nobody thought we could see whales on a regular basis,” he says. “But we kept seeing them! People would ask me questions about them, and I thought I should find some answers.”

Darling started taking pictures of the whales when he was out on the boat. Soon he could identify them by their distinctive markings, and before long, he had the first “aha” moment in what would become a lifetime of studying whales—he realized the same whales were returning to the same place every year.

Thirty-some years later, as the cofounder, scientific advisor and director of the nonprofit Whale Trust research organization, Darling says the thrill has never faded. “Whales are endless mysteries. You get these little bits of progress that are so intriguing that you want to take the next step; go just a bit further and see what’s around the next corner.”

Today we are aboard a small research boat out of Lahaina Harbor, and Darling is looking for whales. He is lean and tan from hours on the water, the breeze fluttering his faded T-shirt as his blue eyes scan the horizon.

Each winter, Maui is a haven for approximately 8,000 humpback whales that migrate to our warm waters to breed. This clear, shallow, protected stretch of ocean is one of the world’s best natural laboratories for the study of this endangered species. That’s why, since 1997, Darling and his Whale Trust team have been exploring humpback whale song here. Discovering why whales sing would be an important piece in the overall puzzle that makes up these mystifying behemoths of the sea.

Whale Trust researchers are focusing on the song sung by males during the breeding season, which they hypothesize might be an “index of association between individual males”—a key to determining how males interact, cooperating with one another or competing for females. To test this idea, the researchers are conducting a series of “playbacks,” recording whales’ singing and playing it back to them on an underwater speaker.

Just to the right of our boat, a whale leaps from the sea. The yellow permit flag fluttering from our bow means we can get within 100 feet, close enough to see the water streaming off the whale’s grooved belly.

“Wow!” I gasp, fumbling for my camera. All around us, whale-watching boats are sailing in our direction. Darling smiles at my excitement, but he’s not ready to stop the search. “If he’s jumping, he’s not singing,” he says. “He’s not who we’re looking for.”

The research vessel is a simple white speedboat equipped with nothing fancier than a camera, a computer and a hydrophone—a sensitive underwater microphone. Researchers spend much of their time behind a desk, studying and analyzing data, so to be out in the field is always a highlight, Darling says.

That is, unless a host of other factors—from wind to whale- watching boats—aren’t cooperating.

“Everyone thinks we’re wimps because we don’t go out when it’s windy,” says Darling, “but what we’re doing is complicated; it has to be calm.”

When they get a calm day, the Whale Trust researchers will put two boats on the water to conduct playback experiments. The first task is to find a whale singing for a sufficient amount of time to get someone in the water with a video camera. Singers will stop singing when they are joined by other whales, so “a lot of times we are just getting set up, and then a whale will join and [the first whale] stops singing.”

Once they find their subject, Boat 1 stays over him with a hydrophone and GPS unit. Boat 2 goes 800 to 1,000 yards away, lowers a speaker into the water and plays back songs to the singer. The researchers in Boat 1 acoustically measure the whale’s reactions and plot his movements on a map. “We’re looking for patterns of behavior.”

Darling worked as an assistant to one of the men credited with discovering whale song: biologist and environmentalist Roger Payne. Darling still remembers the day they homed in on a singer and spent all day watching him underwater.

“To actually be able to approach the whale, and for Flip [Nicklin, renowned photographer] to take pictures that allowed us to determine its sex, was very exciting,” Darling says.

Lessons learned that day in 1979 led to years of tracking singers, photographing them underwater and recording their songs. Still, when the permit finally came through for Whale Trust to start conducting playbacks four years ago, Darling says he didn’t know if the experiment would work. “Previous research showed that whales didn’t react much, so that’s what I expected . . . but that’s not what happened. They are paying attention!”

On one memorable encounter in 2007, the researchers found a singer, recorded his song and then played it back to him. “The whale stopped singing in about seven to eight seconds, and swam away. A few minutes later, I looked down and he was right there with his nose to the hydrophone.’”

What Darling found most impressive was that “in an ocean full of singers, the whale could know that one more song was being added, and within 600 or 700 yards, was able to pinpoint a speaker that was only eighteen inches long.”

Whales seem to approach when the playback song is similar to their own song; and to ignore it or move away when the song is different.  “We’re trying to understand what’s important about song to whales, and it appears that the composition is important.”

Suddenly, a single blow breaks the ocean’s surface, and Darling aims our boat toward the spot. That’s the whale we want: “the quiet one,” not the one who’s breaching and drawing crowds. Singers tend to blow two or three times, then dive and hang motionless, nose down and tail up, fifty feet below the surface, where they might sing for an hour or more.

Idling the boat, Darling opens a case that contains the hydrophone. He drops it over the side, puts on headphones and turns dials on the control panel, listening intently to see if any singers are nearby.

When he hands the headphones to me, I hear a faint “whoo, whoo.” Darling tells me this indicates there are singers out there, some miles away. The headphones also pick up a steady buzzing, which is boat noise.

Dealing with factors like wind, other boats and whales makes patience a researcher’s most valuable asset. A rough or noisy ocean or a joining whale interferes with the audio recordings, making them unusable. Researchers may only get a handful of “good” days a year.

Someday, scientists will know everything—or almost everything—about these elusive giants of the sea. As an educational organization, Whale Trust aims to share the knowledge with the public so that future generations might better understand and protect this endangered species.

But for now, there are vast, uncharted waters.

“Any day can be a bust, or good, or extraordinary,” says Darling. “You never know which it will be. But the extraordinary days are common enough that you can’t wait to see what any new day will bring.”

Learn more about Jim Darling’s work in his new book: Hawaii’s Humpbacks: Unveiling the Mysteries. The glossy paperback is packed with everything there is to know about whales, plus stunning photographs by Flip Nicklin and illustrations by Susan W. Barnes. All profits from sales of the book benefit Whale Trust research programs. Available at Borders, Barnes & Noble or online at www.whaletrust.org.

Want to Get Closer to the Whales?

Every year from December through April, Maui is home to an array of fun and informative whale-watching tours. For a comprehensive list, visit: www.mauiwhalewatch tours.com/whale-watching-tours-directory.html.