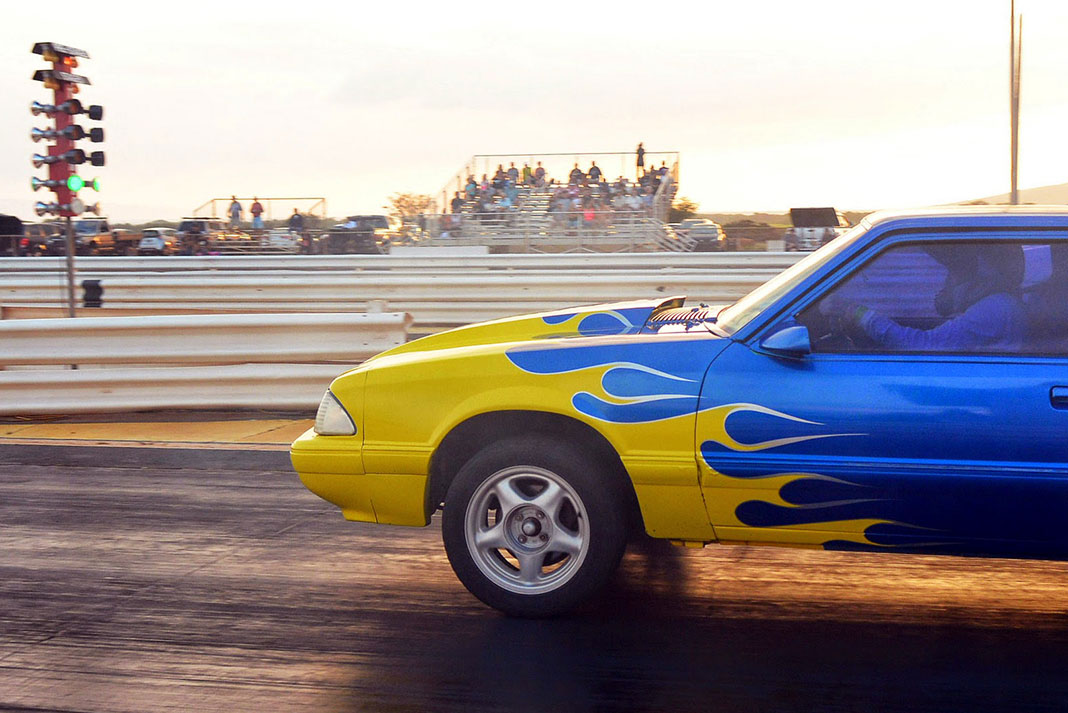 It’s probably just as well if the rental-car company doesn’t know what I was doing in its Dodge Charger a few Saturdays ago.

Going from zero to ninety-five mph in just under fifteen seconds (14.9305, to be exact) is probably prohibited in the fine print of the contract, like taking the back road to Hāna. But going ninety-five — or twice that fast if you can — is what the Valley Isle Timing Association’s monthly drag races are all about. They’re held at Maui Raceway Park on Mokulele Highway, a few miles from the sugar mill.

“The draw of the sport is just going fast,” says association president Shane Yamashita. “The need for speed.” But while an officially sanctioned quarter-mile drag race takes place in little more time than it takes to read this sentence, there’s more than just spinning your wheels to this hybrid of sport, technology and attitude.

Before Elvis, before rock ‘n’ roll, souped-up cars signaled the arrival of a new generation in post-war America. Technology that was learned in servicing warplanes was applied to making the family sedan or old jalopy go faster. And then they raced — in hastily called, highly illegal contests in Southern California dry lakebeds and concrete aqueducts — or on city streets and rural highways across America. On movie screens it was James Dean behind the wheel, a rebel without a cause other than going fast enough to outrun his demons.

What is now Maui Raceway Park was part of the old Pu‘unēnē Air Station military landing strip during World War II, recalls Mark Caires, one of the park directors and official race starter. It was converted to a drag strip in 1963, making it one of the oldest west of the Rockies.

“It started when a core group of racers took it off the street, and took it to the racetrack,” says Caires. Association membership is now between 150 and 180, from racers in their seventies to youngsters ten or eleven. They compete in various car and motorcycle classes, from barely modified family sedans to exotic 1,000-horsepower dragsters and half-size ones with souped-up lawn mower engines for the kids.

They race on two lanes a quarter-mile (1,320 feet) long. Between them is the “Christmas tree,” a T-shaped support mounted with a set of lights for each driver. The top light indicates when each car is in the pre-staging area, where they spin their tires in water to get them sticky for maximum adhesion. The next light indicates when the cars reach the starting line.

You don’t want to be standing still when the light turns green, but you can’t cross the starting line early. A perfect reaction time is .500 second, which should begin with the last amber light — which is where you found me at the beginning of this story, wearing one very cool helmet and sitting in the shotgun seat of the rented Dodge. My designated driver is Mike Rice, Western States director for the National Hot Rod Association, which sanctions the race.

Based in Southern California, Mike spends most weekends visiting tracks in a half-dozen states, authorizing facilities and vehicles. A big challenge these days is providing a safe alternative to the eye-popping street racing glorified in the billion-dollar Fast & Furious movie franchise or on reality-TV shows like Street Outlaws.

He barely spins the tires in the pre-staging area before we slowly approach the Christmas tree, coming to a stop as the amber lights . . . begin . . . to . . .