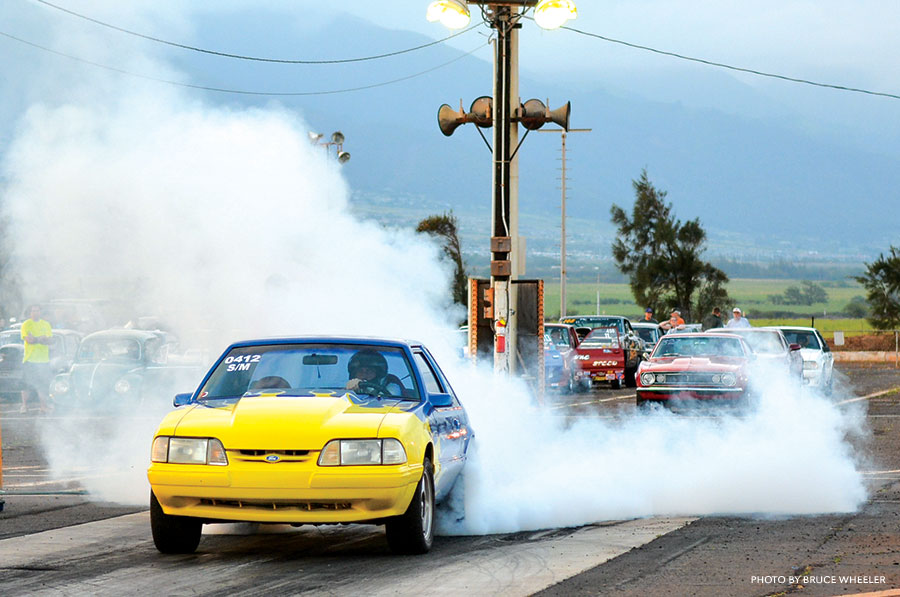 Our car breaks the starting-line light beam .5778 seconds after the light turns green.

Fractions of seconds expand in slow motion. It’s not the centrifugal, nausea-inducing head snap of an amusement-park ride, but more a jolt of adrenaline rushing up your spine, filling your chest.

The first two seconds are the initial rush. “After that, everything slows down, like you’re going for a ride,” says Mike. “It’s very addictive. The faster you go just makes you want to go faster.”

A day at the drags begins in the afternoon with test-and-tune runs, followed by qualifying heats that clock each vehicle from start to finish. That duration, called elapsed time (ET), is used to measure the vehicle’s performance.

Unlike heads-up racing, where both cars leave the starting line at the same time and the first one to the finish wins, Maui has bracket racing, which handicaps the cars on the basis of their elapsed times. So the light turns green in one lane before it does in the other. (To keep drivers from taking an unfair advantage, their ET also serves as a speed limit that they can’t exceed in the elimination run. Races have been won and lost in a thousandth of a second, more than one driver tells me.)

Elimination heats begin sometime after 7 p.m., and there are three ways to lose, explains Rice: Crossing the starting line early, getting beaten to the finish line, or beating your elapse time, which is called breaking out.

“Speed and power are important, but so is the race itself,” says sixty-year-old motorcycle racer Rick Lanham. “I love giving a competitor a four-and-a-half-second lead . . . then runnin’ ‘em down.”

Nurse Jill Kollist loves the thrill of winning in the fast-gas division; her car is painted with the slogan “World Peace in 2021.”

“I think it’s a ’72 Nova,” she says of the exotic machine. “I know nothing about cars. I leave all that to my husband. I just drive it.”

The drags are their own little world. A group of Ford Mustang owners drive to the track, change tires and race all night, then put the street tires back on and drive home. Another racer brings his motorcycle in a horse trailer.

As opposed to Fast & Furious stereotypes, drag racing is a family affair. Middle-aged men who discovered it in their teens now share it with their kids.