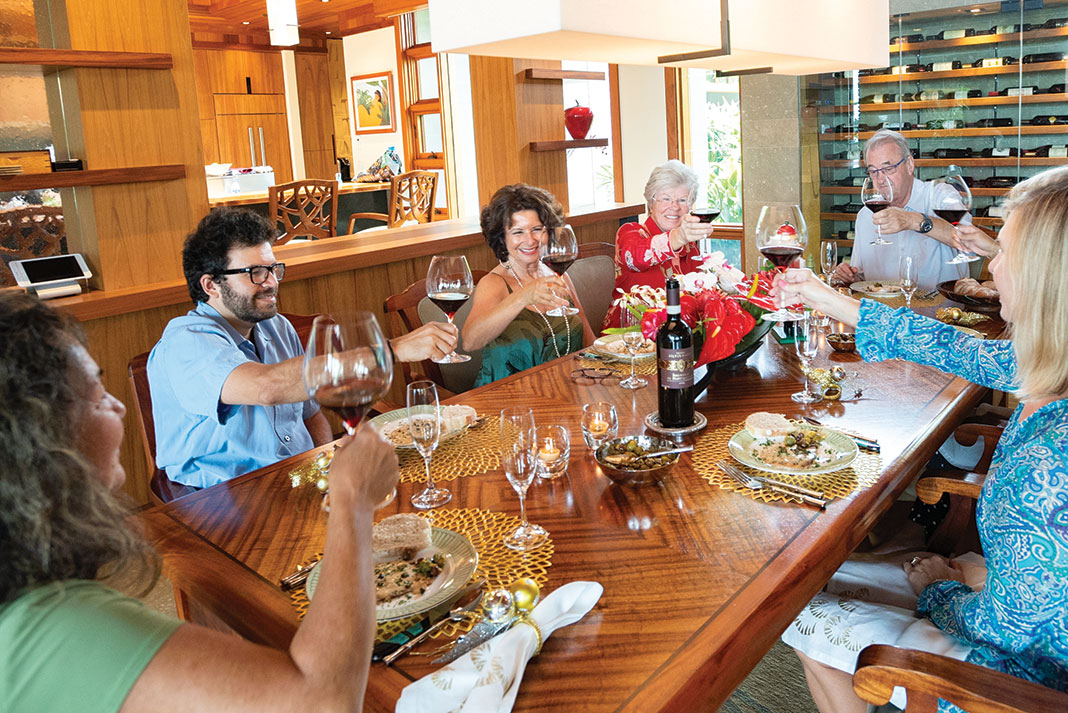 It’s barely 10:30 in the morning, and the Swiss in Taverna’s chef and co-owner, Roger Stettler, is showing. We’ve just arrived, and find he has already laid out workstations in the home kitchen of Joe and Sharon Saunders, two of his business partners. Within minutes, we’re helping him prepare the dishes for our annual Holiday Test Kitchen. A butcher-block counter, perfect for rolling out pasta, is occupied by four portions of dough wrapped in plastic film. They look like flat river rocks painted midnight black, and when I press one with my thumb, it’s firm to the touch.

Roger says, “That’s for the tagliarini. I kneaded the dough for thirty minutes; you have to mix it really well to blend in the [squid] ink.” That’s the Italian in him speaking. The half-Swiss/half-Italian Stettler is: 1) organized; and 2) a great chef. 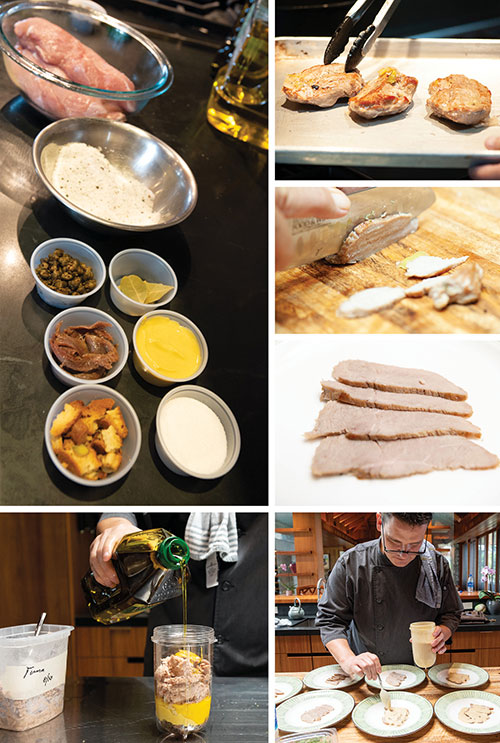 Along with the Saunders and Roger’s wife, Lynn, today’s crew includes Taverna partner Chris Kaiwi, chef Gene Pike, and Maui Nō Ka ‘Oi’s Diane Woodburn, Michael Haynes, and Cathy Westerberg. We gather around as Roger tells us he marinated the beef in wine and mirepoix (chopped and sautéed vegetables) for twenty-four hours, then drained the liquid from the marinade. “We’ll bring it to a simmer slowly so the protein will coagulate and we can skim it off.” Smoke rises as he sears three short ribs in a hot sauté pan coated lightly with olive oil. A nice fond develops as they brown. After discarding the foam from the simmering marinade, he deglazes the pan with a little of the wine marinade and pours it over the beef, along with the aromatics and some beef stock. Then into the oven it goes, with a handful of fresh herbs, to cook for two hours.

Diane and Michael are busily chopping parsley, shallots and garlic, while Cathy slices beefsteak tomatoes for the pomodoro sauce. Roger keeps a watchful eye on his understudies as he sears veal for the vitello tonnato. He places a fistful of chunky mirepoix into the pan to infuse the veal with more flavor. “Normally, we would let the veal chill in the stock,” he explains, “but since we are pressed for time, we’ll cool the veal quickly, then slice it thin.”

“Who wants to prep the octopus?” Gene asks. “Uh, I guess I can do it,” Michael says hesitantly. “I’ve never done this before and I’ve never tried eating it either,” he admits to no one in particular. To which I think, I’ll gladly eat his portion! I tell Michael, “It tastes like scallops, without the sweetness.” The knife slides easily through the cooked octopus. “Roger, how did you get it so tender?” asks Diane.

“It’s a trick I learned: put a cork in the water when you cook it. It tenderizes the meat,” says Roger.

Gene takes the skewered cephalopod and grills it over a hot fire, the delicious aroma rising in the smoke. “Charring it will add a bit of texture and another dimension of flavor.”

Cathy preps the polenta Roger cooked yesterday, breaking it apart per his directions. “We’re going for a rustic look in this dinner,” he tells her, adding that after she has finished, “We’ll put some butter and grated Parmesan over the top [and] bake it in the oven till golden. Very easy.”