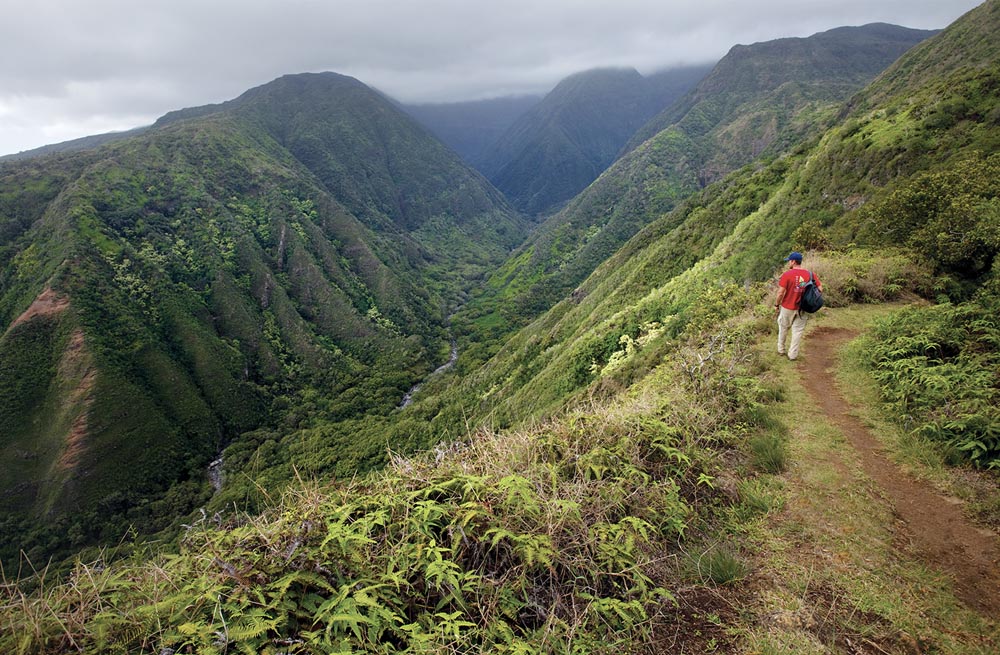 It’s the kind of Maui morning that’s ideal for a hike: sun attempting to burst through cottony clouds, trade winds riffling tall grasses and treetops — perfect, when you’re about to hike two-and-a-half miles, gaining 1,563 feet of elevation, in pursuit of a panorama.

Waihee Ridge Trail isn’t well known, but it’s one of the island’s best, an opportunity to get off the beaten path and rack up some serious aerobic exercise, while enjoying breathtaking scenery. Part of the State of Hawaii’s Na Ala Hele trail system, it’s well maintained and well marked. Today, nineteen of us are on an interpretive hike into this vital forest reserve, led by staff from the West Maui Mountains Watershed Partnership.

“The first 200 yards, you’ll ask yourself, ‘Why did I come on this hike?’” says John Comcowich, the partnership’s field crew supervisor. “After that, you’ll know why.” John is referring to the notorious steep cement driveway leading to the Waihee Ridge trailhead. It’s lined with grasses and an abundance of brilliant purple vervain, a wildflower that tastes like mushrooms. Hawaiians called the plant owi, and used it to treat cuts and bruises.

Also on the hike is Laura Berthold from the Maui Forest Bird Recovery Project. She says the birds we hear as we trudge uphill are Japanese bush-warblers — little gray inhabitants of the forest understory, identified by their chirpy “pichu, pichu, pichu.”

Hamstrings screaming, hearts pounding, we veer off the driveway onto the trail and head towards a dense canopy of trees and our first glimpse of Makamakaole Falls, a 270-foot cascade. A metal gate leads into the forest reserve. Beneath the stately Norfolk pines, sturdy eucalyptus, and Queensland maple with its luminous leaves, the air is cool and moist. Recent rains have muddied the trail; we gingerly negotiate an intricate web of roots and rocks, while branches above us creak and moan in the wind.

What we know as “the West Maui Mountains” Hawaiians called Kahalawai, or “House of Water.” These 50,000 acres of native forest and vegetation create an irreplaceable watershed, recharging underground aquifers and providing clean water for streams. In 1998, conservationists and landowners established the West Maui Watershed Partnership to protect it from invasive species, like the wild pigs that Chris Brosius, the partnership’s coordinator, compares to “rototillers.” In one day, a single pig can root up a piece of land the size of a football field, creating gaps in the soil where aggressive plants can take hold and thrive. “Our job,” says Brosius, “is to eradicate invasive species (through) herbicides and hand pulling, and to remove feral animals from pristine areas and fence them out.” And do so with a team of ten people.

As we progress into the forest, it becomes more humid, and we glisten with sweat. Thickets of native uluhe surround the trail. John tells us this fern can grow up to seven feet, and plays an important role in the watershed by capturing moisture from clouds, even if it’s not raining. I can feel their steaminess as I pass by.

We arrive at a ridgeline where the native forest begins. “Endemic plants are essential to the preservation of Hawaiian culture,” says Chris. “They’re used to make lei, dye tapa cloth, and for hula and other practices.” The immense Waihee Gorge, once home to the largest taro field on the island, is to our left, and I can hear Waihee Stream coursing far below. To the right are the deep blue ocean and majestic Makamakaole Gulch. Chris tells us this ridge receives about 120 inches of rain each year, and that some 80 percent of the island’s tap water begins in Kahalawai. “Right above us is Puu Kukui, the highest peak, which receives upwards of 365 inches of rain per year, rivaling the wettest spots on Earth.” 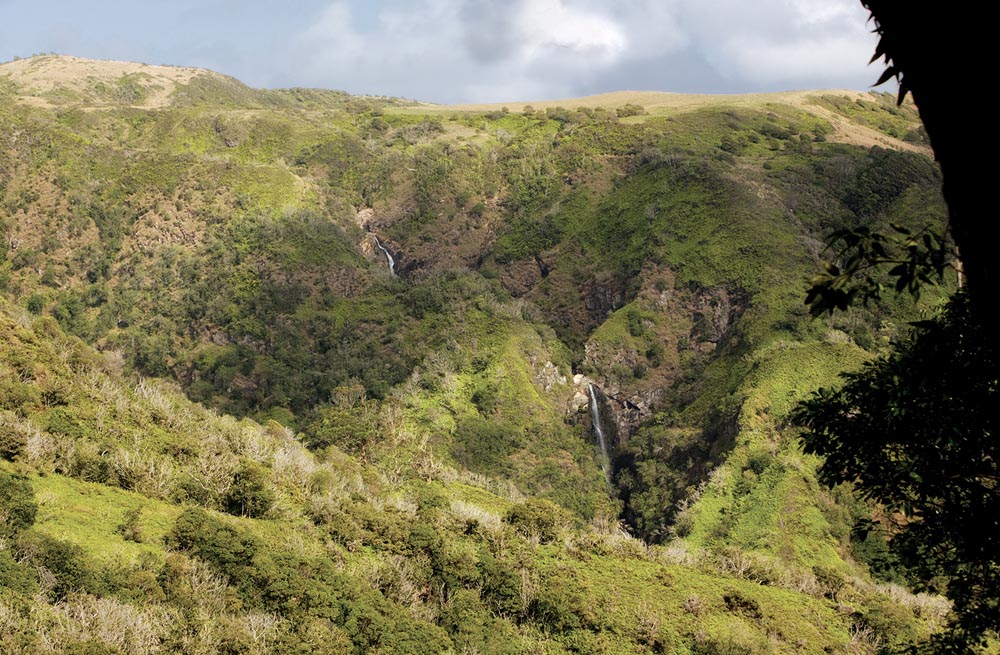 Waihee belonged to Kaahumanu, the favorite wife of Kamehameha the Great, and was designated a place of refuge. Those who reached it, having been convicted of a crime, would be spared punishment or death.

Near mile marker 1.0 we go through a wooden gate erected to keep out feral ungulates, and suddenly the air is filled with a pungent, fruity odor. Chris points out the source: a huge stand of strawberry guava. One of the most invasive species in the Hawaiian Islands, it has claimed thousands of acres on Maui in the last 200 years. “It uses much more water than native species, and prohibits the growth of forest understory, (hampering its ability to) prevent rainwater runoff and erosion.” He says feral pigs play a major role in the dispersal of strawberry guava seeds. A single pig can scatter an astounding eight million seeds during the peak fruiting seasons of spring and summer.

Now begins a series of exposed, windy switchbacks, as does some intense huffing and puffing. But the higher we ascend, the more spectacular is the view. Tall, green ti plants sway as if already adorning the hips of graceful hula dancers, and we encounter red ohia lehua, the Islands’ most common native tree, with brilliant flower tufts resembling bottlebrush. Ohia is the name of the tree; lehua is the blossom. Both are steeped in Hawaiian mythology. Indigenous amau tree ferns dot the scrubby landscape, their fronds emerging like umbrella spokes from the trunk.

Up ahead, hiker “Jungle John” Korpi calls out “1.5! 1.5!” Knowing there’s only one mile to go does wonders for one’s stamina, and we forge ahead to a row of paperbark trees, a member of the Australian genus melaleuca in the myrtle family. Their peeling bark is composed of fibrous, tissue-paper-like layers in muted cream, pink, orange, and brown. Nearby, delicate wild Hawaiian bamboo orchids display white-and-maroon petals, and vivid purple lips. 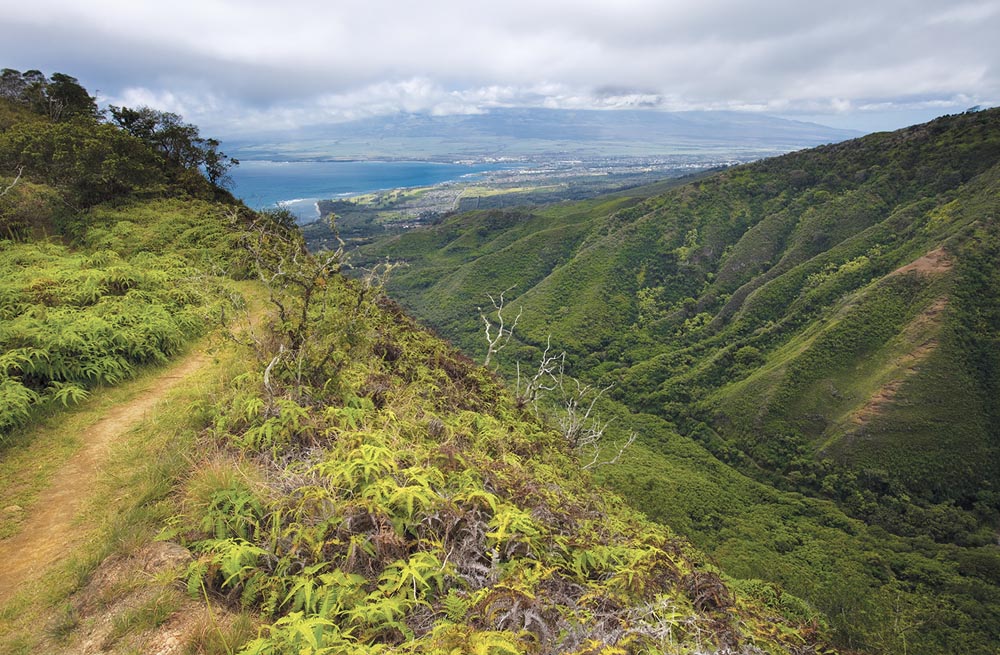 The next trail segment is boggy with a slight downhill slope. I welcome the opportunity to catch my breath before we begin the next ascent. Ornithologist Laura calls our attention to the high-pitched cheeping of the Japanese White-eye, named for the white ring around its eye on an otherwise solid bright green head. “They have the same foraging habits as apapane and amakihi,” she says, “so they compete with these native birds for limited food resources.”

Clouds spill across the green crevasses to our left, veiling them in mist. At mile marker 2.0, Molokai comes into view and, farther beyond, Oahu. Chris points out ohelo, a native shrub known for its edible red berries. When the berries are ripe, local residents gather them to make preserves and pie filling. I taste one and it’s bitter — these have a way to go before they’re ready for harvest.

As we continue towards trail’s end, it’s muddy and slippery, but one more short ridgeline takes us to 2,563-foot Lanilili (“Small Heaven”) Peak, where our prize awaits: a staggering 360-degree vista of lush mountains, shimmering Pacific filled with frothy whitecaps, fields of tall sugarcane in the central isthmus, and imposing Haleakala Mountain. I feel exhilarated as I take it all in; this is what makes conquering a ridge hike worth the wobbly legs and groaning knees.

As we take a well-deserved rest, I unwrap the turkey sandwich I’ve packed and soon rediscover one of hiking’s greatest truths: a sandwich, even slightly squished, never tastes as good as it does when you’re on top of a mountain. “There’s no other place like this in Kahalawai,” says Chris. When a Monarch-like butterfly floats by, he tells us it’s a pulelehua, or Kamehameha, butterfly — one of only two species native to Hawaii. In 2009, it was named the official state insect. Chris also spots a rare orange ohia lehua residing tranquilly at the summit. 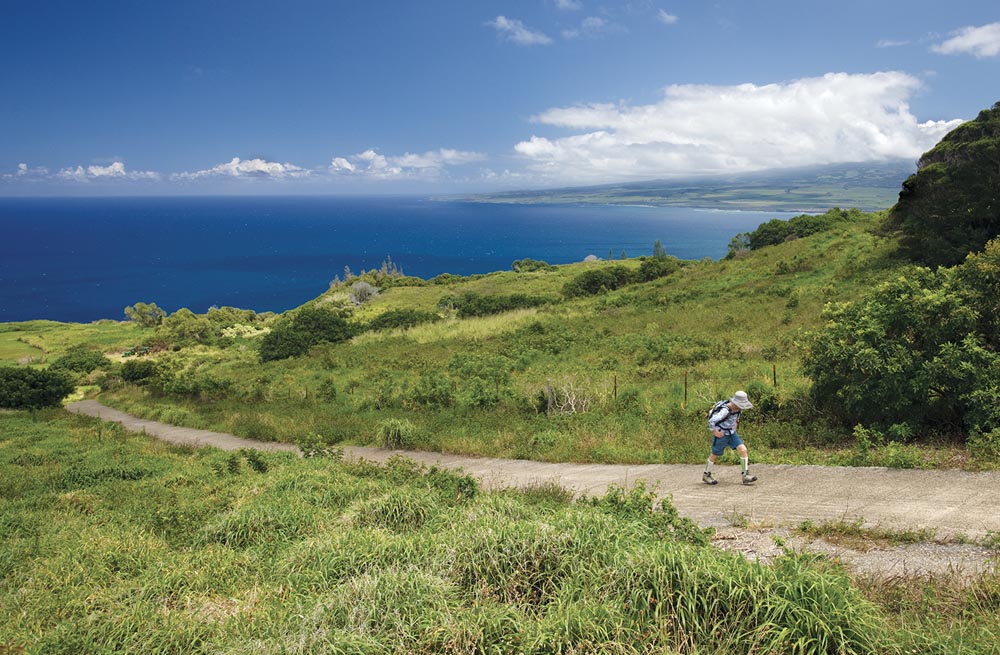 Descending Waihee Ridge isn’t without challenges either — it’s easy to become distracted by the views and lose your footing. But not being breathless gives me an opportunity to notice things I missed on the ascent: the beauty of red ohia blossoms, prominent against a backdrop of deep green vegetation and cobalt sea; the sun peeking through clouds, illuminating massive fingers of the ridge, a bank of gray-and-white cumulous clouds punctuating the ocean, and damp, earthy smells. We pass several hikers just starting out, and their flushed faces confirm it’s wise to get an early start on this trail.

Chris intends to start a volunteer program to help eradicate invasive species, and he’s been taking photos on our descent of several areas in need of attention. He wants to preserve Waihee Ridge Trail as an interpretive experience so more people have an opportunity to develop a connection with Kahalawai and understand the resources it takes to care for it. “I hope today we’ve shown you the value of protecting this watershed,” he says. “It would be impossible to replace it.”