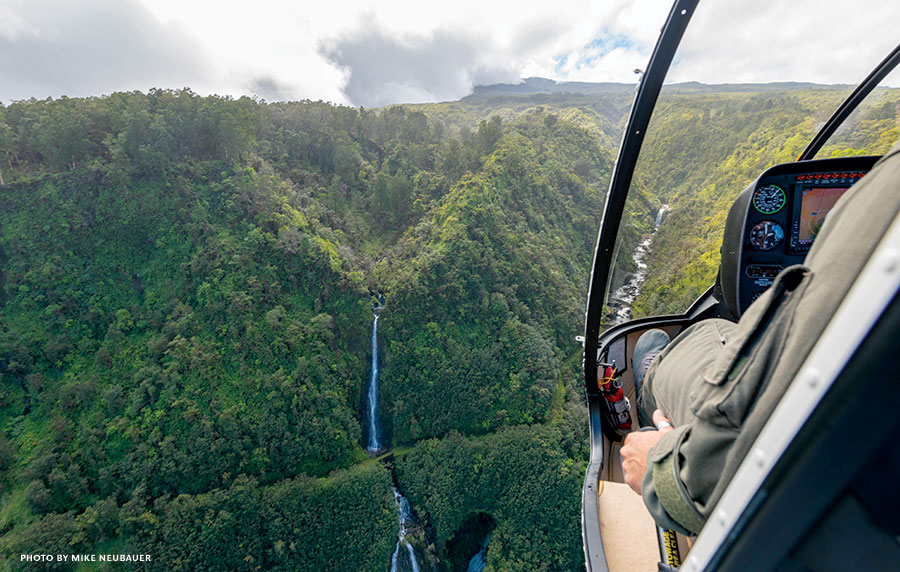 The first time I experienced the magic of helicopter flying was in 1995, when I tagged along with my boyfriend, a field biologist, to his camp high on the wild slopes of Haleakalā. As we buckled ourselves into the sturdy working helicopter, he leaned over and told the pilot, “Take it easy; it’s her first time.” I assumed we’d taxi like a plane and gradually climb into the blue Maui sky. Instead, we lifted right up, alien-abduction-style, then shot off over the clouds to the high mountain slopes: a turbocharged hummingbird. Ephemeral wisps of cloud swirled around the chopper skids. The doors were off, and I leaned out a bit when we descended for landing, the ground rising to meet us and the skids coming to rest gently on the soggy meadow like a kiss.

In the years since, I’ve shamelessly begged and bribed rides with friends and colleagues working in remote locations that required helicopters to access. While riding along on a search for a lost monk seal, I accidentally flew to Moloka‘i because the pilot was running out of fuel. I once flew to a glacier in Alaska and had lunch on the ice, the trip courtesy of a tour guide. I rode along with a filmmaker who was simulating the experience of being a golf ball; we looped over a Mākena golf course until I was as green as the greens, but happy even to be dizzy in the air.

There are two common denominators to all of these flights:

I am thrilled to pieces every time.

I always want to go back in time and learn to be a pilot.