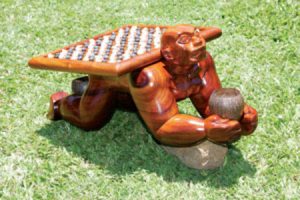 In 1973, renowned Hawaiian artist Herb Kane suggested to a roomful of people at a Maui conference that a double-hulled voyaging canoe, or wa‘a kaulua, be built with features of ancient Polynesian design and performance.

The crowd listened in silence as Kane explained that the canoe depicted in his vibrant paintings must have been at the heart of Polynesian culture; for without it, there would be no Polynesians. “Cultural disintegration results when such an object and the arts and skills related to it are lost,” Kane said. “Bringing it back to reality could spark a cultural revival.”

From the darkened room, suddenly a voice boomed out. “I have a question!” A powerfully built man with a bushy black beard stood up. Sam Kaha‘i Ka‘ai began to speak in Hawaiian, the words traveling forcefully through the room. When he paused, the silence hung thickly.

Kane knew Ka‘ai by his reputation as an expert in Hawaiian arts and traditions, and he knew that a good word from the artist would make his visit to Maui a success. Kane shouted back, “Speak English!”

With all eyes on him, Ka‘ai replied, “I see two ki‘i [carved images of gods] on your canoe. Do they live? I come from a canoe-making family. If they do not live, I will carve them for you.”

Kane asked Ka‘ai to pule (pray) and dream about the images, and let the ancestral spirits set the course of his work. Out of Ka‘ai’s dreams came the two ki‘i that he carved to guide the first Hokule‘a sailing canoe in her epic voyage from O‘ahu to Tahiti in 1976. The voyage reaffirmed ancient navigational methods and opened a channel through which Hawaiian energy could flow in a movement now termed the Hawaiian Renaissance.

From within that phenomenon, Sam Ka‘ai  emerged as a powerful force. As a master woodcarver and artist, as a Hawaiian cultural guide, as a leader in the warrior movement, as a mentor for Native Hawaiians who had lost sight of their essential history—Ka‘ai has always challenged others to join him in a deep and introspective look at what makes a “Hawaiian.”

That challenge comes to the forefront this winter, when a profound exhibit of Ka‘ai’s life and work opens at the Maui Arts & Cultural Center. Hawaiians, residents and visitors alike will have a chance to experience firsthand “The Lifework and Collective Song of Sam Kaha‘i Ka‘ai, Naue Ka Honua (the earth shakes)—E ala mai ia Kihanuilulumoku (Kihanuilulumoku awakens).”

According to Carolyn Kuali‘i of Kua‘aina Associates, which is coordinating the exhibit, it will be one of the most important ways in which “a true son of Maui” has been featured at the MACC. “The awakening represents the growing awareness of traditional Hawaiian thought,” Kuali‘i says. “The exhibit will be a historical journey of Sam’s life, but the Hawaiian awakening has gone beyond the Renaissance into the retrieval of Hawaiian articles and into Hawaiian philosophy.”

The exhibit will also include many Maori artifacts from the artist’s extensive travels in New Zealand. Awarded a Fulbright Scholarship in 1988, Ka‘ai studied as a guest of the New Zealand Maori Arts South Pacific Council, an experience that fostered a deep bond for him with the Maori culture and people.

“Sam brought the language of the conch back to us and left behind baskets of Hawaiian knowledge that enriched the ancient ties between the Hawaiian and Maori people,” says Darcy Nicholas, a Maori painter, sculptor and writer. “He will always be loved in this country by the people whose lives he touched.”

Ka‘ai is certainly not a man anyone would forget. His bushy black beard is now snowy white, but his voice can still bring a room to silence. Through wire-rimmed spectacles, his dark eyes flash with fierce energy as he talks about his people’s proud past. The unfriendly accompaniments of age—diabetes, arthritis, and failing eyesight—have not forgotten Ka‘ai, but they are unimportant in the play of his hands across space as he describes the wind in the Hokule‘a’s sails.

A masterful storyteller, he slides from fluent Hawaiian into Maori, from pidgin into “proper” English. His voice rises tumultuously against the ‘70s Cubist movement and homogenization of art; then softens into a whisper, describing the beauty of famed hula dancer ‘Iolani Luahine. His words flow in poetic lines, rich with layers of history, meaning, and metaphor.

“For me, Sam and his culture are inseparable,” says Maori artist Lyonel Grant. “He has his artifacts all around him, and once the conversation heads to anything Maori or Polynesian, there is no stopping him . . . that inexhaustible current of knowledge flows freely and uninhibited, so that the listener has to have a base knowledge of such things to keep pace with his exuberance. Quite often the conversation may break, and the next thing you hear is the sound of a ceremonial drum or delicate flute . . . so it’s not just a conversation from which much can be learned, but a performance!”

Music and artistic expression were integral to Ka‘ai’s childhood. Born in Hana in 1938, he grew up in rural Kaupo and became adept at working with wood under the guidance of his uncle, woodcarver Lehau Ka‘aihui. After graduating from McKinley High School on O‘ahu, Ka‘ai accepted an art scholarship at the Honolulu Academy of Arts, where he added sculpting, painting and design to his cache of knowledge.

His reputation as an artist grew as he created some his most notable works, including the image reproductions that once stood at Hale o Keawe at Pu‘uhonua o Honaunau (City of Refuge) on the Big Island, and the image carvings of Maui Na Huki La and Lono Kahili Mana at Haleakala National Park. From the creation of his ki‘i for the Hokule‘a evolved his lifelong dedication to the Polynesian Voyaging Society. In 1978, ‘80 and ‘85, Ka‘ai sailed as a crewmember aboard the Hokule‘a. The intricate fishhooks crafted from whalebone with which he fished during those voyages will be part of the December exhibit.

Also on display will be spears fashioned for use under Ka‘ai’s direction during the 1991 bicentennial celebration of the Pu‘ukohola Heiau on the Big Island. Commemorating Hawai‘i’s unique cultural heritage, Ho‘oku‘ikahi (unification) resulted in “the restoration of pride in the 2,000-plus people (primarily Hawaiian) who participated in the two-day event,” said Daniel K. Kawaiaea, Jr., National Park Service superintendent. “It was only through Sam’s vision and urging that [we were] able to present such a traditional Hawaiian event.”

Along with teaching weaponry and warfare, Ka‘ai re-introduced Hawaiian practices such as the formal ‘awa (kava) ceremony to honor distinguished guests. He has been called upon countless times to conduct ‘awa ceremonies for significant occasions; most notably, the ‘Onipa‘a gathering in 1993 marking the 100th anniversary of the overthrow of the Hawaiian Kingdom. The ‘awa bowl from this event will also be part of the exhibit.

The only downside of such an abundance of artifacts is there could not possibly be enough time to hear the stories intrinsic in each and every piece. Yet for those eager to listen, stories will be told during the community panels set to take place in conjunction with the exhibit. Participants will include Ka‘ai’s peers—prominent cultural practitioners, artists, and sculptors.

He has been described as a “living treasure” of Hawai‘i; as a master artist; as a generous teacher; as “the most civilized man I know,” by Herb Kane. To some, he is the “great mo‘o (lizard) that bites everyone”—but who inspires effort. To Kyle Nakanilua, a student of Ka‘ai’s since 1991, he provides “a medium for the old whisper to manifest in today.”

Ka‘ai, tells the story of an albatross that soared for five days in the updraft of the Hokule‘a. “There is an ancient murmur, always calling, always watching. Here is this thing from heaven hovering over the lower dimension, and we are allowed to be beneath it for a moment. Yet already the sail has changed, the moment has ended, the song has ended. If we don’t remember, it disappears.” Ha ia mai ana kapuana—this is my song. For Sam Kaha‘i Ka‘ai, it’s the moment to tell his story for the ages.