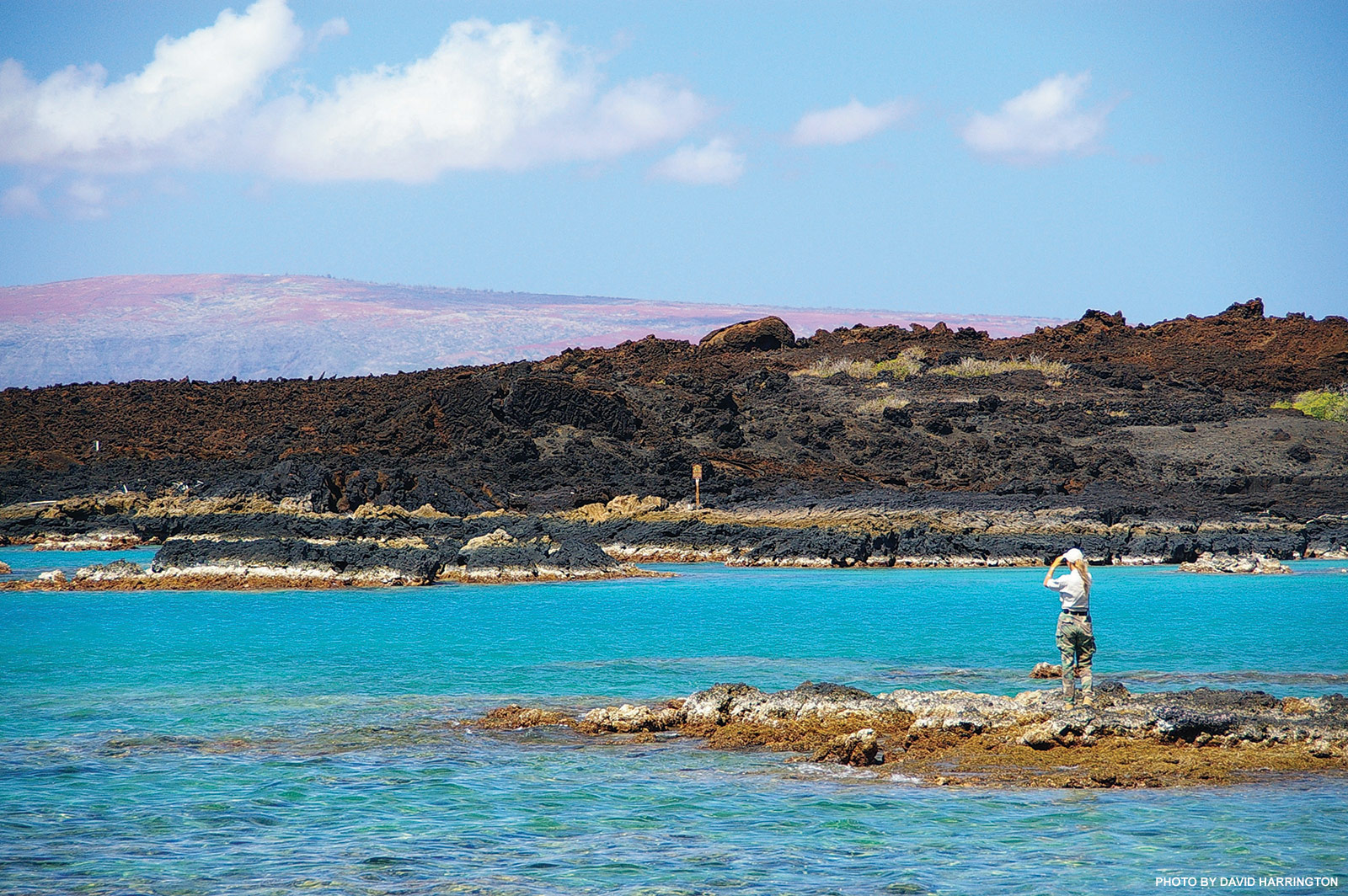 When you first roll past the weathered wooden sign, so reassuringly old school, that announces the beginning of the ‘Ahihi-Kina‘u Natural Area Reserve in South Maui, you meet an astonishing expanse (1,200 acres above water and 800 below) of rumpled, jagged ‘a‘a lava. From the air, it looks like a giant, patchy brown mitten reaching from Haleakala volcano westward into the sea, grasping for the island of Kaho‘olawe. The road bumps along for two miles and then dead-ends in the tradewind-battered parking lot at La Perouse Bay, which is just outside the boundaries of the reserve. You may think: Wait, this looks like Mars; why is this a protected reserve? And then you’ll wonder: Now that I’m here, what can I do?

I was once a ranger here. I know it about as well as anyone can, other than the infamous Ranger Joe, who has probably walked more of its jumbled, craggy surface than any restless human alive. I can tell you, because I have counted them, that roughly 700 to 1,000 people a day come to this last wild, windy, remote piece of the Maui coastline. That sounds like a lot, and in a lot of ways it is, but most of those people come between 10 a.m. and 2 p.m., and outside of those hours you can find yourself alone with the wind and sea along the raw coastline, with the humpback whales and green sea turtles, and even the occasional Steven Tyler sighting (he’s a resident of the neighborhood and a sometime volunteer). I spent many winter evenings there while a humpback whale duo, mom and calf, tucked up next to the shoreline as close as depth allowed. The deep exhalations of the mother whale would carry to me as I sat at the water’s edge, watching the stars come out. Because boats are not allowed in reserve waters, this mother and calf were able to rest the night through, unmolested by the noise of engines and the danger of props. 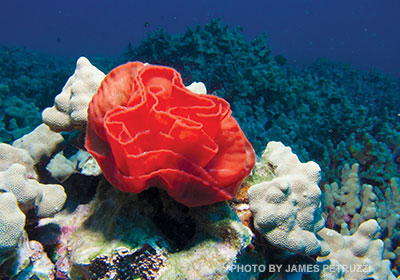 ‘Ahihi-Kina‘u is a bit of an oddity. All other state natural area reserves in Hawai‘i are land only, and managed by the state’s Division of Forestry. Ocean reserves are only ocean, and are managed by the Division of Aquatic Resources. The Natural Area Reserves Commission established ‘Ahihi in 1973 as the very first natural area reserve in Hawai‘i, and it remains the only reserve, of a current nineteen, that encompasses both land and sea. This may have been accidentally visionary, as science today is clear that what happens on the land eventually affects the sea, and vice versa, a concept Hawaiians have always maintained.

When you enter the reserve, the tiny road hugs shallow and popular Waiala Cove, equally teeming with humans and fish. Pass it and a tall stone wall to find the large gravel public parking lot on your right. Park, then walk to the ocean along a wide and uneven trail that leads left. You will shortly find yourself standing on a black pebble beach. You have reached Kanahena Cove on ‘Ahihi Bay, a beach local surfers long ago christened “Dumps” for the old village dump once found near what is now the parking lot. The shoulder of lava to your left, south, which buffers this bay from most swells and currents, is called Cape Kina‘u. Most days the sea here lies at your feet like a blue-green lake, but there can be impressive waves whenever storms come from the west. Drop your things, put on your mask and snorkel, and follow the small pocket of black sand into the water. And be amazed. This bay has been legally protected from the taking of any marine animal for over forty years. It is one of the few areas on the Maui coast where coral reefs are not declining, but are in fact increasing. Common and uncommon fishes are found here, as are five of the state’s federally protected species: humpback whales, Hawaiian green sea turtles, hawksbill sea turtles, spinner dolphins, and the exceptionally rare and precious Hawaiian monk seal. 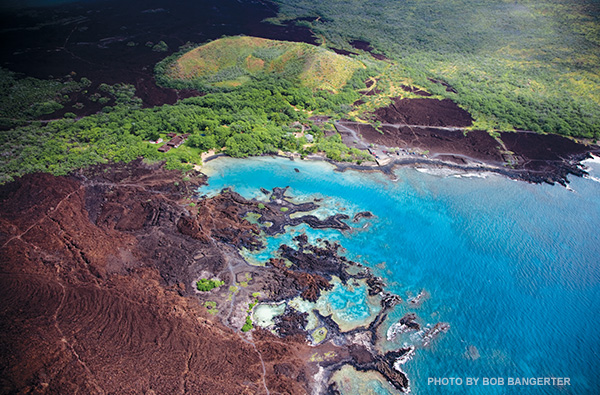 Should you pass the Dumps parking lot and then pause in the road halfway along its two-mile traverse through the reserve, you will see the bunched and scrunched lava field extend on both sides of you, both upslope to the cinder cone (Kalua o Lapa) that in the 1500s was the source of the flow, and to the sea, which you will barely be able to detect out on the far margins. You may be shocked to know that tucked into those forbidding upheavals and slabs are wetlands protecting flocks of native Hawaiian stilts, with their tuxedo-like plumage and long, pink legs. Those wetlands also shelter migrant birds in their seasons, all of them quietly in hiding on great jewels of brackish water, visible to us only from planes and helicopters. And scattered along the seaward edge of this great lava mitten are anchialine pools, small ponds that rise and fall with the sea but are not directly connected to it, fresh and salt water percolating into them through the rock. The pools are home to endemic Hawaiian shrimp — the rarest in the world — tiny things that vanish into the cracks of the rock when the water level falls. Only Maui and the Big Island cradle these anchialine pools in the arms of their newest lava flows. 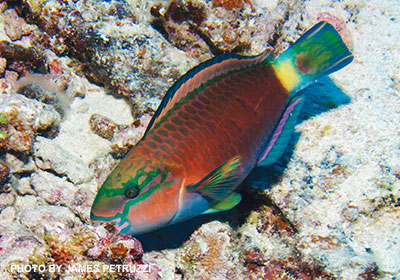 Protecting these delicate, imperiled ecosystems and the species that inhabit them is a major reason access to parts of ‘Ahihi-Kina‘u is restricted.

Here’s another: Long before ‘Ahihi was a reserve, it was a bombing range used for target practice during World War II. Exploded and unexploded ordnance, bits of planes, shells and casings, all manner of wartime fallout are scattered in the crags and crannies of the windblown lava field, and for that reason large land areas of the reserve have been closed to recreational use, for now. A popular trail used to lead to a feature far out on the coastline, called, informally, “the Fishbowl” (Mokuha). I walked that trail for years, before and during my employment there, and then one day Ranger Joe on his mountain-goat-like perambulations found an unexploded six-inch artillery shell about two feet to one side of the trail, and the US. Military Corps of Engineers came, cleared everyone out of the area, and blew it up. It was the first of many such findings.

Restricted access also protects a number of archeological sites. Long before the twentieth century, this area was a network of villages, including the fishing village of Maonakala, the extensive ruins of which are now protected by yellow ropes and caution signs just above the beach at ‘Ahihi Bay. Even from behind the ropes you can spot the bases of homesites, shrines, canoe sheds, so eloquent in their emptiness, and the smooth, waterworn stones of the beach set carefully into the rough and biting ‘a‘a lava to make an easy path for bare feet.

David Quisenberry is the reserve’s manager. “DQ” to nearly everyone, he’s a longtime local boy with a surfer’s blond, tousled hair and an easy manner. He and his crew, with the support of enforcement agents from the Division of Conservation and Resources Enforcement, do all they can to safeguard this gem in the Hawaiian crown of protected areas. Removal of nonnative plants, monitoring of native plants, and plans to build a fence to block highly destructive feral goats and nonnative deer are all part of the work here. The Division of Aquatic Resources helps monitor the area’s coral reef, and The Nature Conservancy is doing reef quality surveys.

Without community support, it still wouldn’t be enough. “Without volunteers, the reserve’s staff can’t adequately protect ‘Ahihi-Kina‘u,” says Quisenberry, “nor, with current funding, can staff be present fourteen hours a day, 365 days per year to handle the 250,000 people who annually visit the area. We would like to engage the community to help care for the reserve.”

Train as an official volunteer and you might find yourself educating the public about ocean access, safety, and the region’s history and culture. Service trips organized through Quisenberry generally focus on native plant restoration and nonnative plant removal for offenders like the horrid pickleweed, which grows like a bad-tempered water hedge, taking over entire ponds and trapping young birds in its tangles. Some dedicated community members plant indigenous flora with the Native Hawaiian Plant Society or remove marine debris along the rocky, windswept shores with the Surfrider Foundation. And it’s not just conservation groups that donate their time at ‘Ahihi-Kina‘u. So do corporate employees of firms like Boeing. 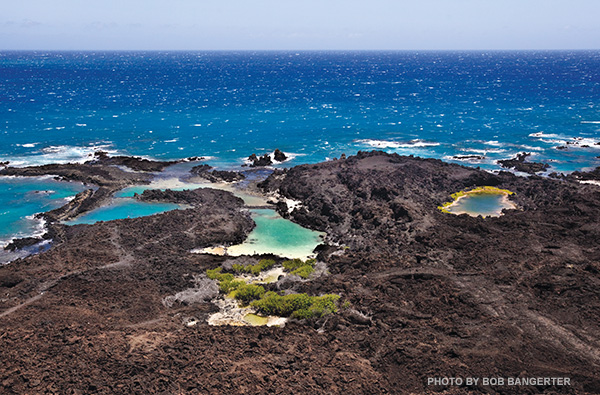 ‘Ahihi-Kina‘u, one of the last wild places and one of the first protected, holds its secrets close and waits, as it always has, for what the future brings, or takes. Some evening in winter, during whale season, walk out to the water’s edge at Dumps in the fading gold light. The lava field will deepen to a chocolaty brown and the stars will gradually arrive overhead. All over the reserve, the birds will be relaxing into their nooks in the wetlands, the tiny, tiny shrimp will be settling down in the anchialine pools, the dusty orange blossoms of the ‘ilima will be closing, and the stones of the archeological sites will begin to cool. Let your eyes rest on the sea, on the wide bay before you, and listen for that mother whale and her calf; listen for the wind that has scoured the summit of Kaho‘olawe. Listen to the sound of something older, larger than you, wilder than you. Listen to all of time, thrumming here.

For information on service trips, contact Reserve Manager David Quisenberry at 808-268-3239 or David.Quisenberry@hawaii.gov.

Prepare for the possibility of intense heat and wind, and keep in mind that ocean conditions are changeable. This is an undeveloped area and there is no water, limited cell phone coverage, and nothing to buy. Bring your own food, hats, and snorkel gear. Sunscreens have been shown to kill corals on contact; best if you bring a cover-up or rashguard to protect your skin. Leave your valuables at home or the hotel. You will not regret bringing a good fish ID book!