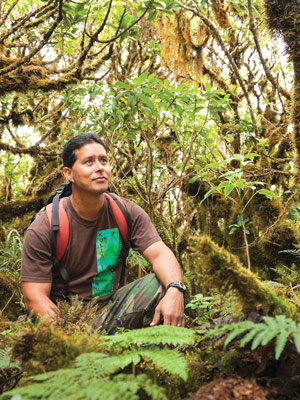 Clad in a stylish Sig Zane aloha shirt when I meet him, Pomaika‘i Kaniaupio-Crozier doesn’t look like an activist. But he sounds like one.

“Somebody has to speak up for the environment, because it doesn’t have lobbyists at the legislature,” he says passionately. “If I can help others to practice better stewardship, then I will always speak up.”

As conservation manager for Maui Land & Pineapple Company, Pomaika‘i has kuleana (responsibility) for the 8,600-acre Pu‘u Kukui Watershed Preserve and coastal conservation lands. Because he is native Hawaiian, his kuleana is even greater: to safeguard ancient wisdom and pass it on to the next generation.

As a teenager, he was asked to help some kupuna (elders) build a hale pili (traditional grass home) in Waipahu Cultural Garden on O‘ahu. “I thought I was the help,” he laughs. “I was really the student.”

Years later, Honolulu’s Bishop Museum selected Pomaika‘i to oversee reconstruction of Hawai‘i’s last remaining hale pili. Relocated to the museum from Miloli‘i Valley on Kaua‘i in 1902, the structure was already a century old. Because pili grass and the endemic hardwood tree uhiuhi are now so scarce, the builders had to search for or grow their materials. For Pomaika‘i, the experience underscored an urgent need to restore native habitat.

Pomaika‘i moved to Maui in 2004, taught at UH-Maui College and helped develop its Malama Ahupua‘a course — literally, caring for the land from the mountain to the sea. Later he worked for Maui Economic Opportunity’s Ke Kahua Project, teaching cultivation of native plants. He and wife Ekela raised their children in Hawaiian; the language, he says, “communicates a worldview that acknowledges the interdependence of life.”

Pomaika‘i’s expertise in ahupua‘a management led Maui Land & Pineapple to hire him to oversee its conservation lands. Pu‘u Kukui, the highest peak on West Maui, is a rare, pristine environment with an intact indigenous ecosystem.

“I am in awe every time I go up there,” says Pomaika‘i. “Everything is 100 percent Hawaiian — every plant, every insect, every bird.”

Pomaika‘i has welcomed some of the world’s preeminent researchers to Pu‘u Kukui. These encounters reveal the different orientation between indigenous and western minds.

“Western scientists see an individual Metrosiderous polymorpha. Hawaiian scientists sees ‘ohi‘a lehua. We observe the color of the liko [bud], the plant’s height and relationship to other plants, insects, birds, even the sun, moon, and stars. Hawaiians see the whole web of life. We understand that no plant or animal is more important than any other. You can’t save the whales if you don’t save the snails.”