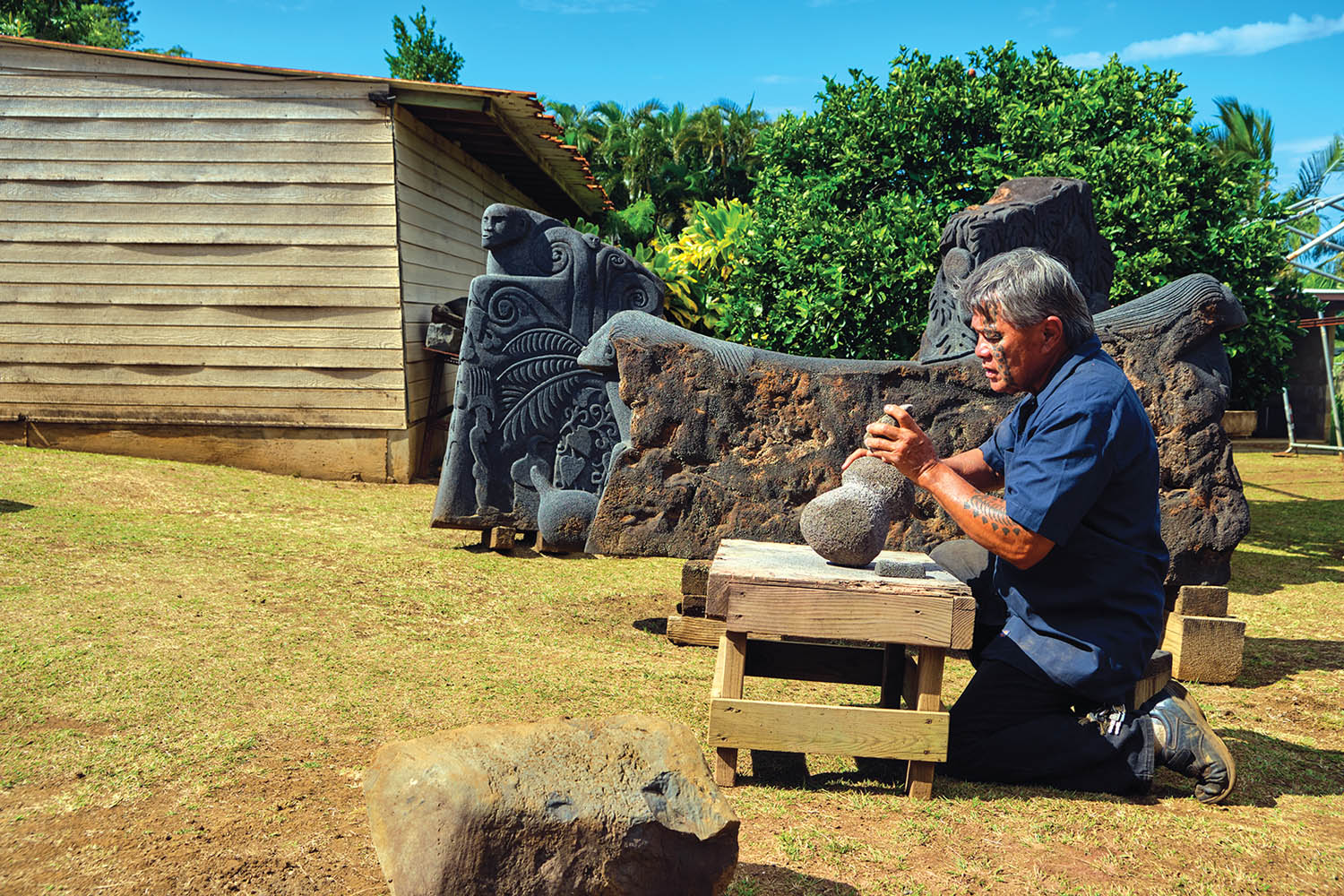 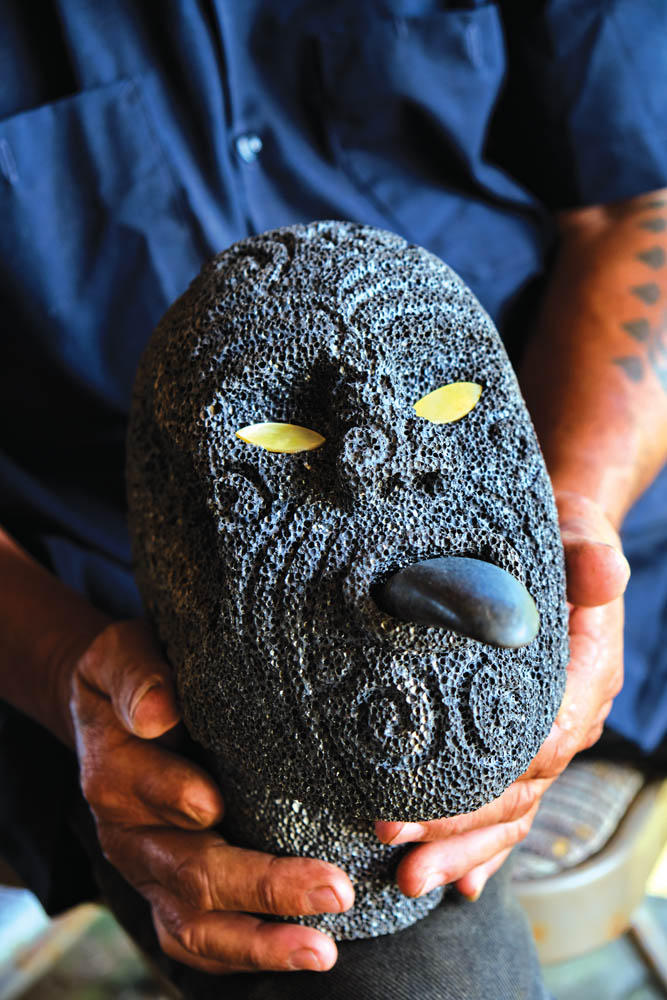 Hoaka Delos Reyes shows off a polished red stone with a knife-like edge. It’s an adze, orko‘i—the tool Hawaiians relied on for cutting and carving before Western ships brought metal to the Islands in the late 1700s. “Yousee how well made? Feel that edge. Precious,” he says. “The ko‘i is the physical manifestation of our ancient ancestors.”

Hoaka has dozens of ko‘i, ranging in color and size from hefty axe blades to slight tools for deft work. Some of these, like the one made with polished red stone, are artifacts he has collected over years, but many are his own creations—the tools of his trade. Hoaka is a kālai pōhaku (stone carver), one of the only surviving masters of this traditional Hawaiian art.

The artist’s humble home in Ha‘ikū could double as a museum; beautifully carved oil lamps, salt bowls, sling stones, and octopus lures beckon from tidy shelves. In the backyard, a statuary of Hawaiian gods and goddesses testifies to his skill. A deep, majestic bowl of water glitters beneath a breadfruit tree; Hoaka spent three years transforming a three-ton boulder into this sorcerer’s pool, which is guarded by sleek stone lizard with black eyes. Nearby sits the goddess Hi‘iaka, with waves of hair etched in gray. Two lithe lizards perch on either side of her, one with ivory shark’s teeth in its fearsome mouth. 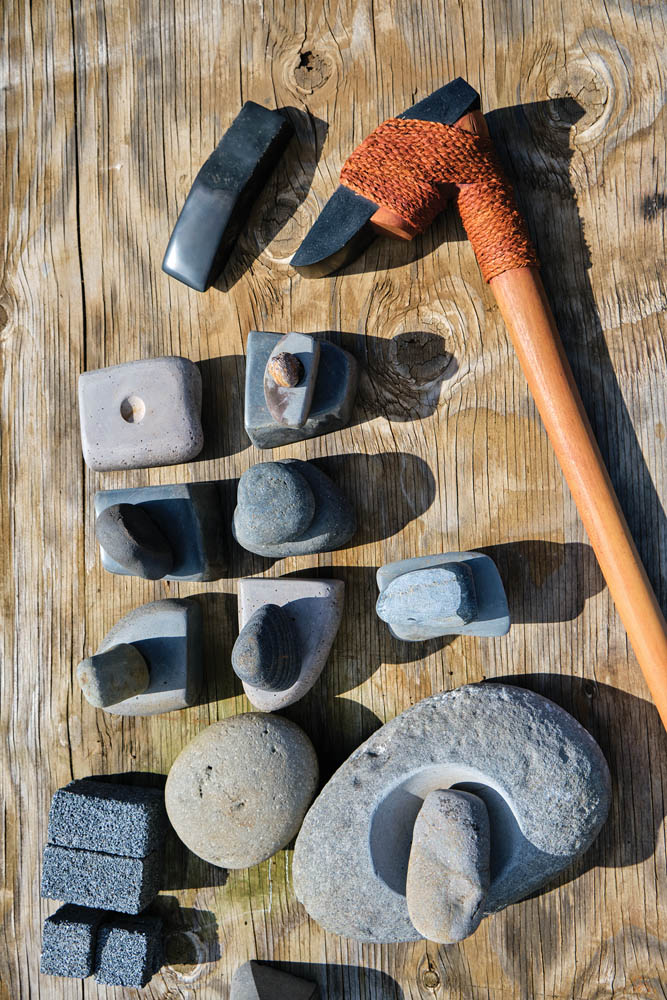 Hoaka’s stone-carving odyssey began three decades ago when his son came home from Waihe‘e Elementary with a seemingly simple request. The fourth-grader had been learning to pound poi and he asked his father to make him a stone pounder. No problem, dad said. After all, Hoaka had worked with rock most of his life, having built houses and hotels from the concrete slab up. But the boy’s request came with a challenge: He wanted a pounder made the traditional way, without modern tools.

Hoaka was stumped. His Native Hawaiian mother had taught him how to weave and fish, but not to carve. Once fundamental to daily life in Hawai‘i, the practice of carving stones, or pōhaku, had all but vanished. Hoaka asked local kūpuna (elders) if they remembered how Hawaiians shaped stone in days past. “None of the kūpuna, not even in Ke‘anae, knew,” he recalls. “No one did.” With each dead end, Hoaka’s curiosity deepened.

“The more I thought about it,” he says, “the more I wanted to know.” He recognized that his ancestors’ reliance on stones was fundamental. “We have a saying in Hawaiian: He ola pōhaku, he make pōhaku. Stone gives life, stone takes life.” Hoaka explains: “Stone gives life by cooking food in the imu [underground oven], building shelters, making medicines with mortar and pestle, and carving canoes. Stone takes life in warfare, whether with a sling stone, stone club, or spear.” 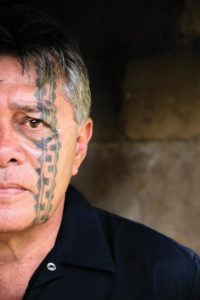 Hoaka consulted old texts and extended his search to other islands. Finally a neighbor called with a lead: a Japanese- Hawaiian carpenter on O‘ahu knew how to carve the old way. Hoaka sent a friend to the man’s house to ask if he would accept Hoaka as a student. The man said no. Hoaka sent his friend to ask again. The old man scowled and said, “What don’t you understand? No is no.” Hoaka let it rest. But after months of failing to find anyone else, he implored his friend to try a third time. Reluctantly, the friend went. The old man spied him in the driveway. “You again? You must really love your friend. Okay. Give him my number.”

Thus began Hoaka’s fifteen-year mentorship with George Fujinaga. In 1989 Hoaka spent a week with George learning the basics. “I had to go out and look for stones and research what kind of tools were made,” says Hoaka. Hawai‘i’s young volcanic landscape is composed almost entirely of basalt, which ranges from light and porous to dense and fine-grained. Hoaka learned to use the harder rock for tools—adzes, chisels, and anvils. From softer rock he fashioned other objects—the poi pounder for his son, game boards, and sacred statues.

Stonework requires strength and humility in equal measure. “When you are hard,” says Hoaka, “the stone will make you soft. It will resist and humble you. When you are soft, it will shape and mold you.” Hoaka learned to observe the grain and color of each pōhaku, and the sound it made as he chipped away. “The stone started to shape me, not the other way around.” What began to emerge was a gifted artist, someone capable of telling stories in stone.

Hoaka kept challenging himself with increasingly larger pieces, graduating from three-pound stones to thirty-pounders, three hundred-pounders, and even three thousand-pounders.

“How do stones evolve?” asks Hoaka. “Kīlauea keeps erupting, keeps making more stones. Out of darkness, into light. It bursts forth and creates land.”

George often talked about a particular type of stone that he had never been able to find: extremely dense, hard, and shiny. “For months and months I go looking,” says Hoaka, “on the coastline, in streams— and one day I found it. It was a blessing.” Eager to share his discovery, he flew to

O‘ahu, drove to his teacher’s house and pulled the dark stone out of a bag. “He looks at it and starts crying,” says Hoaka. “He calls his wife and says, ‘Look, look! He found the stone. The stone has revealed itself to him.’ And he says to me, ‘From this day forward I no longer can teach you.’” Hoaka told his teacher not to say such things and promised to come and chip stones outside of his house. Not long after,  Hoaka received a two a.m. phone call from George’s wife. Her husband was gone. “Before he passed,” she said, “he told me to tell you that he had been waiting for you all his life.”

During his apprenticeship with George, Hoaka learned something about his own genealogy. “Finally someone is assuming the kuleana [responsibility],” his aunties said during a family dinner. “What kuleana?” Hoaka asked. They reminded him that his great-great-grandmother’s name was Mauna Kea: “It’s that holy mountain that the stones come from. There’s an adze quarry there called Keanakāko‘i. Those are our ancestral lands.”

Keanakāko‘i is one of the largest, highest adze quarries in he world. It spreads across seven miles just below the 13,800-foot summit of Mauna Kea. For centuries, Hawaiians traveled up the wind-bitten mountain, carrying food and water to sustain themselves while they turned raw rock into tools. The remains of workshops where kālai pōhaku labored, accumulating tons of flake at their feet, are scattered across the landscape.

Hoaka visited Keanakāko‘i once. At first, security guards at the summit told him he couldn’t go to the quarry. “But there was a Hawaiian man there, an old, old man. He looked at me and said, ‘What you goin’ to do?’ I said, ‘Make my prayers for my family. I need to go there to honor them.’ After Hoaka revealed his family name, the man volunteered to personally escort him.

At 72, Hoaka still hefts hundred- pound rocks into his house and spends hours hammer- ing away at the sheer slabs. He teaches carving workshops and contributes sculpture to fine art collections around the world. He hopes to one day create ko‘i from each of the main Hawaiian Islands. The project would require access to historic quarries—not easy to get. Government agencies regard quarries as archaeological sites rather than living cultural resources. Hoaka wants to see that shift. Hula practitioners, canoe carvers, and fishermen all have legal access to the materials they need for their traditions; he seeks the same for stone carvers. Plus, he feels a filial responsibility for Mauna Kea and the other quarry sites.

“I am connected to all of the quarries and all of the mountains of stone,” he says. “I am the navigator of stones, the priest of many places from heiau [temples] to fishponds, from taro patches to the king’s trails, the pathways with the white stones placed so you can see your way at night.”

“Stone is alive for me,” says Hoaka. “It has an energy. Stone is important: what kind of stone, how you use it, what you make with it. By doing the work, one learns.”