*UPDATE* This Maui activity for kids is now closed.

It’s 11 a.m. on a clear Upcountry day, and I’m white-knuckling my handlebars as I navigate the corkscrew berms at Bike Park Maui. Just ahead is Molly Brooke, who moments earlier assured me that she’s “a really gentle guide.”

You see, my last mountain-biking trip bruised more than just my confidence. By the day’s end, I counted thirteen crashes and enough scrapes to warrant a Costco-sized box of bandages. Now, here I am back on two wheels.

As we pedal through the eighty-acre bike park just below Makawao town, Molly prepares me for what’s ahead: “Slow it down, slow it down. . . . It’s a bit slick,” she warns as we approach a muddy downhill section.

Lucky for me, Molly knows every angle of the park, which she runs with her husband, Paul Turner. The couple opened Bike Park Maui in June 2014, and have been a fixture within Maui’s mountain-biking scene ever since.

Mention the name Paul Turner to any serious mountain biker, and you’ll likely get a history lesson spanning the last three decades of the biking industry. Words like “pioneer” or “game changer” will flow freely, and there’s a solid chance that the person has owned a piece of equipment that Turner developed.

Paul is a serial entrepreneur best known for starting the bicycle-suspension company RockShox with partner Steve Simmons in 1989. Back then, mountain bikes were a synthesis of road and cruiser bikes, and none of them incorporated suspension technology. RockShox forever changed the industry, enabling mountain bikers to ride harder and jump higher.

“These days, I don’t think you can buy a mountain bike without suspension,” says Paul, who grew up racing dirt bikes and was later hired by Honda’s factory motocross team. He applied his knowledge of motorcycle suspension to design a front suspension fork for a mountain bike. But this new technology wasn’t initially an easy sell. 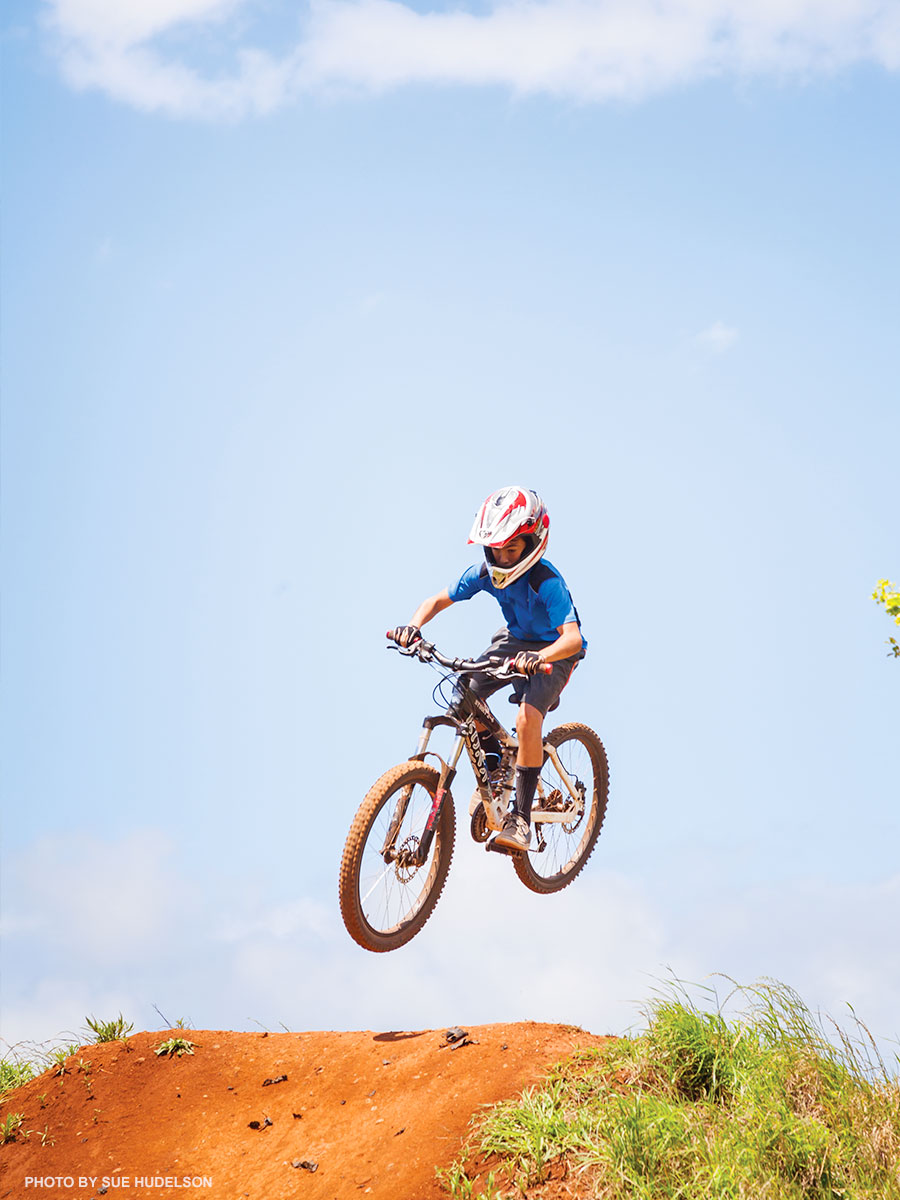 He says, “There were magazine articles explaining why suspension wouldn’t work for a bicycle. Many old-school cyclists were saying it was nonsense, but there were other people like me, who came from motorcycles, that said, ‘I have to have it.’”

Paul began showing his suspension fork to well-known riders, including his future wife.

“I got made fun of,” recalls Molly, a competitive racer at the time. “People would say ‘Oh, you don’t need that.’ My response was, ‘You’re right, but if you try it, you’re going to love it and never go back.’”

Within two years, suspension mountain bikes were a common sight on the trails. Paul eventually sold RockShox, but thanks to his innovations, riders were pushing themselves to the limit and landing crazier tricks than ever. 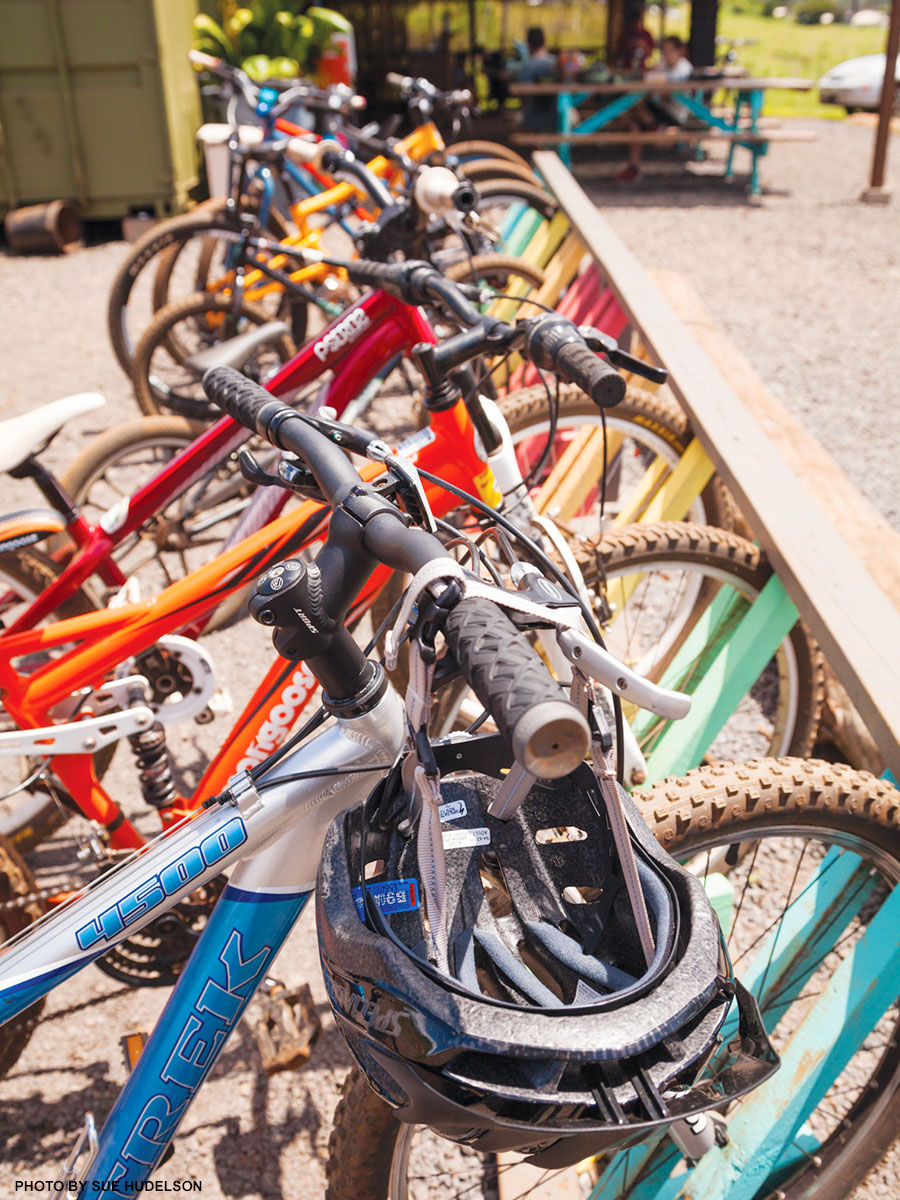 Today Paul and Molly have largely left their hardcore biking ways in the dust. They moved from Colorado to Maui in 2008, trading in their boutique Maverick bike business in Boulder for Maui’s laidback lifestyle. They later purchased the Upcountry property where Bike Park Maui sits, building their home just off one of the riding paths.

“We didn’t immediately think about opening a bike park; we just built some trails for ourselves,” says Paul, adding that, “People often ask us how it feels having people ride through your yard — they think it’s kind of bizarre. . . .We feel the property is really special, but it’s more rewarding if you share it.”

With that in mind, I return a few weeks later with my boyfriend, Brad, and nine-year-old niece La Hikina. On any given weekend, the trails are crawling with helmet-clad kids on two wheels. We arrive on a Saturday morning and find riders of all ages perfecting their tricks as their parents socialize nearby.

“When we opened, we thought we’d be getting mainly tourists,” says Paul. “But the local scene has become so much bigger, and it’s great because a lot of them,” he says, nodding at the youngsters, “are just starting biking for the first time.”

Paul lends us bikes and helmets from the rental fleet, then lets us loose. After a few practice loops near the park entrance, we venture past the skills area and jump lines — where bikers are launching from steep drops and catching air — and instead head for open riding.

Trails range from beginner to experienced, and color-coded gates and signs ensure you know exactly what you’re getting into. We pedal past the Kalikimaka section — named for the row of Christmas trees Paul and Molly planted last year — then under a blue gate into the Spice Forest lined with fragrant eucalyptus, allspice and cinnamon trees. 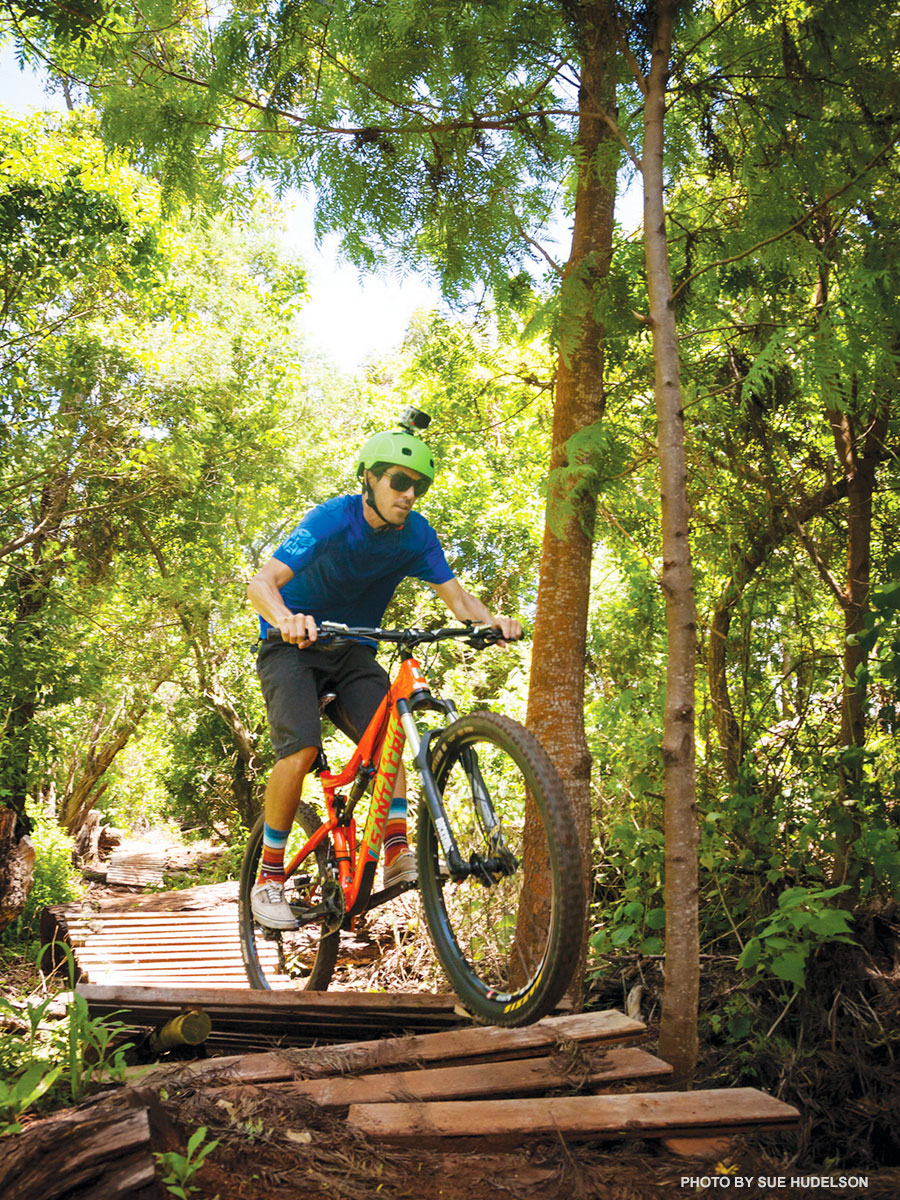 These trails are just two reasons Molly refers to the Bike Park Maui experience as “part mountain biking, part farm tour.” We curve along the Koa Trail lined with fledgling koa trees — also planted by Paul and Molly — before reaching the highly technical Bridges section. Living up to its moniker, this expert trail is lined with enough deep roots and plank bridges to disqualify recreational riders like La Hikina and me. We dismount and walk our bikes through this section as Brad rolls past us to test his skills. Thankfully, he’s still smiling when we catch up to him at the trail’s end.

Just around the corner we roll up to what looks like a pineapple field on steroids. More than 700 agave tequilana plants (also known as blue agave) burst from the landscape, their massive spiky leaves resembling a frozen explosion. But these beautiful giants are more than just for looks; Paul and Molly plan to cultivate the plants to produce commercial agave liquor — what you’d legally be able to call “tequila” if this were Mexico. Elsewhere on the property, a local farmer is growing organic heirloom tomatoes on two-acres of leased land.

We breeze down a pump track that sends us bobbing like a rollercoaster before arriving at our final descent along the Hobbit Trail. It’s hard to tell us adults apart from the kids, as Brad and I exchange hollers from behind the handlebars. We follow a zigzag pattern through the park until we can’t go any further. Knowing that our ride is nearly over, we take our time peddling back to home base.

By now, my grip is a bit more relaxed, and my confidence restored. The allure of a bike has always been powerful, and today proved that the best biker out there is the one having the most fun — no death-defying tricks required.

“This park has some extreme elements,” confirms Paul, “but it was built for fun.” 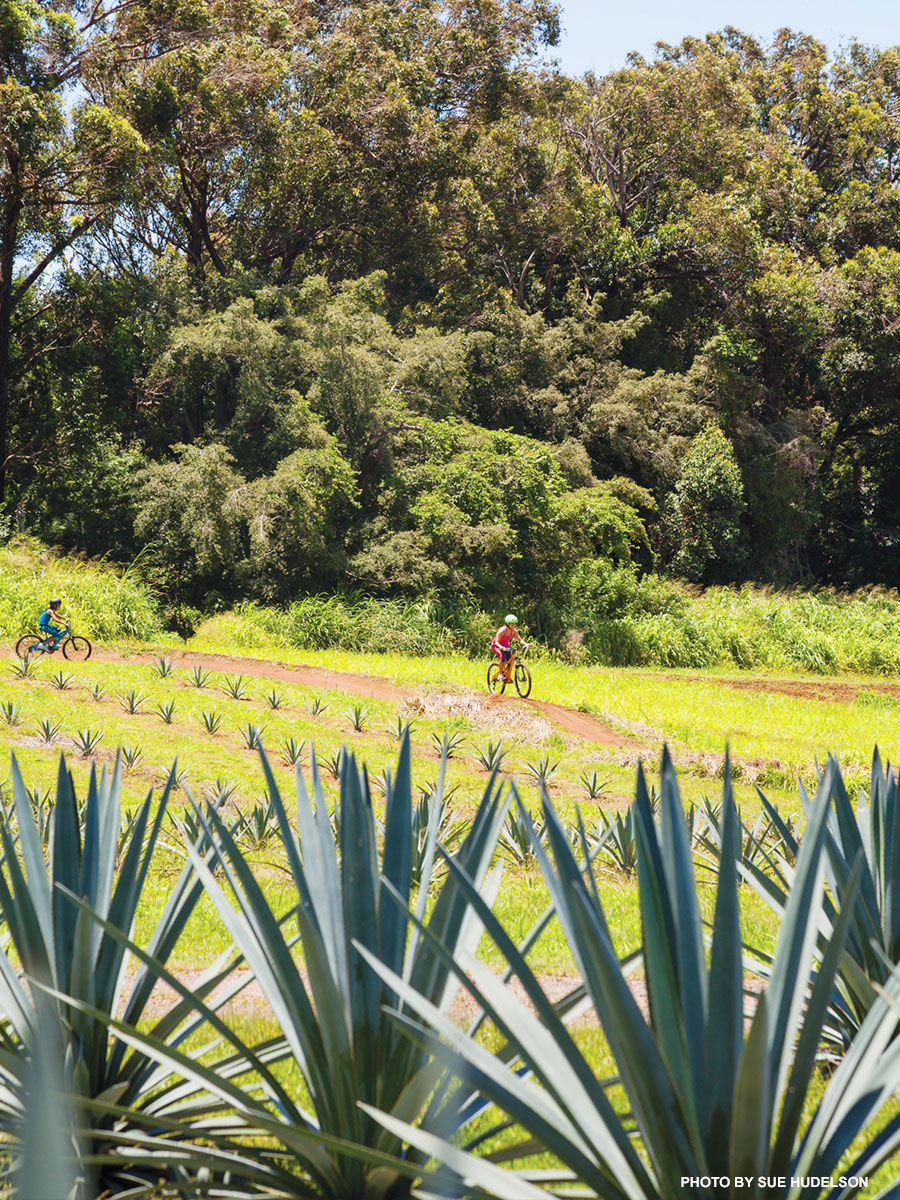