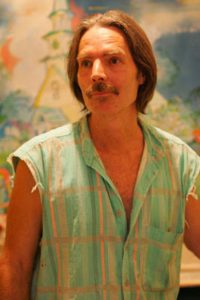 Meeting David Sandell in his Wailuku gallery is like watching one of those quirky movies where a character hides in a wax museum. The camera slowly pans past the frozen, lifelike figures . . . then swings sharply back to surprise the living one.

In Sandell’s case, the illusion is made quirkier by the figures around him. Here stands a 10-foot-tall Jimi Hendrix. There, a life-size Jack Nicholson. Across the room, Janis Joplin takes a belt of Southern Comfort. A hula giantess dances across one wall. The four Beatles gaze down from the ceiling. Willie K rubs shoulders with Winston Churchill. Bob Dylan sings through plexiglass.

In the center of all this pictorial celebrity kneels a wiry, barefoot Robinson Crusoe in a sleeveless shirt and paint-flecked cutoffs. As motionless as one of his creations, artist David Sandell gazes intently at a print he intends to frame. He sits seiza-style on his knees and ankles, as if meditating.

“All these things were drawn on my knees,” Sandell grins, waving a hand around the 133 North Market Street storefront crowded with the products of 30 years of frenetic creativity. Here are town maps, posters, playbills, prints, books, paintings, lamp shades, cartoons, t-shirts by the dozen, and ad campaigns for imaginary products (“Maui Gold Ultralites—Fine Cannabis at a Popular Price”). All bear Sandell’s signature block calligraphy and whimsical artwork.

In the entryway I spot two baskets spilling over with bottles of “Dark Mist” perfume.

The artist smiles a little sourly. “No. A lady traded them all for a picture. You need any perfume?”

The riposte is classic Sandell—half ironic, half-serious, all business. You need perfume? He’ll sell you perfume.

“I’m crassly commercial,” he quips. “It’s rare that I start out any project thinking: ‘I’m going to make something beautiful’ and have that be its only intrinsic purpose. Three-quarters of this stuff is the result of someone stimulating me to do it.

“See John Lennon and all these ‘60s icons?” he continues. “I made those for Hair. I lined the Iao Theater with giant pictures of the Beatles, the Stones, Janis Joplin, Paul Simon, that 10-foot Jimi Hendrix over there I have no idea what to do with . . . .”

His pleasant baritone trails off as Sandell’s brain scampers ahead to its next subject. “I actually went back to painting on bed sheets to do those. Maybe that’s the way to sell them,” he muses. “‘Actually slept on by the artist!’”

A Southern California native, Sandell has been making, selling, and occasionally sleeping on art most of his life. “Ever since I was a kid, I had it in my head that I was going to be a cartoonist,” he says. “For a while I even had a little kiosk on Ventura Boulevard.”

Sandell made his first trip to Hawai‘i in the summer of 1969, not to draw, but to pick pineapples on Lana‘i. “It was soooo hard!” he recalls. “I got over to Maui once or twice. Lahaina was a ghost town back then.”

Summer ended and Sandell went back home, but Maui tantalized him like a dark-eyed siren from one of his earthy Vineyard Tavern cartoons. Four summers later, he strode back into Lahaina to find the former ghost town stirring to life. One of the stirrers was fellow California emigré Don Graydon, who had sailed a trimaran to Lahaina, sold the boat and started a weekly tabloid called The Lahaina Sun.

“I gave him some atrocious cartoons,” Sandell recalls, “but he must have thought they were remotely clever. He started asking me to do goofy little illustrations for articles. That was my forte. He’d say: ‘Here’s a boring article—try to make it look interesting.’”

When the paper moved to Wailuku in 1974 to become The Maui Sun, Sandell moved, too. Thus began a relationship with Central Maui that endures to this day. Makawao, Ma‘alaea Harbor, and Wailuku all were reborn under his flying pencil. Pa‘ia, Waikapu, Pu‘unene, and other regional townships also got the distinctive Sandell treatment—a look that is both historically accurate and mildly psychotropic.

Viewing Maui through this artist’s lens is like looking into a fun-house mirror. The characters and settings are recognizable, but they seem mutable, not “fixed” in the medium. You sense that if you turned your back on one of these drawings, the jaunty, troubled figures within might cakewalk off the page, or melt, or form a theatrical troupe.

Or plunge into the intensely black, wavy shadows that are another Sandell trademark—a legacy of the pre-1984 period when color printing was so far out of the artist’s financial reach that everything was rendered in black and white.

Like the late “Captain Kenny” Neizman’s black Sharpie-pen renderings of toothy pelagic fishes, these “early period” Sandell cartoons are classic Maui-obelia— vivid reminders of a time when island life was as free and loose and unpredictable as hippies on a mushroom hunt.

In a way, Sandell is still recreating that golden age. Although his current work features all the whiz-bang coloristic effects and computerized razzle-dazzle Kinko’s can provide, the subjects remain iconic—“Old Maui” street scenes detailed down to the last pebble: grizzled cowboys, knowing con artists, and plumed street gypsies from a more playful, more eccentric, and far more interesting time.

As Henri Toulouse-Lautrec was to Parisian cafe society in the 1880s, so David Sandell was to Maui a century later—the intrepid chronicler of a beau monde fueled by passionate creativity, genteel poverty, mild hallucinogenics, and the Bohemian illusion that this mid-Pacific idyll would never end.

Luckily for those who came later, Sandell is an unrepentant pack rat. “I never throw anything away,” he explains. “I’m in the business of plagiarizing myself.” Thus today we see preserved in Sandell’s work literally thousands of street scenes, historic buildings, and “glimpses” of Maui terrain that otherwise would have gone the way of everything else from that era—to cockroaches, mildew and unremarked oblivion.

Thankfully, we can also continue to enjoy the inhabitants of all these townscapes and landscapes—that loopy cast of endlessly recycled Sandellian dogs, cats, fish, birds, horses, and raffish cartoon people who might be celebrities, presidents, movie stars, famous warriors—or even your Uncle Baylo.

I don’t think even the artist has ever tried to number them all, but I’d guess his cartoon Mauians run well into the hundreds by now. Or maybe it’s the same Mauian re-imagined hundreds of times. With David Sandell, you’re never quite sure.