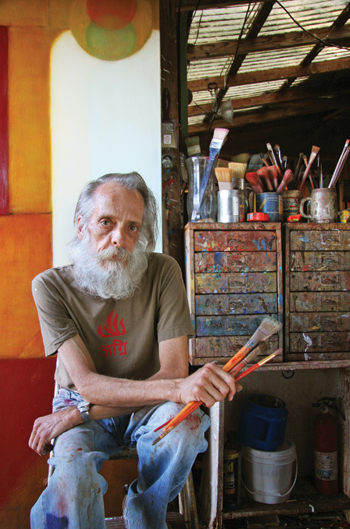 At age nine, Tony Walholm was lying in an oxygen tent when he had a life-altering vision. “I realized I had the power to ask for healing,” recalls the Kula oil painter.

As a child in Territorial-era Honolulu, Walholm needed healing more than most. Abandoned in infancy by his father, a jazz drummer from Norway, Tony suffered from a faulty immune system that exposed him to both asthma and polio.

As a result, he grew up physically slight but intellectually ravenous. “I was always the smallest guy on the block, but always the one with my head in a book,” recalls Walholm, now sixty-four.

At one point, he wasn’t even expected to live. “I was given last rites in the third grade,” he says. His mother, Honolulu sculptor Mildred Toni, took her son out of school that year. It would be six years before he returned. In the interim, he got an extraordinary education, and he willed himself to live.

“In those years when I was out of school, my mom lined up some great tutors for me,” he recalls. “Some amazing people came through Honolulu in the 1950s—I studied with a Hungarian freedom fighter at one point, and later with a duke from Holland.” 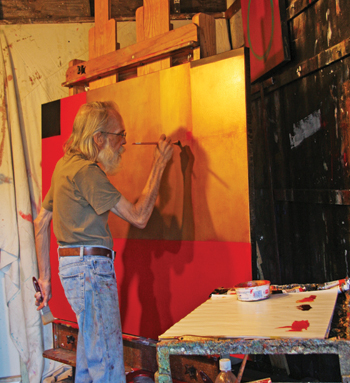 While his itinerant tutors whetted Tony’s appetite for the life of the mind, his mother stoked his interest in art. When she gave up painting for sculpting, she passed her Windsor and Newton oils to her ten-year-old son and set him up in the shower.

“I was messy at first,” he admits. But he stayed with it. “When my canvases got too big for the shower, I moved outside. I started with realism. I painted rustic buildings, because I liked the textures of old wood, and layers of paint chipping. I tried to reproduce those patinas on my canvas.”

If he kept one, that scrapbook might detail Walholm’s encounters with visionaries like anthropologist Joseph Campbell, who came to a show of the painter’s work in Waikiki; surrealist master Salvador Dali, who was at a party that Walholm attended in Spain; or Buckminster Fuller, whom he met while the architect was at the Hawaiian Village Hotel, building one of the world’s first geodesic domes. The book also might recount Walholm’s 1974 travels through Europe and North Africa with a flamenco troupe, his master’s degree from Oregon State, and the births of his two daughters.

“No matter what you think about mastering the paint,” Walholm explains, “you never really do. The paint will always surprise you.”

But Walholm isn’t a scrapbook kind of guy. Unsure as a child that he would even have a future, he doesn’t spend much time these days looking backward. Instead, he gazes speculatively at four slender, human-sized canvases awaiting further brushwork in his rustic Kula studio.

“These are my ‘Tall Guys,’” quips the painter, whose slight stature, deep-set eyes and flowing silver beard give him a wizardly aspect. Indeed, the four canvases seem brushed by a sorcerer’s hand. The colors are bold, the shapes distinct, the textures fixed. But glance away and back again, and the paintings seem to have changed just slightly.

“When an art work is human-sized,” Walholm says, “it’s like an encounter with another person. And people change. I tell my students a painting is like someone you care for but may not get along with all the time.”

Walholm sets the brightest of the Tall Guys in the center of the leaf-strewn studio floor. Tilting the picture this way and that beneath studio lights, he examines its bold red hues and intersecting textural planes.

“With this one, I’m trying to set up some accidents,” he muses.

Accidents? An artist spends a lifetime learning to control line, proportion, perspective, brushwork, color, media and materials; then wants to cause . . . accidents?

“No matter what you think about mastering the paint,” Walholm explains, “you never really do. The paint will always surprise you. That’s what I live for. I want accidents. That’s why I work with gravity a lot—I’ll set the canvases at angles or flat on the floor; move the paint around with spray bottles and scrapers. For me, it’s about the process, not the product.”

That sentiment notwithstanding, the process thus far has created 700 to 800 products, by Walholm’s estimate. Most are owned by private collectors on five continents, but a handful have found prominent public perches. Among these are a commission for the Stanford University Children’s Hospital in Palo Alto, and purchase award pictures in the Hawai‘i State Art Museum.

Then there is the immense gold-and-black picture Walholm painted for the Maui Arts & Cultural Center’s Castle Theater. Titled Kane/Wahine, that shimmering, mysterious canvas has beckoned untold thousands of patrons up the Castle’s grand staircase since the center opened in 1994.

“Chris Cowan [a former executive director of the MACC] sent me the elevation plans for the stairwell, and I wrote an eleven-page proposal for the piece,” Walholm recalls. “I wanted the painting to reveal itself as you go up the stairs and then move with you as you go off to the left. As you walk past it, the planes keep shifting.”

In the catalogue for one of his shows, Walholm wrote of a philosophic breakthrough that helped produce that epic canvas. He had been working in 1992 on a series that became known as the “vessel” paintings.

“I saw the work not on a metaphoric or symbolic level,” Walholm writes, “but as being a vessel, a container of energy which is to be transmitted to the viewer through active color and form.

“It was Kandinsky who said that the high mind is music and painting, through which we deal with the meaning of life and the hope of humanity,” he continues. “A refined soul, a refined artist, chooses the expression of emotion and intellect, chooses the vibration of compassion. Making those choices is believing we can heal the planet.”

Having healed himself through art, Tony Walholm is determined to send that restorative power outward into the universe. “Find your deepest feelings and convey them in the medium,” he says. “And never doubt that the power of the mind is incredible.”