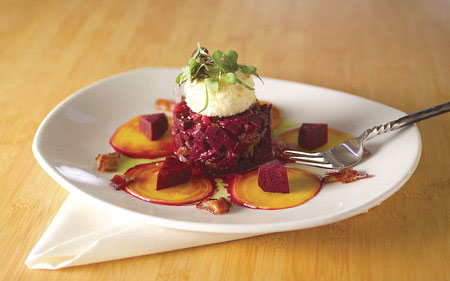 Any island foodie worth his or her salt knows the story behind Hawai‘i Regional Cuisine. In the early days of Hawai‘i’s burgeoning tourist industry, the food wasn’t much to write home about. Continental cuisine ruled the fine-dining kitchens. Meats and produce arrived much the same way visitors did—jet-lagged after a long journey from a distant land. Chefs struggled to imbue limp Romaine lettuce and frozen cocktail shrimp with life, often letting outstanding ocean views make up for uninspired dishes.

In 1991, twelve chefs staged a revolt. They partnered with local farmers, ditched the dictatorship of imported foods, and brought crisp clusters of watercress, sun-ripened papaya, and fresh-caught uku (snapper) to the table. Coining the name “Hawai‘i Regional Cuisine” (HRC), they gave the world a taste of what happens when classically trained cooks have their way with ripe Pacific flavors. Seventeen years later, the movement to unite local farms and kitchens has never been more important.

“Local agriculture is at the core of everything,” says Charlene Kauhane, who represents the Maui County Farm Bureau. “It’s self-sustaining. It’s about growing food to live. We’re an island-based people who need to take this seriously.”

From the start, local agriculturalists were the natural partners in the chefs’ revolution. While the chefs were looking for tastier menus, vegetable growers were struggling to overcome Hawai‘i’s high cost of production and being undercut by mainland competition. Standing orders from big-name clients gave many farmers the boost they needed to stay in business. Says Donna Jung, publicist and wife of Chef Mavrothalassitis, “A ‘critical mass’ of chefs promising to order from farmers allowed them to return to a rural lifestyle.”

On the other end of the market equation, diners reveled in the fresh flavors of the island-inspired cuisine. Critics showered the HRC chefs with many of the industry’s highest accolades: James Beard awards and Mobil stars. Hawai‘i earned a place on the culinary map, attracting visiting gourmets from around the world.

At the outset of the HRC movement, the chefs had to adjust, and learn what crops could grow here. “We were dreaming about zucchini flower and white asparagus . . . the same produce that grows in California and France,” says Mavrothalassitis. “It took a while to realize that some things don’t grow here.” But oh, what he can do with what does. Some of his favorite local finds include sea asparagus, Kula strawberries, and Sumida watercress, grown in Pearl Ridge on O‘ahu.

While certain cold-weather crops don’t grow well here—stone fruits, for example—today’s chefs have just about their pick of local produce. Longtime farmers, such as Warren Watanabe of Kula, responded to the chefs’ requests for specialty produce. The cabbage farm that his parents started back in 1939 now turns out tender micro-greens that grace the entrées served at the Lahaina Grill. Across the state, farms are producing edible lavender, sweet Maui onion, organic pineapple, vine-ripened tomatoes, boutique goat cheeses, wild mushrooms, single-estate coffees, farmed lobster and abalone, and grass-fed steaks.

With this bounty in mind, it’s surprising to learn that, according to the Farm Bureau website, Hawai‘i still imports 80 to 90 percent of its food. Given the rising cost of fuel and dramatic fluctuations in the travel industry, this renders our food supply extraordinarily vulnerable. When the planes don’t fly—as happened after September 11th and Aloha Airline’s recent bankruptcy—much of our food isn’t delivered.

“We’re really in this Catch-22 right now,” says Chef Beverly Gannon. “We talk about sustainability, but the cost to do business or to grow here is too high. The sad truth is that things grown here cost more than things brought in from the mainland. We try desperately not to pass it on to the customer, but it’s getting really difficult.” Still, she says she’s “willing to pay the higher price for the fresher product, and to keep our farmers in business.”

Farming in Hawai‘i is no picnic; island agriculturalists face higher costs of production than their mainland counterparts. Shipping fertilizer and equipment to the Islands is expensive. Hawaiian farms are often too small or hilly for machine harvests. The labor pool is comparatively sparse and farmers can’t pay wages comparable to what hotels and restaurants pay. Finally, increasing government regulation places such a burden on farmers that many are throwing in the trowel.

Gannon laments the recent loss of local dairy and egg farms. “Maui is dairy-free; we’re almost fresh-egg-free. I don’t know how old my milk is when I get it now,” she says. “When you see what we’ve lost in the last five years, it’s sad. I think it’s really hard, once you’ve lost something like that, to bring it back.”

It may be hard, but not impossible. As the HRC chefs demonstrated years ago, the market will respond to demand. Steadfast commitment to local agriculture, like that shown by Gannon and the other HRC pioneers, is necessary to give farmers the incentive to continue working the land.

“Choosing to buy local is one little thing people can do every day to contribute in a big way for a better Maui,” says Kauhane. By committing to “eat local,” whether at home or in a restaurant—and being willing to put our money where our mouth is—we can help keep Hawai‘i’s agricultural land in food production.  That’s not to say that “locally grown” is always more expensive, particularly as transportation prices skyrocket. Often local farmer’s markets have the ripest fruits and the best prices. Besides, according to Kauhane, when you buy local, you’re buying much, much more. “By supporting agriculture,” she says, “other benefits naturally surface: stronger communities through positive relationships between buyer and seller, robust farmlands, and more careers that allow kids to live at home.”

Watanabe, who serves as the executive director of the Maui County Farm Bureau, would like to see the relationship between farmers and chefs grow. He facilitated a farmer-buyer symposium at Maui Community College this past June. “It’s critical that the farmers and the buyers talk to each other,” he says. “It’s not as simple as it sounds. The farmer has to understand the criteria the buyer has for satisfying his customers. The buyer has to understand what the farmer can produce. And both sides need to make money.”

Entrepreneurs like Chef Phillipe Padovani are already busy doing just that—teaming up with farmers on lucrative future endeavors. The high-end chocolatier has been urging state legislators to approve a bill that will bolster cocoa production in the Islands. “In two to three years, the industry will be worth $100 billion,” says Padovani. He thinks Hawai‘i deserves a cut of that. He envisions Hawaiian-grown chocolate sold in numbered boxes with its domain name burnt into the side, similar to wine. “Chocolate is easy to carry on as a gift,” he says. Plus, “It puts smiles on people’s faces.”

By supporting such initiatives, Hawai‘i might just make the shift from importing to exporting food. Now that would be revolutionary. In the meantime, both our taste buds and our rural landscape stand to benefit from a renewed commitment to Hawaii’s very own regional cuisine.