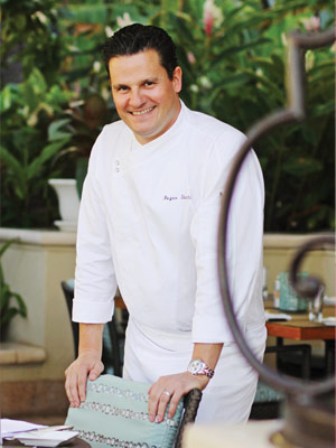 Roger Stettler may be the most famous Maui chef the average visitor hasn’t heard of. A native of Bern, he was named a master chef by the Swiss government in 2004, the highest accreditation a chef may attain in that country. He is also executive chef of the Four Seasons Resort Maui—which means his idea of a celebrity lifestyle is to oversee every aspect of food and beverage at the five-star hotel: fifty-five cooks, all menu planning, recipe creation, and cost control for everything from the fine-dining restaurants to room service and pool bar.

That cuisine and service at the Four Seasons are consistently top-notch is a testament to Stettler’s leadership, and the reason his peers have tipped their toques to him as Aipono’s 2012 Chef of the Year. Colleagues are equally impressed. “Chef Roger maintains an impeccable product,” says Jonathan Cruthers. “He also recognizes the need to pass on his knowledge and develop his team to be great chefs in their own right.” Adds Maria Jagla: “Roger is always supportive, caring and very guest-oriented.”

Stettler completed his culinary-arts training at the renowned Hotel Kulm in Arosa, Switzerland, then honed his skills in five-star hotels in some of the world’s most exotic locales—St. Thomas Virgin Islands, Singapore, Thailand, and Korea—before settling on Maui in 2004.

Chris Speere, Maui Culinary Academy project director, praises Stettler’s mentorship. “Chef Roger has enriched our academy as a highly respected role model. As a judge in our garde manger and advanced cookery final exams, he delivers an exacting critique in a supportive and nurturing manner.” Stettler serves on the Academy’s advisory and Noble Chef committees and takes time from his extensive responsibilities to offer first-semester Academy students tours of the Four Seasons kitchens, providing them with firsthand awareness of the standards of professionalism and skills essential to career success. Recently the Academy presented Chef Stettler its highest award, Culinary Arts Ambassador.

With Chef of the Year, Aipono seconds that notion.

What his peers say:

“Amazing creativity. He goes above and beyond to make special occasions unforgettable.”