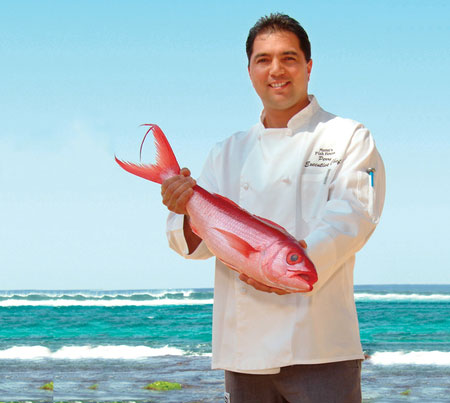 Unlike many of his colleagues, Chef Perry Bateman didn’t sharpen his knives in culinary school; he was raised in restaurants. His grandparents, aunties and uncles all owned restaurants on Maui. “It’s in the blood,” says Bateman. His stepfather took the aspiring chef under wing and taught him the basics. After landing a job at Mama’s, Bateman worked his way up from a fresh-faced eighteen-year-old in the kitchen’s pantry to talented sous chef. When owners Floyd and Doris Christenson offered him the executive chef position, he told them he was too young. They convinced him otherwise. Twenty-one years later, he’s still pretty darn fresh-faced — despite the responsibility of running one of Maui’s most celebrated institutions. The proud father of three girls is quick to praise his staff and employers for the restaurant’s resounding success. But insiders say Chef Bateman’s commitment to sourcing the finest ingredients available and his personal attention to each plate are key ingredients. Congratulations to our 2009 Chef of the Year, Perry Bateman!

His colleagues call him “a great chef” and “hard worker” who “does and incredible job.”

“Chef Perry runs a high-volume operation and has been able to maintain a very high-quality standard.”

“He is true to his style of cuisine that reflects Hawai‘i.”

“His team really loves him.”