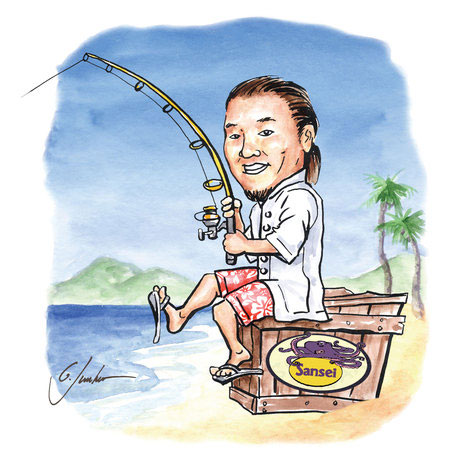 What his peers say about him: “Imaginative.” “A very humble person.” “Fun.” “Constantly working on perfecting his craft and surpassing the expectations set for him.” “A dedicated leader who influences those around him through positive, high energy.”

Colleagues credit Chef Pahk for his infectious confidence. This energetic, no-holds-barred trendsetter draws a line in the sand with dishes like Dungeness crab ramen—a spicy affair of succulent crabmeat in Serrano pepper and truffle broth—and foie gras loco moco. While this thoroughly local, self-trained gourmand enjoys mixing culinary traditions and flavors—toying with multicultural risottos and dashi—he’s more than capable of turning out a perfectly traditional filet doused in bleu cheese.

Pahk’s success is due, in no small part, to his generous participation in Maui’s food scene. He contributes to charity cookbooks, leads public cooking demos, and donates time and energy to various industry events, such as Maui Chefs Present and the Maui Onion Festival. He shares his talents, and in doing so, gets his name out. Two years ago Honolulu Weekly identified him as one of six Hawai‘i chefs to watch. Readers of The Maui News voted him “Best Maui Chef.” We’re happy to congratulate Maui No Ka ‘Oi magazine’s 2007 Chef of the Year.