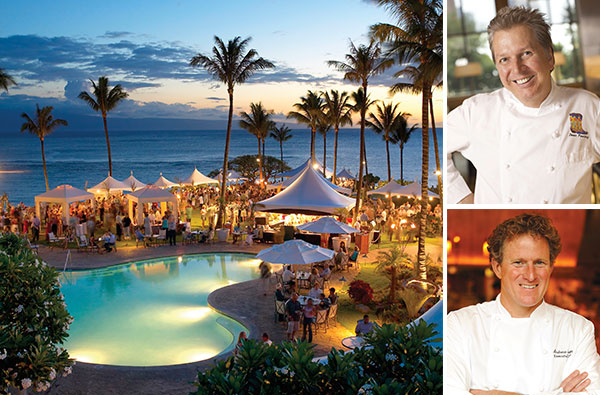 Long before I moved to Hawai‘i, I made the annual pilgrimage to Maui for the longest-running wine-and-food event of its kind in the nation. For me and thousands of others, the Kapalua Wine & Food Festival was a much-anticipated occasion whose formal kickoff was a Friday-night Grand Tasting held seaside on the grounds of the glorious but now extinct Kapalua Bay Hotel.

The magic of the proceedings always seemed as much to do with the setting as it did with the world of wines uncorked throughout the evening. That, and the fact that Kapalua’s chefs put their best efforts forward to nourish oenophiles as they quaffed from sunset to moonrise. And that was just the first day of the festival.

Before the weekend was through, the Ritz-Carlton Kapalua, the Bay Hotel, and Kapalua restaurants would host seminars and tastings, tours and chef demonstrations, and wine-pairing dinners to benefit various charities. The piece de resistance was then and ever shall be the Sunday night finale: a Seafood Festival sponsored by Maui No Ka ʻOi Magazine and held on the Ritz-Carlton’s Beach House Lawn above D.T. Fleming Beach Park.

When the Bay Hotel made way for the Kapalua Bay Residences, the festival’s Grand Tasting lost its original home. The big news this year is that it’s hosted by Maui’s newest resort partner, The Montage, manager of the Residences. The symmetry of this return to roost is so poetic that I’m reminded of something T.S. Elliott wrote:

“And the end of all our exploring will be to arrive where we started, and know the place for the first time.”

It may be the same ground beneath our feet as in days of yore, but the structures, landscape and layout are all very new.

Michael Jordan, master sommelier and host of the festival, expressed his unbridled enthusiasm for these changes during a recent phone interview: “The Montage will add a whole new level of excitement, and we are pleased to include a musical component to the weekend: music by winemakers.”

Jordan isn’t speaking merely metaphorically. As festivalgoers have grown younger, the days of standing around, idling sipping and snacking, have given way to more aerobic activities for wine lovers who also love music and dancing. In response, winemakers are coming out of the woodwork with their instruments in tow.

“Among other performances planned for the festival, there will be a late-night jam session Saturday at Sansei [Seafood Restaurant & Sushi Bar],” says Jordan. “People will be surprised to hear the quality of music made by well-known winemakers whose talents extend beyond viticulture.”

Music may be the sugar on top, but the focus of the festival still remains on the food and wine. Besides the two grand events on Friday and Sunday evenings, seminars will explore the wines of the Russian River Valley, Santa Lucia Highlands, and the Pacific Northwest. The schedule is filled with panel discussions and tastings of rare and exclusive wines — many of which have been plucked from the winemakers’ personal cellars — plus demonstrations presented by celebrity chefs Dean Fearing and Andrew Sutton.

“Above all,” Jordan reminds us, “the festival is about bringing together the cool, positive vibe of the winemakers. It gives guests the chance to meet them up close and personal, where they can share a love of wine and Hawai‘i — the land, sea, sky, local farming . . . and the higher consciousness that comes from sharing this bounty.”

I second that emotion! Here’s to tradition and innovation, and an encore performance by Fred Scherrer’s band with a nice long pour of ’99 Leonetti cabernet.