When it comes to off-road adventures on Maui, the XTERRA World Championship has the market cornered. The last in a yearlong series of triathlons held worldwide, it combines a one-mile rough-water swim, nineteen-mile mountain-bike ride and 10K trail run.

Begun as a tourist attraction in 1996 with 123 participants, the XTERRA World Championship now draws more than 800 amateur and professional athletes from thirty-three countries, forty-four states and U.S. territories. “Competitors from all over the world fight for the right to toe the line on Maui,” says Janet Clark, president of TEAM Unlimited/XTERRA. “It’s the Who’s Who of off-road triathlons.”

For amateurs, bragging rights are at stake. For the pros, there’s a chance to earn a chunk of the $105,000 prize money. 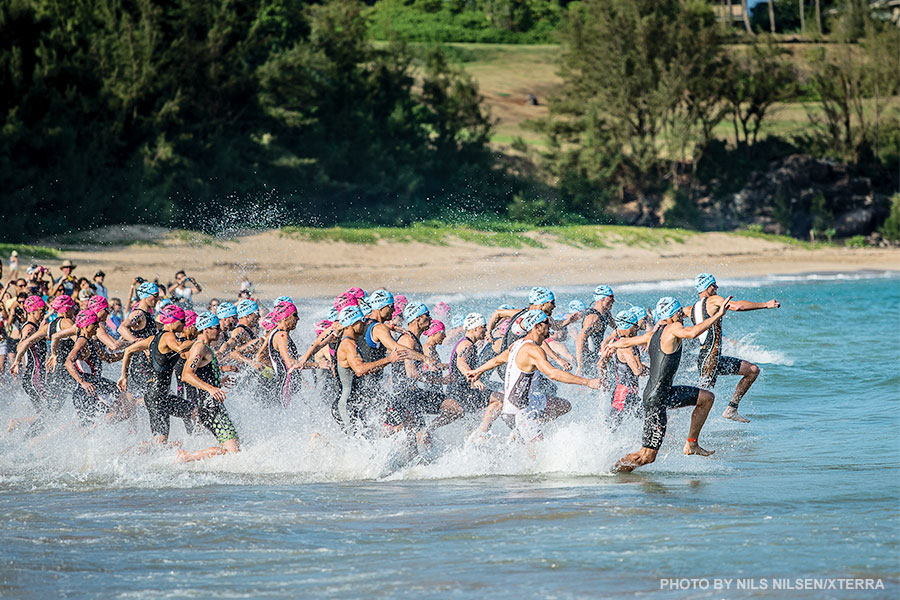 Held in Kapalua, on Maui’s west side, the course features choppy waters, rocky inclines and switchbacks, and shin-busting dirt trails that snake through former pineapple fields and dense ironwood forests. Besides physical exhaustion, athletes often face mental weariness as they push themselves to the breaking point. “It’s a shock to the system for some,” says Clark, who explains that many competitors arrive ill prepared for Maui’s hot, humid climate, intense sun and strong ocean currents. But for first-timers and seasoned professionals alike, this three-pronged race is a literal and metaphoric uphill battle.

Fortunately, you don’t have to be a triathlete to participate — XTERRA is also a spectator sport.

From the moment the starting gun is fired at D.T. Fleming Beach, onlookers can take in the action from the lawn of The Ritz-Carlton, Kapalua, which is also the transition site for all three legs of the race.

“There’s a lot of action in a short period of time,” says Clark. “And you never know what’s going to happen — so much can go wrong.”

In 2011, seven-time Tour de France champion and XTERRA competitor Lance Armstrong started strong, but crashed and hit his head, dropping from second place to twenty-third. And two years ago, an ill-timed tsunami warning forced many athletes to higher ground, where they spend the night in their rental cars, leaving them cramped and groggy for the race the next day.

Such challenges don’t seem to dampen the spirits of XTERRA competitors. For the past two years, athletes have shown off their dance moves in videos that premiere at the awards banquet, and go viral on YouTube — like 2012’s parody of “Gangnam Style.”

The XTERRA World Championship takes place Sunday, October 26, with exhibitor booths featuring bikes, gear and apparel from Wednesday, October 22. Not quite ready for a triathlon? Athletes of all ages and abilities can experience some of XTERRA’s thrill in a 5K or 10K trail run on the same course the day before the big race — while benefiting nonprofits like Big Brothers Big Sisters of Maui County.