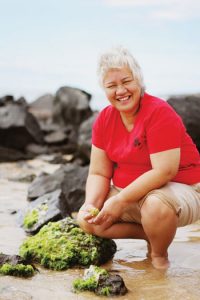 When big surf pounds the Hawaiian shoreline, the air carries the scent of the sea. That wild, clean, and invigorating fragrance originates with seaweeds. Nestled in the reef, half-buried under sand, the many varieties of Hawaiian limu (a term encompassing both seaweed and freshwater algae) compose an underwater forest. It’s ripe foraging grounds for those who know what and where to harvest.

A pair of ten-year-old boys, Mohalu ‘Aikala and Rejan Singleton, strap on masks and dive down to scan the ocean floor. Time after time, they race up the beach, a soggy seaweed specimen in hand, asking, “Is this the one, Auntie?” “No,” says the infinitely patient Napua Barrows, a silver-haired Native Hawaiian schoolteacher. “Find the one that’s standing up like a Christmas tree,” she says. “It’s the one without branches.”

During school breaks, Barrows takes kids from her Central Maui neighborhood to the beach, where they learn about limu, the rich underwater resource of their ancestors. While few island residents nowadays can name more than a handful of limu varieties, Hawaiians of the past knew at least seventy edible seaweeds—each with a distinct flavor, scent, and use.

Traditionally, limu expertise belonged to women. Until Queen Ka‘ahumanu and Princess Keopuolani overthrew the kapu system in 1819, royal decree forbade Hawaiian women from enjoying many of the Islands’ tastiest foods—pork, turtle, coconut, and most bananas, to name a few. Had they not been so resourceful, wahine would have endured a bland diet; instead, they turned to the sea for nutritious and flavorful delicacies.

Limu kohu, the “supreme” seaweed, was among the most sought after. Once a staple condiment in every Hawaiian household, it imbues fish and meats with a penetrating, iodine-rich taste that is still adored by many by locals. Crunchy, red manauea was another favorite, cooked with meats in the imu (underground oven) until melting into a savory jelly. (Today it’s preferred in poke: diced raw ‘ahi or octopus mixed with chili and salt.)

Queen Liliu‘okalani liked limu huluhuluwaena so much that she had the dark, stringy seaweed transplanted from its native range in West Maui to her seaside residence at Waikiki, where patches can still be found sprouting from sand-covered rocks. (This limu might owe some of its popularity to its spicy name: “huluhulu” translates as “pubic hair,” a reference to the plant’s wiry strands.)

Hawaiians didn’t just eat limu; they wore marine plants as lei, and used them in dyes and medicines. Golden-brown, speckled limu kala was employed to heal both physical and emotional wounds. “Kala,” which means “to forgive,” was instrumental in ho‘oponopono, the ancient Hawaiian process of conflict resolution. During ho‘oponopono, the injured and accused parties gathered to pray, seek forgiveness from one another, and eat a limu kala leaf as a symbol of reconciliation.

Hawaiian healers applied leafy limu kala poultices to coral cuts, and those burdened by persistent illnesses wore a bristly lei into the ocean, letting the waves remove the ailment along with the lei.

Unfortunately, most of what washes up onto modern Hawaiian beaches is invasive, or “rubbish limu.” Aggressive alien seaweeds dominate marine resources and diminish diversity. In particular, Hypnea musciformis and Acanthophora spicifera, two recent introductions, have been wreaking havoc on the reef, smothering native limu and corals. The damage spreads to herbivorous fish and their predators. For islanders who still practice many of the old ways, this can be devastating.

Over the years, Barrows watched native limu slowly disappear from her family’s fishing grounds. In 2004, she formed the Waihe‘e Limu Restoration Group, dedicated to “reforesting” the shoreline.

She describes how her late grandmother asked her to malama, or care for, the family land in Waihe‘e. “I thought, okay. It’s just this yard. I can do that. I didn’t realize at that time that I would end up caring for all of this!” Sweeping a hand towards the mountain, she indicates the Waihe‘e ahupua‘a, or land division, a wedge from the top of the West Maui Mountains down into the water.

Most of Barrows’s field trips start at nearby Kanaha Beach, where the comparatively healthy reef tosses up limu fragments to be identified and perhaps replanted down current at Waihe‘e. Several seaweed varieties found onshore or drifting in the tide can be transplanted, after they’re painstakingly cleaned to prevent hitchhiking invasives from tagging along.

Barrows untangles a piece of spongy green wawae‘iole from a mat of alien algae. “This one is good,” she says, slipping it into her bag. “It can be replanted.”

Like Queen Liliu‘okalani before her, Napua Barrows is cultivating an underwater garden. “Back then, they didn’t have to worry about invasive species. They could freely move it. But today we have to be careful.”

Barrows didn’t know much about seaweed when she started the Waihe‘e Limu Restoration Group, other than what she learned as a child. “I hated limu! It would get all into my swimsuit!” she laughs. “The beach was just choke with limu then. We had to wade out to open water to swim.”

When she saw the species of her childhood vanishing, she began educating herself, spending time in the field and classroom. Then she discovered Dr. Isabella Abbott, the world’s leading expert on Central Pacific algae—a.k.a. limu.

A plucky ninety-one-year-old known to friends as “Izzy,” Abbott is an award-winning scientist and Native Hawaiian who was born in Hana and raised in Honolulu. She loves revealing that people are more intimately acquainted with seaweed than they may realize. (It’s the carrageenan in toothpaste, for example, and the stabilizer in beer foam.)

Abbott’s lifework is a synthesis of Western science and indigenous wisdom. She interviewed scores of Hawaiian limu collectors, verifying their traditional knowledge with astute laboratory observations and decades of field research. She has penned 150-plus papers and eight books, including the authoritative La‘au Hawai‘i. Her field guides are indispensable to Barrows and others seeking to identify the many algae species found in Hawaiian waters.

Stanford University’s first female biology professor, Abbott retired after thirty years—to head up the ethnobotany department at the University of Hawai‘i. Barrows has heard Abbott called a tough professor. “If Native Hawaiian students didn’t show up for class, she would call them personally at home.” When she visited Waihe‘e, however, the doctor was all smiles, says Barrows. “She was excited to see native people out there working with limu.”

Abbott shrugged off retirement a second time a few years ago to advise local botanist Cathy Davenport in obtaining a graduate degree in Hawaiian ethnobotany. Davenport, another limu lover, has taught classes at Maui Community College on the subject.

“The language of limu is so joyous,” says Davenport. She offers pakaiea, green sea lettuce, as an example. It’s named after a shark god who was swaddled in its silken leaves as a newborn. Even more lyrical is lepelepe-o-Hina, the shawl of the goddess Hina. This ruffled, magenta seaweed shares its name with a native butterfly and a family of flamboyant nudibranchs. Yet another innuendo: it alludes to swirling movements in water, and dancing skirt hems.

Davenport bemoans the fact that Hawaiian limu species aren’t as plentiful today as they were 100 years ago. In addition to invasive species, she says, the loss of free-running streams is to blame. Limu flourishes near fresh water; the diversion of stream water for development and agriculture has decimated estuarial habitats.

Overharvesting also takes a toll. Limu pickers deplete wild populations when they visit sites too often or yank out a seaweed’s holdfast, or root. But economics make it tempting: Limu kohu and manuauea fetch $15 a pound at Takamiya Market. Collectors guard the secret locations where these species still grow.

Barrows acknowledges that the Waihe‘e Limu Restoration Group faces steep odds. “Someone told me I had to find out what caused the limu to be depleted first, stop that, and then plant. I looked at them and said, ‘You and I both know if I did that, I would never get to the beach!’”

Her first aim is to replenish the edible seaweeds that are most valuable to the Waihe‘e community, such as manauea and wawae‘iole. Students from Davenport’s classes and local hula halau (schools) have helped harvest and replant. They experimented with several techniques before adopting the method of using homemade hau cordage to secure transplanted limu to submerged rocks. Some species are successfully regenerating.

Primarily, Barrows works with keiki, children. “When you do a project like this, you want to involve kids. Things open up with kids,” she says. “First the kids come, then you get the parents.”

Back from their beach expedition, Mohalu and Rejan peer into a microscope set up in Barrows’s garage. They use Abbott’s limu guide to identify what they’re ogling: lipe‘epe‘e, a seaweed that hula dancers avoid eating, lest the limu’s tendency to pe‘epe‘e, or stay hidden, hide the secrets of hula from them.

Barrows helps the boys record the seaweed’s measurements in a project log. With practice, her apprentices’ observational skills will sharpen. A picture will form in their mind’s eye of the plant’s growth pattern and habits. They will have inherited the delicious legacy of their Hawaiian elders—just in time to cultivate the next season’s limu harvest.

aki‘aki: “To nibble,” named for the tiny bites required to eat it. Eaten raw with ‘opihi (limpets), or baked with fish or chicken.

kohu: “Supreme.” Favorite limu of most Hawaiians. Can be pounded and rolled into walnut-sized balls for indefinite storage. Penetrating flavor, used in small quantities as a condiment with poke, lomi, and stewed beef.

lepe-o-Hina : “Hem, or fringe; shawl of the goddess Hina.” Also called “cockscomb limu” or “one-day limu.” Used to thicken stews, or served dried as a snack.

lipe‘epe‘e : Li refers to limu; pe‘e means “to hide.” Chopped and eaten with raw fish. Forbidden to hula dancers, who believed that eating it would hide the secrets of hula from them.

lipoa : “From the deep.” Highly prized for its spicy flavor. Chopped or pounded and lightly salted, it took the place of sage and pepper in the ancient Hawaiian diet.