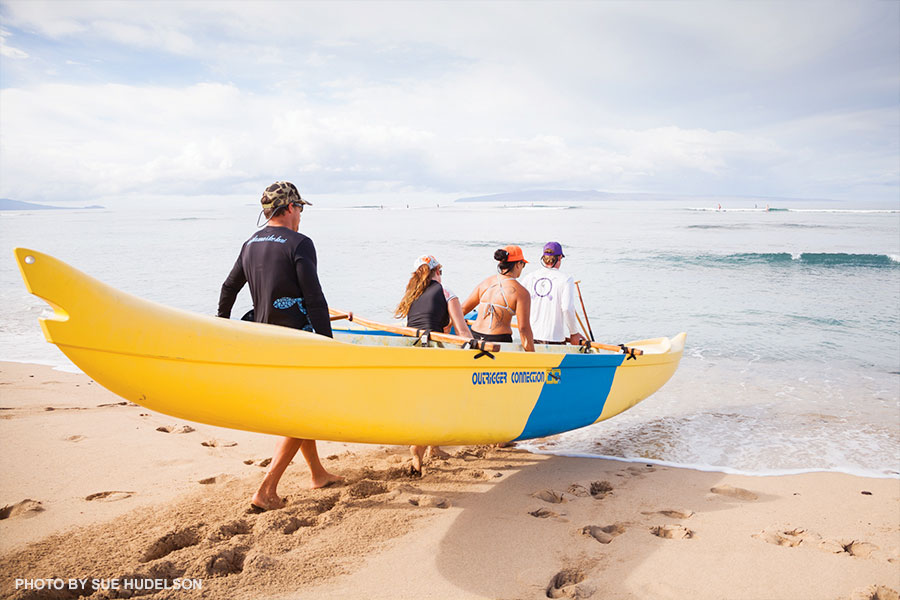 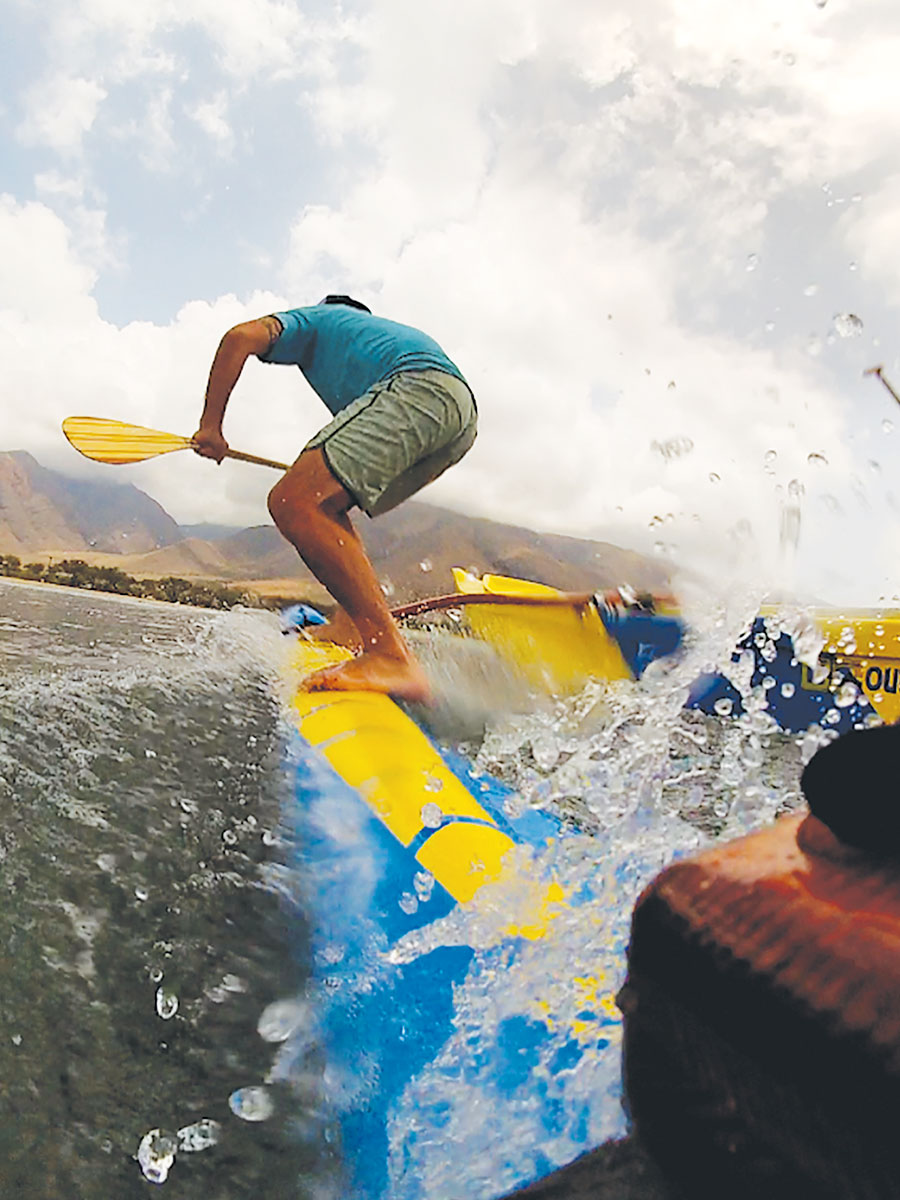 I scan the surf at Ukumehame. Small, lazy waves break across the West Maui reef’s prickly surface, peeling left and right in gentle succession. In the lull between sets, a few stand-up paddlers stir the water like cooks encouraging soup to boil.

The waves look insignificant to me; I assume this morning’s canoe surfing excursion will be cancelled. I’m wrong. Despite growing up in Hawai‘i, I’m an ocean-sports novice. Today Tim Lara, the suntanned owner of Hawaiian Paddle Sports, will show me how to squeeze a lot of fun out of a little swell.

Lara’s devotion to the ocean is evident in just about everything he does. He’s a champion racer and coach for Hawaiian Canoe Club and coordinates beach cleanups with the Maui Surfrider Foundation. After working for nearly every surf and kayak company on the island, he launched his own business in 2010. Hawaiian Paddle Sports offers guided surfing, stand-up paddling, kayak, and outrigger canoe trips. Canoe surfing is Lara’s newest activity. He and his guides are the only ones currently offering it on Maui.

Before each trip, Lara picks up any trash on the beach, dispenses reef-safe sunscreen, and offers a quick Hawaiian vocabulary lesson. “Our mission is to enjoy and malama [care for] the ocean,” he says, while lashing the ama (outrigger float) onto the four-person wa‘a (canoe).

To emphasize the enjoyment of the day, he tosses me a ripe mango and demonstrates how to eat it without letting the sweet, golden juice spill everywhere. (He rolls the fruit between his palms, massaging it until the insides feel squishy, then pokes a hole in the skin and sucks the near-liquid fruit out.) 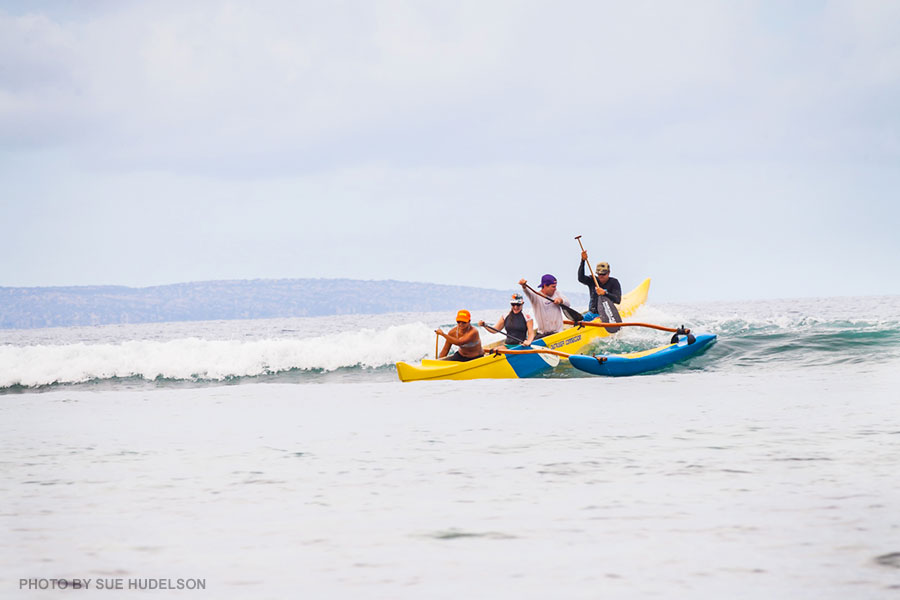 The sun’s rays already feel warm. It’s time to get wet. Two friends and I help hoist the canoe into the water. I climb onto seat three, just ahead of Lara, who acts as steersman. “Makaukau,” he says, telling us to ready our paddles. “‘Ae” — yes — we reply and dig into the glittering aquamarine. The crisp outline of Kaho‘olawe, the nearest island, beckons on the horizon. As we paddle into the oncoming swell, our boat launches up the face of each glassy wave and crashes dramatically down. The surf that looked flat from the shore is plenty big now that we’re in it.

Canoe surfing is an ancient tradition that’s gaining fresh popularity. More than a thousand years ago, Polynesians crisscrossed the Pacific in double-hulled canoes to colonize Hawai‘i. Once settled, the first Hawaiians used small wa‘a like this one for short trips, battles, and sport. Today, most people experience outrigger-canoe paddling as part of an organized club. Teams gather at dawn to practice in six-person boats. Each paddler learns to pull her weight and match the stroke of the person in front of her. During regatta season, Hawaiian canoe clubs from across the archipelago — and the world — congregate to compete in fierce sprints and long-distance races. 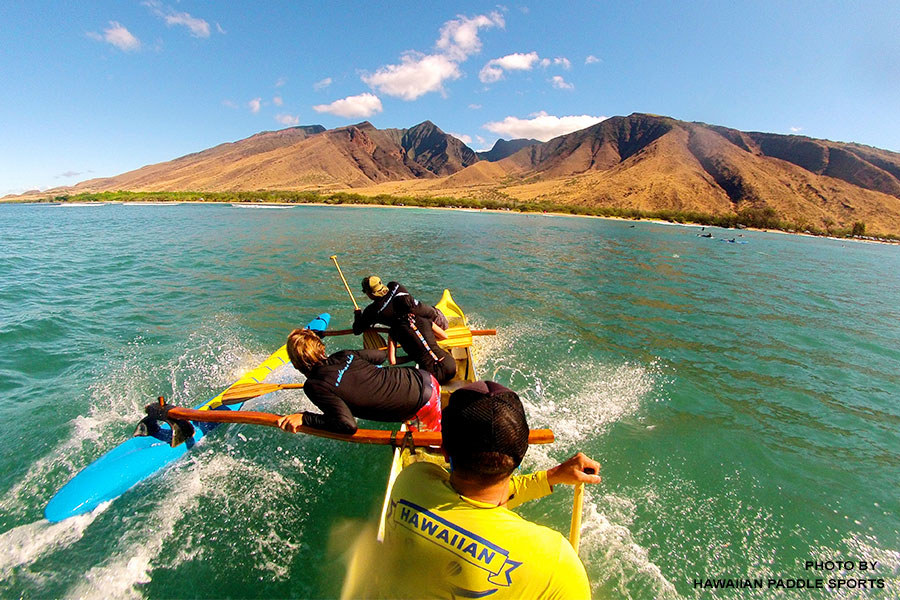 Once bitten by the paddling bug, some athletes invest in their own one-, two-, or four-person wa‘a.They’re pricy toys, but pay dividends in fun. Compared to six-person canoes, the smaller boats are more maneuverable, built for snappy turns in the surf rather than long hauls across the open ocean. Whatever their size, outrigger canoes are revered throughout Hawai‘i. Even in the lineup at Ukumehame today, the regular surfers and stand-up paddlers don’t seem to mind sharing the waves with our wa‘a.

As a swell rises behind us, Lara shouts, “Imua!” We take the command to advance to heart, digging our paddles into the clear water. Our wa‘a surges forward with each stroke. Then the serendipitous moment occurs: the wave picks us up and propels us faster than we can paddle.

“Lawa,” says Lara. That’s our cue to rest our paddles and enjoy the ride. Racing along inches ahead of the tumbling white foam is exhilarating.

Usually this thrill is reserved for individuals strong enough to paddle out into the surf themselves. Four-man canoes make the joy of surfing accessible to more people — including those who may not have the beefiest upper bodies. Stronger strokers can pull the weaker ones along. Cooperation is a key component of paddling, expressed by the Hawaiian proverb “E lauhoe mai na wa‘a; i ke ka, i ka hoe; i ka hoe, i ke ka; pae aku i ka ‘aina,” or “Paddle together, bail, paddle; paddle, bail; paddle towards the land.”

We catch wave after wave, bailing out water between sets. On larger waves, I lean my weight out onto the ama to help prevent the boat from flipping. I’m just getting the hang of it all when Lara suggests something insane. “You’re going to surf the ama,” he says. My face scrunches in disbelief. He offers these improbable instructions: Climb onto the rim of the boat, perch on the inch-wide gunwale, then leap five or six feet over the racing water to the ama and . . . surf? Uh, no. Did I forget to tell him that I’m mostly a spectator? 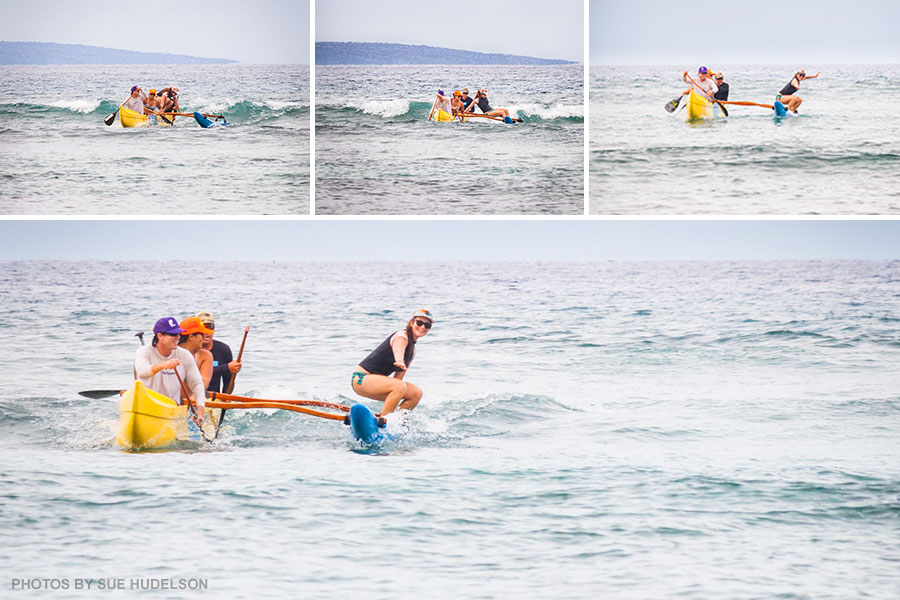 He ignores my protests and maneuvers the boat into an approaching wave. He tells me to set my paddle down while the others dig deep and catch the wave’s momentum. “Now!” he says. I hesitate. The gulf between the boat and the ama seems to widen by the minute. But my chutzpah wins out and I leap. Shockingly, I make it! I naturally step my right foot forward, which means I’m goofy-footed — no surprise there. I crouch on the narrow ama in a surfer’s stance. I cautiously stand up. Before I know what’s happening, I’m surfing!

The canoe slows as the wave disintegrates. I pitch over into the water, still clinging to the ama as it careens through the whitewater.  “Let go or get dragged,” warns Lara. That’s good advice for canoe sailing and for life, but it’s not so easy to apply in the moment.

The boat cruises into shallow territory, trailing me like a dragnet. Lara knows this reef better than his own bedroom and again urges me to let go. There’s wana (sea urchins) up ahead. If I bump the reef, I risk collecting a foot-full of painful spines. Finally I let go. I swim back to the boat and hoist myself in, as awkward as a wet sack of flour, but exhilarated.

“I really didn’t want to try surfing,” I confess to Lara. He laughs. “No one wants to at first,” he says. “Afterwards, they all thank me for making them do it!’”

He expertly steers the boat back into the lineup. Elated, I jump out onto the ama a few more times. Everyone takes a turn at surfing, except for Lara. When he tries, the person steering for him points theama parallel to the breaking wave and almost flips the boat. Oops! Like so many things, steering a canoe is harder than it looks. But chasing down salty fun on a day with smallish surf? That’s far easier than I would have guessed.