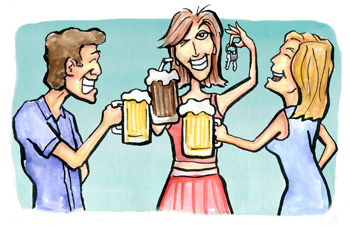 Food-loving ladies and gents, I hope you have a closet full of going-out clothes, ‘cause it’s festival season! Onions, beer, movies, wine, history, or anniversaries: you name it, we’re celebrating it. Here are some highlights from our chock-a-block social calendar:

Once again, yours truly will act as a judge at the Maui Onion Festival, May 1st at Whalers Village in Ka‘anapali. Should we laugh or cry while watching adults and keiki (children) stuff their faces with the fragrant bulb? Luckily, it’s not the raw Maui onion-eating contest Miz G is judging; it’s the cooking competition. Renowned Chefs D.K. Kodama of Sansei, Roy Yamaguchi of Roy’s, James McDonald of I’O and Pacific’O, and reigning champ David Paul Johnson of David Paul’s Island Grill will battle over who can produce the best onion-inspired dish on the spot. Look for the winning recipe in our next issue.

Still smarting from Tax Day? Feast for a good cause and write off $100 of your $150 admission to Pineapple Grill’s Red Carpet Affair, a benefit for Hale Makua, a residential care facility. Voted Restaurant of the Year by MNKO readers two years in a row, Pineapple Grill celebrates its fifth anniversary on May 8th. Specialty martinis and mai tais will complement Executive Chef Ryan Luckey’s superb cuisine. For reservations, call Sakamoto Properties (808) 669-0070.

Fancy yourself a Bikini Blonde or more of a Devout Stout? Name your pleasure at Maui Brewing Company’s second annual Brewfest, May 15th at the Maui Arts & Cultural Center. Sample an array of local and mainland microbrews and let your mug overfloweth. On the wagon? Stop by the Designated Driver’s Booth for handcrafted root beer. The $45 ticket price covers beer, food and music by local bands. Now that’s a deal we can drink to! (808) 242-7469; www.mauiarts.org

Sign up now for Lahaina Restoration Foundation’s Progressive Dinner. (No, it’s not a political fundraiser ala MoveOn.org; it’s a dining experience cleverly split among different locales.) Each course is designed to immerse you in Lahaina’s colorful history. Actors perform vignettes at each destination. Start at Wo Hing Museum, where you’ll practice Chinese calligraphy with one hand while snacking on appetizers courtesy of Star Noodle with the other. Next, saunter over to the Baldwin Home to sup on an elegant salad course by candlelight, just as the missionaries did when entertaining sea captains. Then head to Hale Aloha, where you’ll enjoy your entree accompanied by the heavenly voices of the Tongan Choir. Last year’s chicken-skin performance by the youngest choir members was unforgettable. Two seatings per night, May 28th and 29th. Tickets are $135. (808) 661-3262. www.lahainarestoration.org

Gossip Gourmet is already salivating over the upcoming Seafood Fest, the grand finale of the Kapalua Wine and Food Festival. Inside sources tell us that the island’s top chefs were summoned to draw straws for which fish they could use for the evening’s competition. The Banyan Tree’s chef Ryan Urig drew the coveted scallop, Cameron Lewark from Spago scored ‘opakapaka, James McDonald drew ‘ahi, and last year’s winner, Ryan Luckey, will defend his title with monchong. We can’t wait to pick this year’s Best of the Fest.

Speaking of the best. . . . Congratulations to the 2010 ‘Aipono Award winners! Every year our readers’ choice restaurant-awards program gains more traction; nearly twice as many of you voted this year as last. Hooray! In particular, Miz G applauds the penciled-in opinions on your ballots.

Rather than elect a restaurant for the Best Dessert category, many of you named your favorite sweet on the menu. In addition to perennial winner Roy’s chocolate soufflé, Pineapple Grill’s pineapple upside-down cake, Fu Lin’s fried ice cream, the Ku‘au Pie at Mama’s Fish House, and the chocolate purse at Merriman’s each received mention. One Romeo singled out table 23 at Capische as the Most Romantic. Another claimed that the Best Breakfast is the one you eat after a night of gettin’ busy under the covers. Yowza! But the best vote, by far, was for Best-kept Secret: “My crush in 7th grade on Judy Kondy.” Awwww . . . warms the cockles of our heart, that does!

This year, MNKO was excited to move the ‘Aipono Awards Gala to the Ritz-Carlton, Kapalua, ballroom, where we could accommodate more celebrants and, to the intense delight of our art director, a dance floor.

Most Dangerous Square Footage for Maui Foodies: the chocolate and cheese counter at Whole Foods Kahului. Step away from the parmesan wheel, ma’am. Head-high stacks of imported and local fromage? Bulk chunks of Waialua dark chocolate? It’s enough to drive any gourmet into a debt-producing frenzy!

Tastiest Split Personality: The shared kitchen at 824 Kokomo Road. Is it a local-style breakfast joint? A sushi bar? Or an Indian cafeteria with Burmese influences? All three. Depending on when you arrive, you’ll find a different restaurant behind the door.

Happiest Meal: Fred Turner’s birthday bash at Capische. The retired CEO of McDonald’s hosted 500 of his closest friends at the posh Wailea restaurant; the glamorous crowd spilled into the garden and foyer, feasting and dancing the night away. Chef Brian Etheredge and his staff outdid themselves, shucking fresh oysters, steaming lobster, searing succulent Kobe beef, baking salt-crusted fish, and dishing up foie-gras-spiced cake for the masses. Let them eat cake, indeed!

Washroom with a View: Mala Ocean Tavern. The lapping-at-your-feet ocean view from the men’s urinal is so impressive that gents have been known to holler out to their lady guests, “You have to see this!” Er . . . thanks.

Most-promising French slang: “Stage,” pronounced “staaaj.” Yet again, Americans have absconded with a piece of France’s linguistic heritage. This barbaric abbreviation of stagiaire, or apprentice, refers to an age-old custom that’s gaining currency in local kitchens. Young chefs wishing to scale the culinary ladder show up at the backdoor offering to “stage.” They dice carrots or peel potatoes gratis, in exchange for tutelage. C’est bon!