On Earth Day morning, Hawaiian music shimmers in the treetops and tangles with the already warm gusts of coastal wind. People come sauntering through the botanical garden’s open gate, outdoorsy types, slender and sun-toughened, lots of khaki and hiking shoes and crushable canvas hats. Temporary booths arranged in a great arc represent a spectrum of environmental aims, from whales to watersheds, from nature reserves to native birds. At one end of the garden, people sit cross-legged on the earth, beating bark into kapa cloth; nearby, others are stringing lei. The thick canopies of trees cast pools of deep shade, tempering the sand-dune heat of central Maui. The plants here have Hawaiian names and scientific names but no English names. Most have almost vanished from the Earth.

It has been fifty years since the first publication of Rachel Carson’s Silent Spring, a book that opened people’s eyes to the living (and dying) creatures that were getting crushed under the march of human progress. So much has changed in our minds since then. For example, half a century ago in Hawaii “reforestation” usually meant replacing the native plants, which were deemed commercially valueless, with alien eucalyptus, pine, and so on. Prevailing opinion did not wonder about the essential role of Hawaii’s native plants in the perpetuation of Hawaiian culture, nor did it wonder much about Hawaiian culture itself. After all, what we now call the Hawaiian Renaissance was still a decade or so in the future.

A lot has changed, as I say, in our minds. Perhaps not enough on the ground.

Consider the larger context, then, while ambling the breezy, six-plus acres of Maui Nui Botanical Gardens in Kahului. “Maui Nui” (or “greater Maui”) includes Molokai, Lanai, and Kahoolawe, all the components of the County of Maui. Nowhere else in this cluster of geographically related, sea-wrapped mountains can you easily park your car and stroll into a world populated entirely by native plants. The leaves are unfamiliar, the flowers subtle, the names unheard-of. But you’ll be looking into the authentic face of Hawaii, a botanical personality that evolved in perfect isolation by means of one accidental introduction every 35,000 years or so over millions of years. 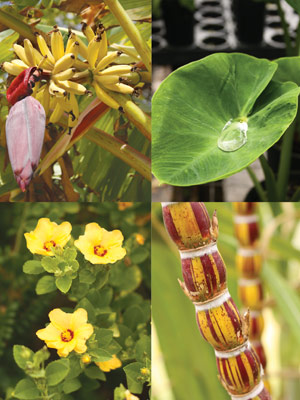 The rarity of this collection gives these gardens a mission, or missions, beyond what you find at most public gardens. For instance, prominently displayed in an array of large planters, a hardy stand of pua ala (a type of lobelia) demonstrates how peculiar Hawaiian plants can be. Known scientifically as Brighamia rockii St. John, a name that honors three important naturalists in the limited world of Island botany, this plant consists of one succulent elephant-leg-like trunk topped with a single daffy spray of spatula-shaped leaves and flowers like trumpets stretched ten times longer than absolutely necessary. In the wild today this plant exists only in one population on the backside sea cliffs of Molokai just east of Kalaupapa peninsula. Its presence at Maui Nui Botanical Gardens, along with other natives whose wild populations are now as few as just dozens of individuals, attests to the Gardens’ main purpose — to preserve plants on the verge of annihilation and to get them back out into the world where they belong.

Along with that mission, of course, is the need to tell stories. To educate the community. Says director Joylynn Paman, “Last year we had 600 to 700 students come to our presentations.” And she and her crew — there are only five — will often travel to the schools with their educational message. “Plants are a tool to connect people to the Hawaiian culture,” says Joy. Garden visitors can take advantage of no-charge docent tours as well as Hawaiian cultural workshops. Making dyes for kapa, for example.

As such a workshop implies, the Gardens’ missions go well beyond botany. To learn these plants without talking about native Hawaiian culture feels contrived; to understand the culture without knowing the plants is impossible.

This botanical garden has fostered the revival of old practices, and Joylynn brings a personal affinity to the task. A young mother with a buoyant nature, she has roots in such rural Maui regions as Keanae and Kahakuloa. “I was fortunate to spend childhood days in the streams and kuahiwi [mountains]. My whole lifestyle has been to malama aina [care for the land] and to appreciate what I was given as a child.” After earning a degree in marine science from the University of Hawaii Manoa, she worked at Kihei’s humpback whale sanctuary and helped lead the restoration of the adjacent old fishpond. For her, the Gardens extends that work and the greater momentum of the Hawaiian Renaissance. That’s why these six acres include a repository of Polynesian food plants — thirty types of ko (sugarcane), an internationally interesting collection of maia (bananas), and more than seventy of the eighty-four known varieties of kalo (taro). Maui Nui Botanical Gardens distributes these heritage varieties to island farmers. It also grows and sells native plants to home gardeners.

Native plants need less artificial irrigation. Home gardeners who plant them naturally use less water. That’s why the County of Maui values and supports this garden — because one of its missions is to educate the public about water conservation.

Finally, the garden is a social hub for an ever-changing cast of volunteers who call themselves the Weed and Pot Club — a name that literally describes what they do but is generally pronounced with a wry grin. They meet for pleasant gardening chores every Wednesday morning, a dozen or so faithful who are often joined by island visitors doing “voluntourism.” Says Janet Allan, club regular and Gardens board member, “Last week we were joined by a group of Canadians. They learned so much about native plants in just two hours that they actually thanked us for letting them volunteer!”

Janet’s own passion for the natives began years ago under the influence of the late Rene Sylva, a self-trained naturalist whose memory is revered by all who knew him. A turtle fisherman in youth, Sylva renounced his trade as soon as he realized that his prey were threatened with extinction. Instead he became a pioneer conservationist. His extraordinary knowledge of Hawaii’s endemic creatures derived from a lifetime of experience in the field, and he personally guided and coached some of the leading names in twentieth-century Island botany. Working on his own initiative, Sylva established the core Gardens collection back when the acreage housed a pathetic little zoo. At the end of the last century, the zoo having phased out, Lisa Schattenburg-Raymond led the initiative to incorporate Sylva’s garden as a nonprofit organization and became its first executive director. Joylynn Paman is her successor.

While talking about the history of the Gardens, Janet Allan kept saying, “The staff has held it together through thick and thin for years, and they are fabulous people. They all work very hard! You have to include this in your article.”

Such is the human fervor behind the botanical calm of Maui Nui Botanical Gardens, not an Eden but a dream of hope for renewal. There, Earth Day is every day.