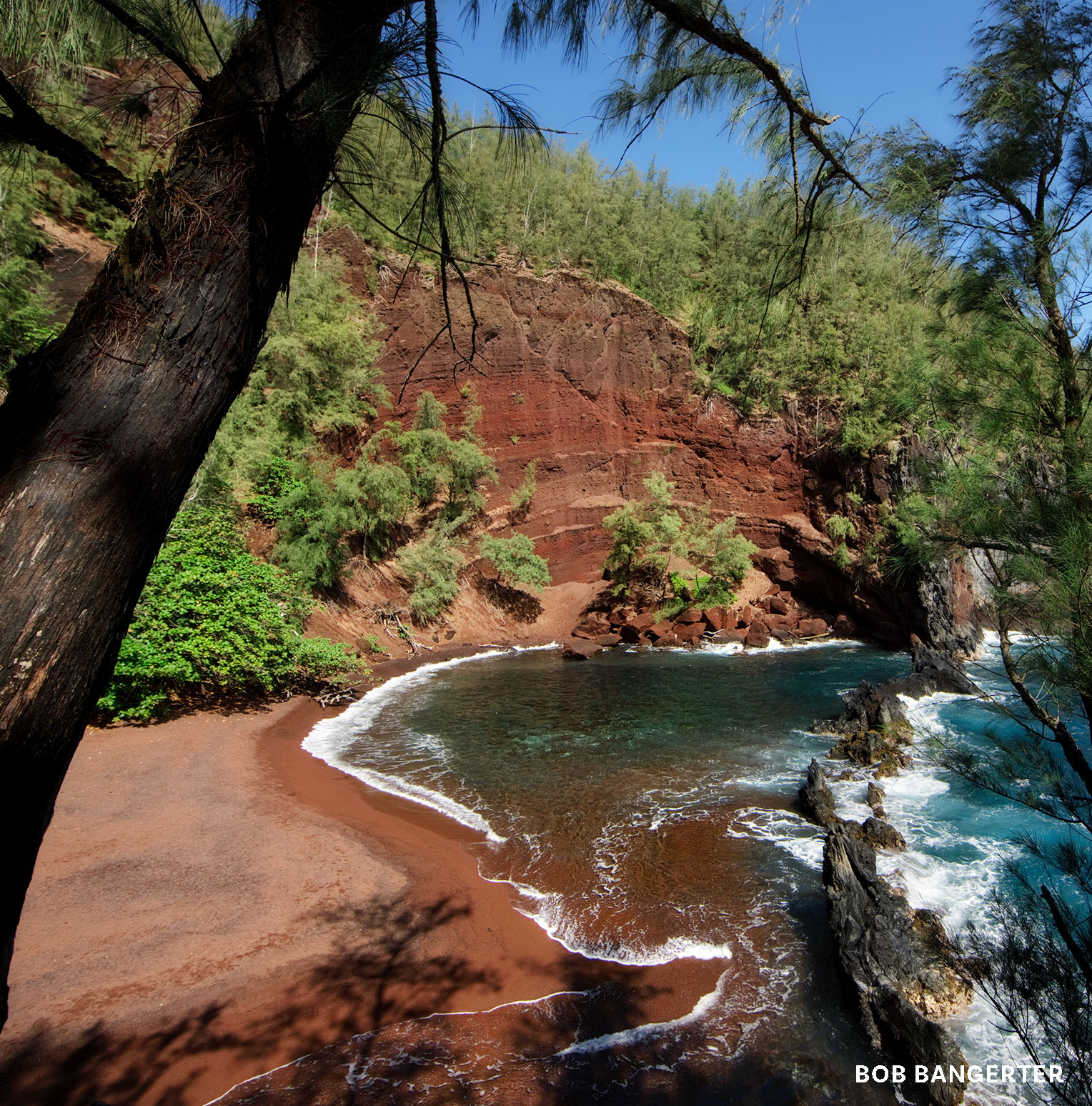 Listen: Do you expect sand to be red? Iron oxide red, red like your blood is red? The first time I saw it, I didn’t, either. “Red Sand Beach,” my friends said, opening the folded and varied gems of Hana like a fan.

“Red Sand Beach” is called Kaihalulu in an older tongue. Kai halulu: roaring sea. And although I do not remember it roaring that first day, I do remember something like a hum, a caul of sound that seemed part of the haze of light and the feeling of being outside of time. No matter how many times I go, when I round that corner and face the impossible color scheme of Kaihalulu, I am always adrift in the time stream.

Queen Kaahumanu was born here in Hana. No shrinking violet that one. The Kamehameha’s favorite wife. By all accounts a temptress and what my British friend would refer to as a “saucebox.” She was as smart as he, as quick-minded, and when he died she ruled through his son, Liholiho, a young man unprepared for the force that was Kaahumanu. She would be born somewhere stunning, somewhere that calls to mind an elemental force of life. A red-sand beach; yes, that fits Kaahumanu, queen.

Ah, but why is it red? For the same reason that so many of Hana’s corrugated tin roofs are red. Iron meets water, and burns in slow motion. Oxidation. Rust.

Hawaiian lavas well up from under the earth’s mantle and burn up and through to the air. That mantle, the crust of our blue ball, is a hodgepodge of chemistriessoil and rock mushed and mixed, dragged under and lifted up, rasped by glaciers and kneaded down by relentless oceans. The deeper the source of lava, however, the more iron it contains—and our Hawaiian lavas surge and seep from deep deep deep. Hawaiian islands rust as they age. Some places, like Kaihalulu, are ancient cinder cones with a high iron content and a porous structure. Water drains through it, water gets to it, and water helps turn it into red sand by oxidizing and dissolving it off the top, down the sides, and seaward. The waves happily take over from there and rub it back and forth until the edges of those raspy crumbles soften.

Against which, if I say so myself, the devastating blue of ocean looks fantastic.