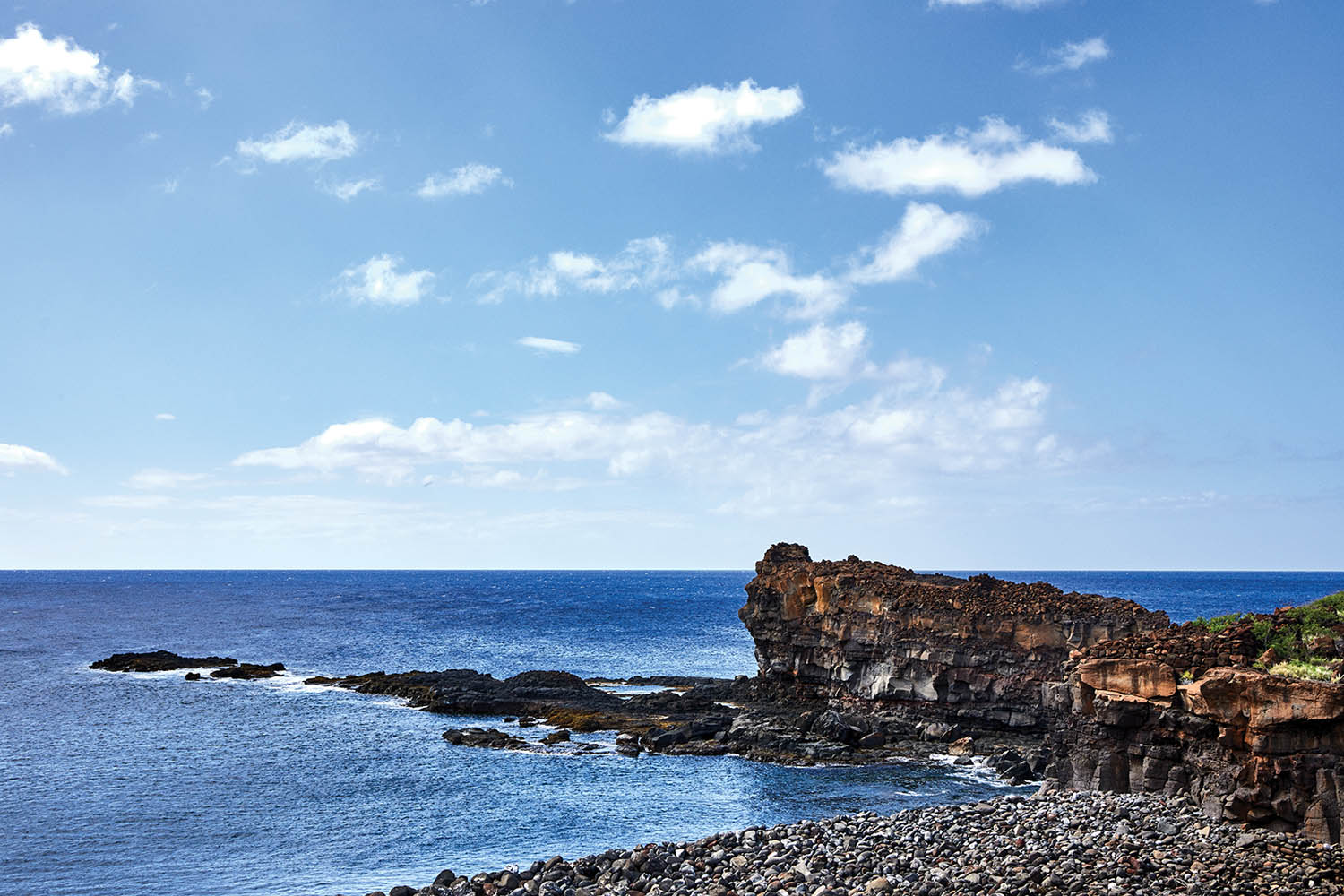 There are moments in our lives that come to define everything. Kepā Maly was a young teenager in Honolulu in the late 1960s dealing with challenging circumstances when he moved to Lāna‘i and was taken in as a keiki ho‘okama (foster child) of an older Hawaiian couple. Maly suddenly found himself living on land of great power among people of great aloha, learning the Hawaiian language and to live in the Hawaiian way. “They gave me a path, a direction,” he says now, fifty years later, of the kūpuna (Hawaiian elders) who took him in. “All of their own ‘ohana [family] were out leading lives and so they shared their stories, their spirit, with me. I know for a fact that had it not been for them, I would not be alive now.”

Maly says these words with humility and an absolute matter-of-factness, which is the way he speaks, from a solid and straightforward place of truth. He carries the same calm, kind energy that his adoptive kūpuna offered to him—an energy, he says, that ultimately emanates from the land itself. Maly has dedicated himself to Lāna‘i, to its land, its history, its people. And just as his kūpuna loved him and by so doing strengthened him, Maly now seeks to do the same for Lāna‘i, an island that has weathered much in the last century but that is now moving in a direction guided by three key principles: Preservation. Progress. Sustainability.

The museum that Kepā and his wife Onaona Pomroy Maly worked with community members to establish—the Lāna‘i Culture and Heritage Center (Lāna‘i CHC)—is situated at the east end of Dole Park, the park around which Lāna‘i City clusters. Under the couple’s steadfast leadership, the museum has embraced the duty of caretaking the past. Authenticity—an unwavering fidelity to veracity—is vitally important to Maly. “Everything we’ve done has been tied to ensuring that knowledge is correct,” he says. He notes the length of the island’s  story, from its initial emergence out of the sea one and a half million years ago to the arrival of the first plants, the first birds, the first humans. It is estimated that there were six thousand Hawaiians living on Lāna‘i when the first Westerners arrived in the Islands. The great changes that came next took a heavy toll on the island. In the late eighteenth century, chiefs from Hawai‘i Island swooped down on Lāna‘i, killing many of its peaceful residents. Western diseases carved down the population further, and botched experiments with ranching and sugar farming depleted Lāna‘i’s ecosystem. By 1922, when James Dole bought the entire island to create the world’s largest pineapple plantation, the native population was estimated to be 125, says Maly. Dole then brought in laborers from places as diverse as Japan and Puerto Rico—the ancestors of the majority of the island’s current population of three thousand-plus.

When the Lāna‘i Culture and Heritage Center was founded in 2007, the island was, Kepā says, “in a very difficult place.” The plantation had shut down its operations in 1992, the CEO of Castle & Cooke, David Murdock, had taken ownership of 97 percent of the island, and visitors at either of the island’s two resorts could rent Jeeps and wheel around a fragile landscape with little or no understanding of where they were. The ancient fishpond called Waia‘ōpae had been allowed to silt up to the surface with three feet of mud. Kapiha‘ā, in ancient times a renowned fishing village, sat next to a golf course and was choked in weedy kiawe (mesquite) trees. Part of Lāna‘i CHC’s initial business was to create guides to the island and its city, part of it was simply to retrieve Lāna‘i artifacts that had been carried away—for example, adzes, slingstones, and antique maps stashed away in museums and family collections. Young people of the island were “getting detached from their history,” says Maly.

It was a history that he had sought to learn ever since he’d arrived on Lāna‘i. He’d graduated from the local high school, but he attended without much interest in anything except wandering the island itself. While in high school he’d picked pineapple on the night shift so that he could explore the landscape in daylight, seeking out what he calls the “storied places,” a constellation of legends and former lives preserved in stones and trails and in the tales told by the elders. He met Onaona, who is of Hawaiian, Tahitian and Caucasian descent and who shares his passion for the culture; they have now been married for forty-three years. He moved to the island of O‘ahu and launched his unique career as an interpreter and naturalist, first at Kualoa Regional Park, then with the National Park Service both in Hawai‘i and on the continental United States, later as curator and exhibit designer for the Kaua‘i Museum. Always, Lāna‘i was his touchstone.

He couldn’t have known that five years after he and Onaona helped to found Lāna‘i CHC, a tech billionaire named Larry Ellison was going to purchase the island from Murdock. But in 2012 that’s precisely what happened: Ellison bought the island and his enterprise announced that it would seek to transform Lāna‘i into a model of sustainable living. Ellison sent a group of people from his company to speak to community leaders on Lāna‘i, to get a sense of the circumstances on the island and what people there thought the future could hold. Maly was among those they consulted. Lāna‘i would not be an easy investment, he told Ellison’s people, but it was a place of incredible richness.

A group formed to chart the future direction of the island: Pūlama Lāna‘i. Many know the Hawaiian word mālama, which means “to care for and steward,” but fewer are familiar with pūlama, which means “to cherish and treasure, to save.” It was Pūlama Lāna‘i that came up with the touchstone principles of the way forward: Preservation. Progress. Sustainability. Today it speaks of resource protection, renewable energy sources, restoration of the depleted watershed, controlling invasive species, and building informed leaders for the future. Maly is in charge of culture and historic preservation and it’s easy to hear his graceful voice whispering throughout the promising texts of Pūlama Lāna‘i. Out of respect for Ellison’s privacy, Maly prefers to say little about their interactions, though he will say, “He expresses a keen interest in and love for the history of place and that gives me encouragement.”

“Lāna‘i CHC had the original vision,” Maly says, “and Pūlama Lāna‘i has the resources to make it a reality.” In many ways, the museum has expanded to include the entire island. Residents who are now employed restoring kalo ponds, upgrading trails, or preserving forests also receive training in interpretation. They learn chants and legends associated with their work sites and part of their responsibility is to engage visitors and make them aware of place. In fact, everyone who works a paying job on Lāna‘i now gets an island guide and reference booklet. Education is key. “I believe strongly that most people will become engaged if they have knowledge of what they’re looking at,” says Maly. For example, a spectacular promontory called Kaunolū on Lāna‘i’s west coast includes a huge heiau (temple site) with unique petroglyphs depicting a legendary man-eating bird named Halulu, and a house platform constructed for Kamehameha I. Until recently the site was a secret, except to four-wheeling adventurers. Now a re-directed footpath and informative signs are helping to preserve the area.

Schools are a big part of this initiative. Lāna‘i CHC has written a curriculum such that the island itself becomes the classroom. Public school students travel to an ancient fishpond on Lāna‘i’s east coast. “We let them tramp through the mud-laden reef to stir up the mud,” says Maly. “Suddenly within a few days little pua, fingerlings, start to show up.” They learn to see the vivid evidence that Lāna‘i formerly enjoyed much greater rainfall. Damage done by cattle, deer, and plows has altered rainfall patterns, says Maly. “Rains used to be spread out over long periods. Now we get horrid downpours, then it’s dry for months at a time.” Overall, though, the museum’s educational message is that “restoration is possible, and we can do it in our lifetime.” The work is to create a model for other islands and the rest of the globe. “If we can’t do that on Lāna‘i, it bodes ill for the rest of the world,” Maly says. “A healthy land makes for healthy people. This is Hawaiian. Regardless of ethnicity, this is all Hawaiian.”