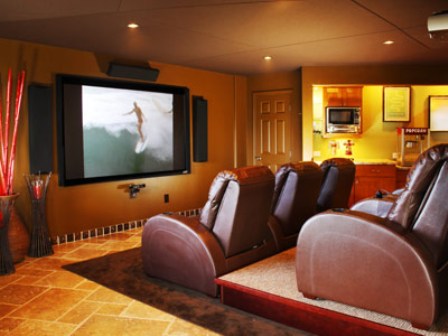 It used to be that when the kids moved out, that empty bedroom might become a den, a home office, or rec room. Today, it’s increasingly common to turn unused space into a home theater. A few thousand dollars at a big-box store will get you a ready-made system that’s a definite upgrade from a normal TV. But invest in professional consultation, design and installation, and you can transform a room into a theater experience as good as at the movies—maybe better.

A client named Will is a big fan of movies and video games. The downstairs of his two-story home was a huge open space with travertine floors, gym equipment in one corner, and a whole lot of reverberation. To add to the challenge, the space is hexagonal, with support columns and a plumbing chase smack dab in the center.

Will decided to put his remodeling money where his passion is. He hired Cary and Cheryl Smith, owners of At Home Theater. The Smiths design and install home theaters, and spend a good chunk of their workday staying abreast of technology; “state-of-the-art” changes about every three months!

The Smiths recommended closing off about a quarter of the downstairs space, as much to control the sound as to create a cozy theater environment. “People will buy $1,000 speakers, and if the room’s acoustics are bad, the intelligibility will be horrible,” Cary says. “Make the room quiet, and the sound will be clear with speakers half that price.” 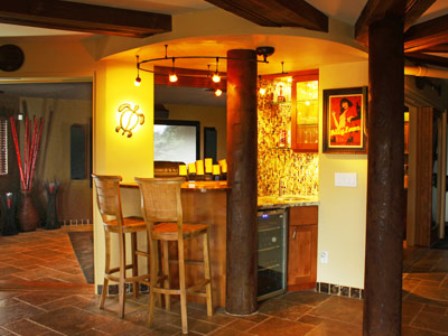 The Smiths soundproofed a wall shared by an adjacent rental unit, and installed speakers throughout the ceiling, covering them with an acoustically transparent fabric.

Most home theaters center around large-screen TVs. The Smiths recommended a projector and a 92-inch, high-tech polymer screen, instead. The quality of the picture is far superior, and the ceiling-mounted projector is out of the way and unobtrusive.

With Cary and Cheryl working on the theater aspects, Will called on me to design the overall space, which would also include conversation areas and a billiard table. “I’m spending a fair amount on the theater system,” he told me. “I’d like to dress up the room, but do it affordably.”

My first task as a designer was to figure out how to make this oddly shaped space work. The biggest challenge was making the structural details—the central columns and plumbing chase—look as though they had been planned. Taking advantage of the existing drain lines, I designed a bar that fits within those columns, complete with a small fridge, sink and cabinet. With a pass-through window to the theater, the bar can serve the whole room.

Will wanted to minimize construction, so rather than tearing out an existing closet in the theater room, we removed the doors and tracks and turned the wide, shallow space into a snack counter with a small popcorn machine, microwave and hot-dog cooker.

Wherever possible, I found alternatives to costly custom materials: off-the-shelf cabinets from Hawaii’s Finest In-Stock Cabinets, fridge and microwave from Sears. . . . At Home Depot, I found affordable glass-paneled doors that close off the theater, control the sound, and contain the air conditioning that’s in that space alone. Indolotus had teak butcher-block slabs thirty inches wide, twelve feet long, made from milling remnants. We used them for the bar and the top of a display cabinet, saving money and keeping materials out of the landfill.

For around $70,000, that unused downstairs has become a wonderful place for entertaining. You can create a home theater for less or a great deal more—the smart money is on working with the pros.

Rick Cowan has worked in every phase of Hawaii’s design and construction industries for the past twenty-five years. A certified kitchen-and-bath designer with the National Kitchen and Bath Association, and the owner of Archipelago Maui, Rick has won numerous awards for kitchen, bath and home design. His work has appeared in national publications like K&BB, Homescape and Transition Hawaii; and has been featured on Home & Garden TV’s Designers Challenge and What You Get for the Money. 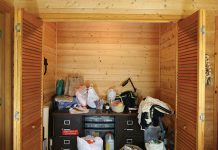