Call it divine intervention. Pulama Collier does. She was standing in line as a college freshman at UH Mānoa, ready to sign up for a Spanish class, when a gust of wind blew the class schedule out of her hands. When she picked it up, her eyes were drawn to the words “Hawaiian language.” The class was offered at exactly the same time as Spanish. “I didn’t think you could go somewhere and learn Hawaiian!

“You had to take hula to be a ‘proper’ Hawaiian child,” Pulama says, yet she grew up not knowing the language. Although her father was a native speaker, Hawaiian wasn’t the language of conversation in the home.

She says that in her first year of ‘ōlelo Hawai‘i, “things became very clear to me—how I was raised, the traditions I was taught by my father, the words he would use . . . the songs we would sing. A flood of voices started to come forth, connections of ‘aumākua, our ancestors that come before us. It was like seeing the world in colors for the first time.” As her proficiency grew, she was able to ‘ōlelo Hawai‘i with her father. After she became a teacher at the Pā‘ia immersion school, she brought him, as a kupuna, to her classroom.

Like ‘Ekela and Hōkūlani, Pulama has been a trailblazer, teaching on campuses across the island, from preschool to college, and in community adult education. Today she serves as Hawaiian resource teacher in the Kula Kaiapuni program at King Kekaulike High School.

She sees the evolution in Hawaiian education as more than just a growth in the number of schools and students. “I became [an immersion] teacher at Pā‘ia Elementary because I had a Hawaiian-language degree,” even though she felt unprepared. She says the quality of instruction she received was high, but the practice time was not what it is for today’s students. “After four years, they’re busting out those higher-level sentence patterns that took me years to learn. They’re more proficient in the range of the Hawaiian language, from classical to colloquial. It’s a beautiful thing.”

What empowers and inspires Hawaiian educators?

“There are certain things we hear a lot: kuleana [responsibility], the kūpuna intelligence, ancestral DNA . . . .” And then she says, “I have Hawaiian eyes. As a Hawaiian educator, a big goal for me is that my students see the world with Hawaiian eyes.

“It’s not how many hula you have to learn, it’s your na‘au; it’s how you sit with another and how you make them feel, and how they make you feel. If you feel the aloha and the blessing, you’re doing a Hawaiian thing.” 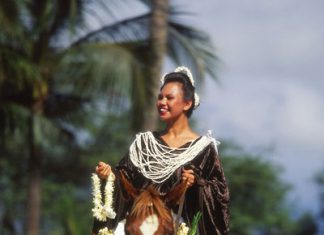 Hawaiian pa'u riders carry on an exuberant tradition, bedecking both horse and rider with flowers and fine fabrics.