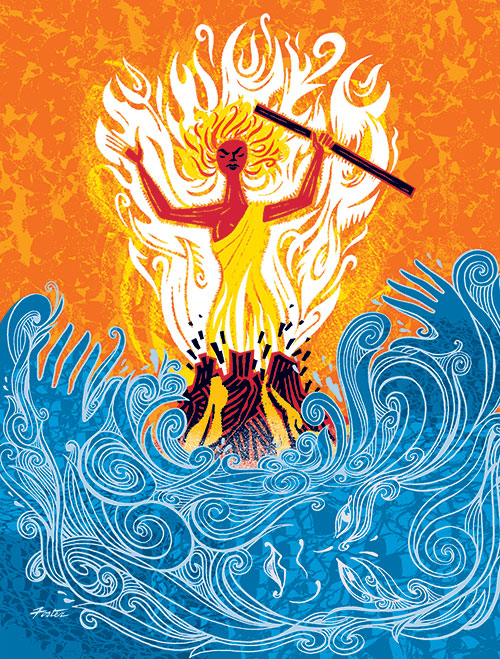 Unless you count Lō‘ihi — a seamount that won’t breach the ocean’s surface for tens of thousands of years — Hawai‘i Island is the only spot in the archipelago with active volcanoes. So it seems only natural to associate that place, in particular, with Pele. But of course, Hawai‘i’s volcano goddess can make her home anywhere in the Islands she pleases; as myth or metaphor, she created them. And although Haleakalā hasn’t erupted in more than two centuries, Maui plays a pivotal role in her legend.

That story begins in the South Pacific. Like the first Hawaiians, Pele came here by canoe, a voyager from afar. In his book Pele and Hiiaka, missionary son and scholar Nathaniel Emerson identifies the mystical floating island of Kuaihelani as the place of her birth — and the place from which she fled her older sister, the sea goddess Namakaokaha‘i. In one version of this ancient tale, Pele falls in love with Namakaokaha‘i’s husband, igniting her sibling’s wrath. Accompanied by several of her brothers and an egg containing her unborn baby sister, Hi‘iaka, Pele escapes in a double-hulled canoe and flees north, her older sister in hot pursuit.

“They go all the way up to the Northwestern Hawaiian Islands, then to Ni‘ihau, and work their way down the chain to Hawai‘i Island,” says Kapono‘ai Molitau, a Maui chanter and kumu hula (hula teacher). “On each island, Pele digs a firepit to build a home — only to have Namakaokaha‘i arrive and extinguish the flames, chasing her off.”

When Pele reaches Maui, she builds her home high up on Haleakalā, in a cinder cone named Pu‘uopele (hill of Pele). So tall a volcano is beyond Namakaokaha‘i’s reach, but one day when Pele descends to Hāna, her sister is waiting.

“Pele is still mortal at this point,” says Kau‘i Kanaka‘ole, whose family hails from Hawai‘i Island, and whose lineage as a kumu hula is that of Pele. “Namakaokaha‘i and Pele battle, and the sister tears her apart. The hillside where her bones are buried is called Kaiwiopele, ‘the bones of Pele.’ After the death of her physical form, Pele grows into her god self and travels in her spirit form to the Big Island, where she makes her home to this day.”

“Namakaokaha‘i thinks she has killed her sister,” says Molitau. “Then she sees [the smoke] at Halema‘uma‘u [on Hawai‘i Island] and understands that Pele [now a goddess] is still alive. The mo‘olelo, the story, isn’t over. Pele in her magma form is still creating land, and Namakaokaha‘i is still waiting at the ocean.”

Like so much else in Hawaiian lore, Pele’s story is rich with layers of meaning. On the planetary scale, her journey allegorically traces the geological evolution of the islands themselves, beginning with the oldest, Kure Atoll, in the Northwestern Hawaiian Islands, and ending at the youngest, Hawai‘i Island, at the chain’s southeastern tip.

Consider that. A thousand years before western science deduced tectonic plates, and that the Pacific Plate slides over a hotspot in the Earth’s crust, leaving a string of volcanic islands in its wake, early Polynesians — a Stone Age people — comprehended the archipelago’s chronology.

Bring your focus closer, and the battle between the two goddesses becomes a metaphor for the clash between two of nature’s elemental forces.

“Namakaokaha‘i is of the ocean,” says Molitau. “Pele is of the land. When these two meet, big explosions. It is a wondrous phenomenon,” he says; one visible today when magma from Kīlauea Volcano flows into the ocean along Hawai‘i Island’s Puna Coast.

Now bring your focus to the human scale. In Hawaiian culture, where no separation exists between humans and the natural world, Pele’s fight with Namakaokaha‘i is a coming-of-age story.

“Her death is part of Pele’s maturation,” says Kanaka‘ole. “The hallmark of Hawaiian culture is the family, and your parents aren’t your only teachers; everybody has an important role in raising the child. It seems the older siblings are the ones who challenge you the most. When you’re the older, you know the life lessons your younger siblings need to learn. Sometimes you have to make them happen. Namakaokaha‘i, the older sister, was already in her god self. The battle at Kaiwiopele helped Pele lose her physical body and become a god.”

Molitau concurs, adding, “I don’t see it as [uniquely] Hawaiian. No matter where you come from, older siblings have an interesting way of making things tough for the younger person. Sagas like Pele’s are parallel to our own families. We have beautiful ‘ohana we care for, and also amazing debates and fights. From those lessons, the younger person grows strong.”

Kapono‘ai Molitau is a cultural practitioner and the owner of Native Intelligence, a retail shop in Wailuku featuring Hawaiian crafts and design. Molitau was featured in the article “Giving Voice to a Culture” in the March-April 2008 issue of Maui Nō Ka ‘Oi Magazine.

Kau‘i Kanaka‘ole is executive director of Ala Kukui cultural retreat in Hāna. 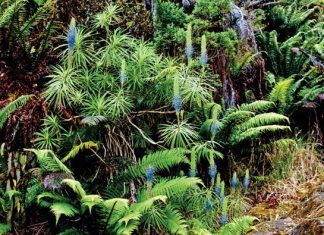 The Lobelia Grayana is an endangered lavender flower that grows in Waikamoi Preserve on Maui. Ancient Hawaiians called this plant opelu.